Age cannot wither him, nor custom stale his finite variety, though he does seem fractionally more concerned about his trousers falling down these days. The ungodly miracle of Iggy Pop, 66 years old, remains one of the most bizarre and compelling spectacles in rock’n’roll; more bizarre and compelling, perhaps, with every year that goes by. 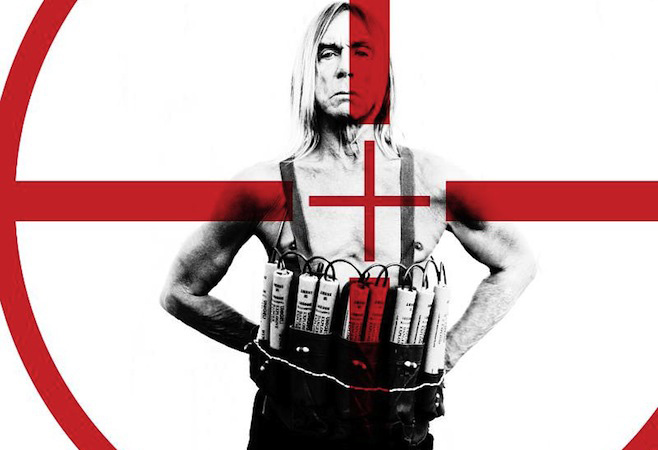 Age cannot wither him, nor custom stale his finite variety, though he does seem fractionally more concerned about his trousers falling down these days. The ungodly miracle of Iggy Pop, 66 years old, remains one of the most bizarre and compelling spectacles in rock’n’roll; more bizarre and compelling, perhaps, with every year that goes by.

Tonight is, more or less, business as usual. He arrives shirtless, drenches his preposterous body with mineral water about four times per song, throws himself around the stage and into the crowd, hams outrageously, and appears largely oblivious of the band playing behind him. That this band is currently helmed by his longtime nemesis, James Williamson, seems mostly irrelevant to him. There is no visible tension, because Pop and Williamson – the latter a technology geek and Sony’s former Vice President of Technology Standards, now enjoying a rather unusual retirement – are operating onstage in such different and private worlds.

The band does matter to Iggy, of course, since the evolving Stooges reunion has provided a creative and commercial rebirth these past few years. Scott Asheton is on sick leave (replaced by Toby Dammit, once of the Swans and Pop’s ‘90s band), but Williamson, Steve Mackay and the enthusiastically gurning Mike Watt (a Stooges bassist for roughly seven years longer than any of his predecessors) are a formidable unit, albeit one for whom subtlety remains, in general, a happily alien concept.

So, as part of a festival (Yoko Ono’s Meltdown) that has paid special attention to rock’s feminist trailblazers (I catch Savages and Kim Gordon’s new Body/Head project earlier in the evening), we get a 90-minute set that concludes with “Cock In My Pocket”, along with reassuringly Neolithic throbs through the canon: “Raw Power”, “1970”, “Search And Destroy”, a delirious run of “I Wanna Be Your Dog”, “No Fun” and “Your Pretty Face Is Going To Hell”. Mackay gets an extended sax solo at the end of a tremendous “Funhouse”, so that the stage can be cleared of the hundreds – literally, hundreds – of audience members who Iggy has invited up to join him (among the fine dancers, free spirits, exhibitionists, phone-wranglers and terrible old punk posers up there, my favourite is a slightly overawed beanpole in a cycling helmet).

The businesslike Williamson’s nuances are mostly lost in the torrential racket of it all, though he does get to play lap steel on a stagily reflective “The Departed”, the worst of the new “Ready To Die” songs. “Sex And Money” is probably the best, though, Ron Asheton fan that I am, I still prefer most of “The Weirdness” or, better yet, “Little Electric Chair” from “Skull Ring”. The new songs don’t last long, though, and Williamson’s presence also brings the bonus of “Night Theme”, “Johanna” and, notably, “Beyond The Law” from “Kill City”.

One suspects that Iggy will have to rope in Bowie next to advance his meticulous nostalgia programme, and how long the implacable Williamson can tolerate revisiting his youthful indiscretions remains to be seen. Still, fun, while it lasts.

As, improbably, is the opening set by Savages. If their recent debut album’s intensity occasionally pushes it close to a sort of unintentionally comic post-punk austerity, live, the drilled theatre of their performance makes a lot more sense. It helps that Ayse Hassan (bass), Gemma Thompson (guitar, inventive) and, especially, Fay Milton (drums) are superb musicians, and that the sometimes over-mannered Jehnny Beth’s stentorian roar is more like that of Patti Smith than that of Siouxsie Sioux.

And while some of the slower songs become a little bogged down in portent and FX (Thompson’s playing can recall The Edge, discomfortingly), the best ones – “Shut Up”, “No Face”, “Husbands” – have the sprung attack of early Wire. Best of all is “Hit Me”, revealed as a kind of art-psychobilly, though that may have been a delusion caused by the large bald man chicken dancing in front of the stage.

In between Savages and The Stooges’ performances in the Royal Festival Hall, there’s time to catch a few minutes of Kim Gordon and Bill Nace’s Body/Head, tonight augmented by the brilliant improvising drummer, Ikue Mori. As Gordon and Nace trade stunned riffs, ducking and feinting into each other’s technical areas, the whole thing is surprisingly nearer to rock – albeit strung-out noise-rock – than to some hermetically-sealed avant-garde.

In one of those weird apparent backflips of influence, they remind me of at least one band – Magik Markers – who have frequently been compared with the Gordon-fronted Sonic Youth. But this is a promising new venture, not least because it foregrounds the excellence and innovation of Gordon’s guitar-playing, generally less fidgety and more slurred, visceral, than that of her old bandmates Moore and Ranaldo.

As we leave, the guitars have dropped out for a moment, and Gordon’s words have become briefly decipherable. “It’s 1969 OK,” she’s chanting, “All across the USA.” Some things, as Iggy Pop and his doctors will doubtless tell you, never seem to change…

IGGY AND THE STOOGES SETLIST