Reviewed! Chris Forsyth And The Solar Motel Band – The Rarity Of Experience 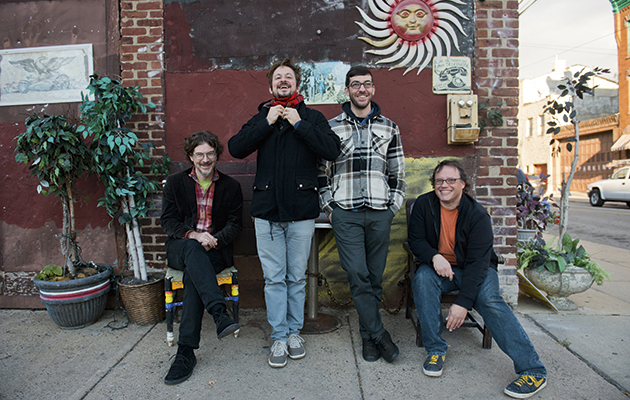 It’s possible to tell a lot about an artist not only by the songs they cover, but also the manner in which they choose to perform them. Here, Philadelphia-based guitarist Chris Forsyth closes The Rarity Of Experience with a version of Richard Thompson’s “The Calvary Cross”. While discretely respectful to the original, Forsyth maps his own path through the song – a long, winding journey showcasing the formidable clarity of Forsyth’s playing. The rest of The Rarity Of Experience bristles with similar moments of high drama – expansive jams interwoven with razor-sharp dynamics. This album pushes and pulls in so many directions, it should fall apart; remarkably, it doesn’t.

The Rarity Of Experience is the second album recorded with Forsyth’s Solar Motel Band, whose line-up features Peter Kerlin (bass) and Steven Urgo (drums). The band’s previous record, 2014’s Intensity Ghost, foregrounded the formidable interplay between Forsyth and Paul Sukeena, whose twin guitars evoke great tag-teams passim like Neil Young and Danny Whitten, Lou Reed and Robert Quine or – most pertinently – Tom Verlaine and Richard Lloyd. There are changes afoot on The Rarity Of Experience. Not only has Paul Sukeena been replaced by Nick Millevoi, but the album’s opener “Anthem I” begins with an oscillating synth line (courtesy of Jamie Fennelly, from Forsyth’s previous band, Peeesseye); elsewhere, Forsyth sings.

But the alterations are not just cosmetic. The album’s wide-ranging scope is critical. The Rarity Of Experience is a double album: most of the material on Disc One has been honed on the road for the last year, while the second disc is more experimental in nature. Forsyth has also re-recorded some tracks from elsewhere in his catalogue that fit in with his current set. Both discs reflect the different aspects of Forsyth: the formidable guitarist with a killer live band and the improvisatory musician operating on the fringes of space rock and free jazz.

The first three minutes of “Anthem II” are an explosive showcase for the band’s strengths. Driven by Urgo’s pounding drums and Kerlin’s vigorous basslines, the guitars weave and rut, alternately squalling and keening. “The Rarity Of Experience Pt 1” – a compact 2:23, the shortest track here – finds Forsyth singing in a dryly disaffected voice not unlike Thurston Moore (Moore and Ranaldo are perhaps another comparable pairing to Forsyth and Millevoi). Meanwhile, the descending guitar motif of “… Pt 2”, threatens to burst into “Marquee Moon” at a moment’s notice. Buttressed by echoey organ stabs from regular collaborator Shawn Hansen, it reveals taut, New Wave rhythms, echoed by Forsyth’s minimalistic lyrics: “Think once/Think twice/Can’t think/Soul on ice”.

The 10-minute “High Castle Rock” never breaks its energy; each part of the song is a conduit to another delirious Forsyth solo or else it simply ploughs on forward, powered by the band’s formidable rhythm section. The mic setup on Urgo’s drums captures a deep, resonant boom that provides a solid foundation for the febrile playing of the two guitarists. “High Castle Rock” also makes clear the distinctions between Forsyth and Millevoi’s playing. Forsyth seems to chisel out each chiming note – he studied guitar with Richard Lloyd in the late 1990s – whereas Millevoi favours tight, spidery scrabblings that occasionally recall Nels Cline. Disc One finishes with “Harmonious Dance”, a looser, more cosmic number that loops round a mellifluous guitar refrain.

Disc Two opens with the outstanding “The First Ten Minutes Of Cocksucker Blues”: an imagined alternative score to the beginning of Robert Frank’s 1972 Stones doc that pulses with a period-authentic sense of menace. Forsyth originally recorded this on 2012’s solo set, Kenzo Deluxe; for this version, the band is joined by free jazz player Daniel Carter, whose woozy saxophone and trumpet lines add sinister undercurrents to the song. Elsewhere, Forsyth’s guitar on the down-tempo “Boston Street Lullabye” recalls the sepulchral twang of Low’s Alan Sparhawk. Initially favouring some graceful acoustic strumming, “Old Phase” slowly builds itself to full strength as Forsyth and Sukeena’s guitar lines spiral and rise with fine fluidity. The album closes with “The Calvary Cross”: Thompson’s mysterious invocation to his poetic muse. The song’s blank verse suits Forsyth’s semi-spoken delivery here. But presumably taking his cue from the extended live version included on Thompson’s (guitar/vocal) album, Forsyth’s version is marvelously digressive; a fitting coda to an album rich in such extemporisations.

As for Forsyth himself, “The Calvary Cross” can perhaps been seen as a neat metaphor for his career to date. “My claw’s in you and my light’s in you,” the song goes, highlighting the creative urges that are currently driving Forsyth onwards, never quite taking the same route twice.