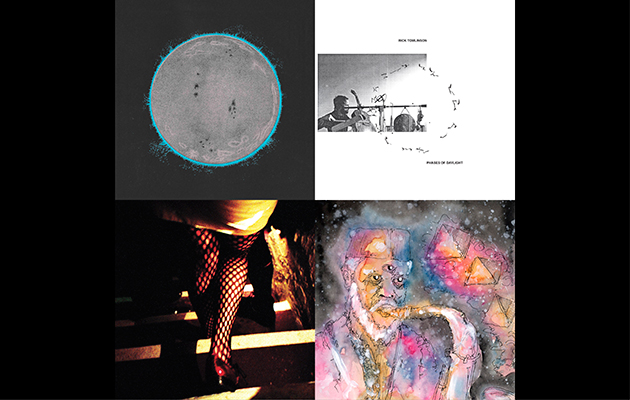 Lots of big names and so on in the new issue of Uncut that I wrote about here (Roger Waters, Evan Dando, Jason Isbell, Steve Van Zandt included). One of my favourite things in there, though, is Graeme Thomson’s interview with Paul Major, frontman of the great Endless Boogie and, now, the author of a lavish memoir. Face The Music: The Psychedelic Worlds Of Paul Major is a vivid tale of extreme record-collecting, and one of the stranger collateral effects it may have is to bring Major’s band, if not exactly into the mainstream, then at least a little closer to the spotlight that they so richly deserve.

In an unusual display of multi-platform co-ordination, Endless Boogie have a new album out around the same time as Face The Music and, as ever, it’s a masterclass in progressive choogling. Endless Boogie’s mission statement, inherent in their name, still holds good on what is either their fourth or sixth album (depending on which head’s counting). Vibe Killer, though, pursues the deep mantric possibilities that came to the fore on 2013’s classic Long Island, so that the title track very roughly resembles a meditation tape concocted by Malcolm Young and Klaus Dinger. There’s a new layer of keyboard funk running through the likes of “Bishops At Large”, while “High Drag, Hard Doin’” revisits the belt-buckle stomp of early albums like Focus Level (2008). But those gnarled slow jams proliferate, as Paul Major privileges gruff narratives over Beefheartian holler. “Back In ‘74”, involving Kiss, a kite-flying contest, and a herd of art students with shaved eyebrows, is a particular keeper.

A few more recent albums I like a lot, starting once again in Chicago. Ryley Walker’s productivity and networking skills have meant that most every Uncut reviews section now comes with a range of albums featuring what we might usefully call the Ryley Diaspora. This month, it was the turn of Bill Mackay, a folk/jazz/experimental vet of the Chicago scene, who duetted with Walker on 2015’s Land Of Plenty and intermittently figures in his live band. Mackay’s first Drag City set, Esker, works as a neat sampler of his unshowy virtuosity, at once brisk and mellow. Atmospheric minimalism (“Persona”) can be endearingly jaunty, while “Candy” locates a sweet spot somewhere between Fahey and Django. The Michael Rother twang of “Wail”, meanwhile, makes for a graceful companion piece to William Tyler’s Modern Country.

From a similar, orbit, Emmett Kelly’s career roughly falls into two streams: adding filigree guitar backup to the likes of Will Oldham, Joshua Abrams and Ty Segall; and auditioning as Jim McGuinn’s stunt double. That’s Jim rather than Roger McGuinn, because Kelly’s solo records as The Cairo Gang often sound like immaculate homages to the early Byrds, not least the new Untouchable; “Real Enough To Believe”, with its beautifully arching Rickenbacker break, could easily be smuggled onto Side Two of Turn! Turn! Turn! Six albums into the Cairo Gang’s catalogue, such flagrant imitation should be played out, but Kelly’s craftsmanship ensures Untouchable is a deeply satisfying 32 minutes. Segall co-produces, and encourages a little more glam/garage abandon. And credit for another groovy departure: “That’s When It’s Over”, which brilliantly fuses “Sweet Jane” and “Hey Joe” in all but name.

Regarding My Pharaoh, My King by Anthony Pasquarosa & John Moloney, the Pharaoh in question is Pharaoh Sanders, portrayed on the front cover in a suitably cosmic painting. But the homage of Moloney (veteran of Sunburned Hand Of The Man and various Thurston Moore projects, as well as drummer on that killer Wet Tuna jam I’ve mentioned ad nauseam this year) and Pasquarosa (a new name to me, I must confess) is more impressionistic than explicit. In the absence of any saxophone, they try and make sense of the possibilities suggested by spiritual jazz with an acoustic guitar and a drumkit. As a consequence, My Pharaoh… sounds more like Sandy Bull and Billy Higgins’ collaborations, aligning the duo with similar recent jazz/folk face-offs by Steve Gunn & John Truscinski and Ryley Walker & Charles Rumback. And while Pasquarosa might not be as feted as Gunn and Walker, he’s every bit their equal on swinging ragas like “For John, After Ali”.

Lastly, a very low-key vinyl-only album from British psych outlier Rick Tomlinson. Around a decade ago, guitarist Tomlinson made a cult name for himself as a kind of Lancastrian analogue to Six Organs Of Admittance, making fine psych-folk records as Voice Of The Seven Woods and Voice Of The Seven Thunders. Mostly AWOL since 2010, Tomlinson’s return, Phases Of Daylight, is a strange and lovely thing. Over eight tracks, he only picks up a guitar (acoustic) twice, preferring to create spare, devotional soundscapes using various bits of hand percussion, bamboo flutes, analogue synths, ouds and, most strikingly, a cornet. The results are at once serene and unsettling, a kind of naïve temple jazz that reaches its apotheosis on “Visual Spirit”, akin to a Tibetan Buddhist ritual enacted by Miles Davis. Miles in the Bardo, maybe?