REM on Out Of Time: “This is a record of challenges” 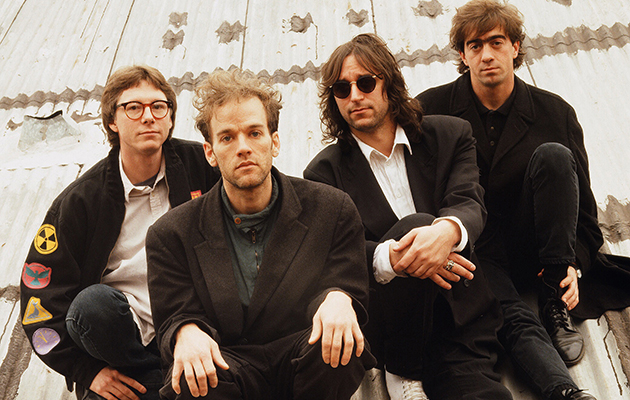 The wisdom of Michael Stipe is put to the test, as REM retire from touring and expand their sound on Out Of Time. Gavin Martin takes the Athens heritage tour… “I’ve never written upfront love songs,” says Stipe, I’ve never lip-synched in videos…” Originally published in NME’s 23/03/91 issue, and reprinted in Uncut’s REM Ultimate Music Guide.

Michael Stipe’s car stinks. Michael is reversing it out of the parking lot beside the wooden 18th-Century carriage office in Athens, Georgia, that houses REM’s small rehearsal room and management headquarters.

The journalist is squeezed into the back seat with thick crusts of mud and a large bundle of coarse, uprooted brown grass. Stipe says he stole the grass and plans to plant it in his garden, along with some recently acquired Georgia pines. The grass smells like it’s provided a home for several dogs in the interim, some of them dead ones.

A few minutes ago, Stipe was in the REM office discussing deals and demos for local bands with Peter Buck, suggesting suitable poster photos for advertising the new LP, pondering possible benefit concerts and feigning amazement that only a few days previously he was mistaken for a secretary when answering the office phone.

“He didn’t recognise me? Didn’t recognise what is probably the most distinctive and important voice in American rock’n’roll today…?” Then Stipe stood in the middle of the office gazing at the sweet-smelling pine striplings. His face, which has deep crevices and can look stern and aged, was all boyish and wide-eyed, as he gave us a fulsome and impassioned account of the history, beauty and cultivation of Georgia’s state tree.

But right now the pines are laid out on a desk upstairs and the fetid odour of the recently liberated marsh grass is filling up his Volvo estate. The singer is oblivious to the hum. He’s busy telling us about his car window sticker, which urges the good folk of Athens to “Vote Gwen O’Looney”, as indeed they did when they made her Mayor some months back. Stipe says this was a long overdue chink in the armour of the “fat white boys’ club” that tends to steer local politics in these parts. But his excitement is tempered by the awareness that the O’Looney factor could turn
into “a Jane Fonda thing”.

By his own admission a pretty haphazard driver, Stipe swings a right at the lights as he points out “ye olde court house” and “yonder warehouse district” – local buildings under threat from bullish building contractors. “What this place needs,” he muses, “is a radical political fringe.”

Stipe is taking us back in time. We are driving down to the still functioning wooden railway bridge featured on the cover of the first REM album Murmur. It was Peter Buck who mooted the idea, not for reasons of nostalgia, but because it was an involving landmark that matched the photographer’s request for an interesting backdrop.

“Yes,” said Buck, “especially with a band like ours, you want to find something that is going to distract from the faces as much as possible.”

On the eve of the release of their second major label album, Out Of Time, the three “faceless” REM men and the hyperactive, newly-goateed Stipe line up under the bridge, which runs over a river five minutes from Athens town centre.

Today is President’s Day, a US public holiday. Downtown Wuxtry Records, the shop where Peter Buck once worked and first fuelled his cosmopolitan and “pretty major” vinyl addiction, is closed, and the winos are raiding the bottle bank. You can walk round the town and come upon a plaque commemorating the Civil War on nearly every corner, but Athens is kind of sleepy today. Behind the bridge a few kids have turned up to taunt the hat-swirling, constantly singing Stipe and his cohorts, punctuating the photo shoot with a chorus of “What the fuck y’all doing?”

None of the group seem too sure exactly what President’s Day is celebrating. They are more excited by the news that fate has decreed their new album is timed for release on Jack Kerouac’s birthday. Out Of Time is a whirlwind of styles and song structures, a study in all kinds of emotional extremism. Coming after their fin de siècle masterpiece Green (released two-and-a-half years ago on George Bush’s inauguration day) and the accompanying mould-breaking, corporate-lambasting stadium shows, the album is a pause for breath and a profound assessment of themselves and their abilities.

There will be no exhausting world tour trek to accompany Out Of Time. By mutual consent the group have agreed that, with the Green tour (captured on majestically bonkers video TourFilm), they came close to burnout. Though some members seems to regret it more than others, the fact remains that, after spending the best part of a decade travelling the backroad bars and forgotten towns of the heartland, America’s foremost grassroots rock’n’roll roadshow is both out of time
and off the road.

The public’s loss has been the recording studio’s gain. Peter Buck says he can’t decide whether the band are “a democracy or a communism that actually works” and the record bears him out. A reluctant guitar hero, Buck swaps his axe for mandolin for most of the record. “Thank God,” he says. “I was almost getting competent.”

Mike Mills takes lead vocals on two tracks, Michael Stipe dispenses with voice entirely for his tune “Endgame”, an orchestral instrumental highlighting the newly baroque-besotted Buck. On several tracks there are no drums, so sticksman Bill Berry keeps time by playing the bass.

Elsewhere there are guest vocalists (Stipe favourites – activist rapper KRS-One and hometown legend B-52 Kate Pierson), sax players, extra keyboardists, extra guitarists and – would we lie to you? – The Atlanta Symphony Orchestra.

Bill Berry, while voicing regret that the group can no longer do the things they used to do on the road, says it’s “the record we were always too cautious to make in the past, probably because we knew we had a tour. This time, due to the success of Green, we didn’t have to go out on tour.”

Mike Mills, who was Berry’s best friend when the pair met up with Buck and Stipe at the end of the ’70s, is responsible for many of the group’s snap-jawed, counterpoint harmonies. He believes this interaction is the key: “I love harmony, I always have. We’re very fortunate we have three people who can sing in this band. I sing, I’ve always sung, Bill has always sung, but it still seems to come as a surprise to y’all. I think it’s what sets us apart. One line of harmony can make or break a song.”