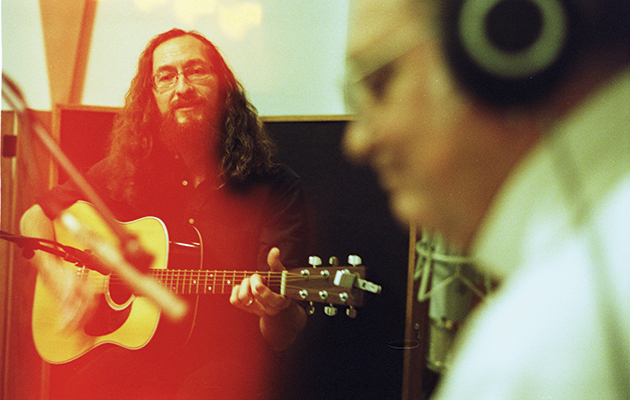 Confusing, would probably be the most sensible answer. On paper, Psychic Temple suggest a record store nerd has gone crazy with a vintage A&R Rolodex. In practice, their low-key run of albums these past few years have been remarkably cohesive, even as their frontman and networking maestro, Chris Schlarb, dips into as many genres as he has contacts. Jazz, country-rock, folk-soul, improvised and ambient music all play key parts on Psychic Temple IV, but what binds them together is a certain beatific take on Southern Californian pop. It’s the sound of a fantasy Los Angeles made flesh; one of those rare albums where its maker can cite Brian Wilson’s “teenage symphonies to God” ambition and be more or less justified in his presumption.

The heaviest Beach Boys reference comes at the end of Psychic Temple IV, as the instrumental “Isabella Ocean Blue” takes a similar measured path into the sunset as “Pet Sounds”, down to the sighing horn charts and a persistent twitch of Latin percussion deep in the mix. For all the formal grandeur, though, there’s also a sense of free spirits being allowed the space to manoeuvre, most notably when Schlarb himself lets rip a 12-string guitar solo, a splattery action painting of notes that’s closer to Sonny Sharrock than Jerry Cole, but which still doesn’t undermine the prevailing calm.

It’s an indication of how Schlarb’s vision for his band has evolved from relatively avant-garde beginnings into the nuanced, classical songforms that grace Psychic Temple IV and last year’s Psychic Temple III, without losing that experimental imperative. A Long Beach studio owner and composer for video games, Schlarb embarked on the first Psychic Temple project wanting “to hear an ambient record with two jazz drummers on it”. Gradually, the songs came into focus, via covers (The Beach Boys’ “’Til I Die”, Joe Jackson’s “Steppin’ Out” on 2013’s Psychic Temple II), sessions at FAME Studios in Muscle Shoals, and those auspicious guest players.

Psychic Temple IV was born in the same 2016 sessions that produced another terrific album, Psychic Temple Plays Music For Airports (I wrote a bit about it here)., in which Eno’s ambient meditation was re-imagined by a large band of jazz improvisers, and came out sounding akin to Miles Davis’ In A Silent Way. That same air of concentrated nonchalance provides the backdrop for the ten lovely songs on Psychic Temple IV; a cool space in which Schlarb can display his increasingly finessed songwriting.

Again, it’s hard to pay full attention to Schlarb’s skill when one is constantly distracted by the discreet virtuosity he encourages from his guests. Most notably, Terry Reid (who Schlarb met when he was recording one of Superlungs’ live shows) drops by to add wavering harmonies to “Dream Dictionary”, “Turn Off The Lights” and “If I Don’t Leave, They’ll Take Me Away”. Reid is a little more ragged than in his youth, but there are some tantalising moments, especially in “Dream Dictionary”, when he jousts with and seems about to soar away from the gentler, unassuming tones of Schlarb. Such small tensions add shade to the mellowness.

Even Reid is upstaged on “Turn Off The Lights”, as Dave Easley coaxes an uncanny sitar effect out of his pedal steel, a rare example of Psychic Temple living up to the psychedelic exoticism of their name. Inevitably with musicians so historically aware, comparisons keep presenting themselves – a minimalist Steely Dan, perhaps, on “SOS” and its ravishing sequence of micro-solos; the jazz-club sadcore of early sides by another undervalued LA band, Spain. But the dexterity with which Schlarb conducts his affairs, and the craftsmanship and spontaneity underpinning all these bewitchingly hazy progressions, make Psychic Temple a lot more than the sum of their considerable parts. Better than the average cult band, for sure.

Can you tell us about where you’re from, your musical history, how the Psychic Temple project evolved?

“The first Psychic Temple album came about because I wanted to hear an ambient record with two jazz drummers on it. I couldn’t find one, so I made it myself. It took a couple of years. The desire to hear something caused me to learn all this new stuff. I had to become a better musician and audio engineer. I started playing with Mick Rossi from the Philip Glass Ensemble and Mike Watt on that album and it demanded more of me. You can really hear a progression of musical ideas over the course of these records.

“The second album was half instrumental and half vocal and on Psychic Temple III the focus really shifted to vocal music. I started singing and went down to FAME in Muscle Shoals to work with some of the Swampers. On IV, my desire was to get everyone in a room together and record this new batch of songs. I wanted to get that Wrecking Crew vibe so we brought in all the musicians and tried to do as much as possible at once.”

Psychic Temple seems from the outside to be a kind of sprawling collective in constant flux: is that how you envisage it?

“It’s funny, at a certain point I just started calling it a cult because of the way any band works under a leader with a vision. I mean, bands and cults are VERY similar. When you go on tour, you’re driving from city to city proselytizing and trying to gain a fanbase… followers, if you will. You dress in a certain costume or uniform. I think most bands are serving one vision at a time. Psychic Temple is definitely my vision. It’s my aesthetic. However, all I care about is the music and serving the song. Not my ego. I’m not trying to play every instrument on the record. I’m trying to find the best musicians I can to serve or draw the best out in the music. That’s really all I care about.”

How did you hook up with Terry Reid?

“I was asked to record a live performance that Terry gave in Long Beach a couple years ago and we started talking on the phone. He was really pleased with the recording I made for him and I planted the seed of working on the new Psychic Temple album together. It took a while for it to come together but I wrote three songs for us to sing as duets and I really just wanted him to shine. He deserves it. I mean, Seed of Memory is one of my favourite albums. He wound up playing guitar on two songs and singing on three. We knocked them all out in a single day at the studio.”

This morning I drove into the desert and visited a British cowboy. We swapped records, sang Louvin Brothers tunes, and made some plans. pic.twitter.com/JeXIgAQHZH

And also Max Bennett? What’s his playing like at 89?

“There’s a funny story about Max being on the album. Basically, I had Carol Kaye in mind. I took lessons from her years back and reached out to her on a previous record but she declined. When I started writing this new batch of songs I reached out to an artist in LA to play bass and he agreed but only if I wouldn’t take pictures of him in the studio or use his name. I wasn’t sure how to respond to that and thought it was a hedge against the songs not being any good. Long story short, I just told him to forget it. No one else was coming to the session with that kind of trip. So I sent Max Bennett an email and he called me an hour later. He said he listened to my previous records and really enjoyed the music. He was 87 at the time! I mean, Max played on some of my favourite albums of all time: Zappa’s Hot Rats, Joni’s Court & Spark, Hissing of Summer Lawns, the double bass on Hejira. He came down to the studio, wrote his charts out, brought a bag of almonds and played his ass off.”

Given you’ve also worked with Spooner Oldham, David Hood, Mike Watt etc in the past, who else is on your hitlist of dream collaborators?

“I just produced guitarist Mike Baggetta’s new record with Jim Keltner on drums and Mike Watt on bass. That was a dream come true. I’ve definitely got a list of folks I’d love to work with but I’m usually inspired by musical situations and not a name game sort of approach. When I hear a piece of music, I want to think of an exciting group of musicians to play it.”

Do you have multiple projects on the go simultaneously? I remember you telling me you’d been working with Terry Reid a year ago?

“My wife and I own a recording studio in Long Beach called BIG EGO and I make my living producing records. I’ve done about two dozen in the last year so I’m always working on a few things at the same time. I just finished a great record called Swing Set for Jazzy Ash. It’s a kids’ record but we recorded the whole thing live in the room and it doesn’t sound anything like the terrible kids music that is being released today. We’re starting up BIG EGO records this summer. I’ve just got so many great records in the archive that it’s time to get them into the world.”

In some ways, IV feels like a combination of III and the Music For Airports sessions: elevated South Californian pop, but with the jazz influence, while still discreet, moving a little closer to the surface. Does that make sense to you?

“That makes perfect sense to me! The first recording date on IV was Saturday, August 15th, 2015. That was with Max Bennett on bass and Avi Buffalo on electric guitar. We recorded four songs (Spanish Beach, Wait For Me, Paper Tiger, and Nazarene Dream) at that session. The very next day, Sunday the 16th we recorded Music For Airports. So it was done in the same room with a lot of the same musicians on the same weekend. I probably wouldn’t put myself in that kind of position again as I seem to remember my fretting hand was not in great shape for the Music For Airports session but dammit if it didn’t turn out alright.”