In praise of Pedro Almodovar’s Julieta 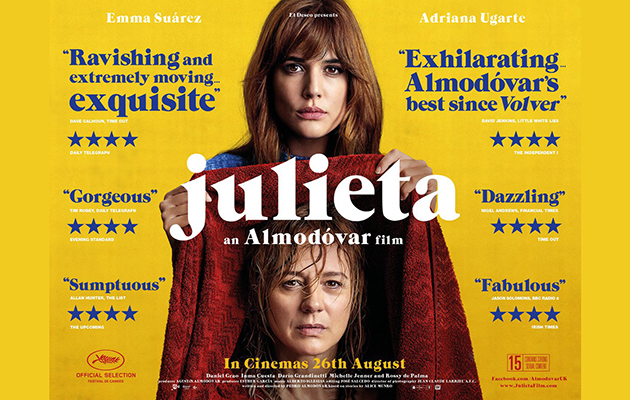 After a detour into high camp comedy with I’m So Excited!, Pedro Almodovar elegantly returns to his natural habitat: moody melodrama centred around notions of yearning, memory and loss and populated by strong female characters. The film is an adaptation of three inter-related short stories by Alice Munro, but Almodovar’s other influences are also evident. “I feel like a character in a Patricia Highsmith novel,” remarks one, while the plot’s gradual unravelling – involving a mysterious death, a meeting on a train and a blonde-haired heroine – inevitably recall Hitchcock’s favourite filmmaker tropes.

When Almodovar first introduces us to Julieta (Emma Suárez), she is living in preparing to leave Spain for a new life in Portugal with her partner Lorenzo (Dario Grandinetti). But there is a sorrow in Julieta that cannot be lifted, as she drifts enigmatically through generously proportioned and stylishly designed apartments, staring listlessly at some nice painting and drinking expensive wine from thin-stemmed glasses. A chance encounter (is there any other kind?) reveals that she has an estranged daughter, Antía; news of her current life sends Almodovar into full-on flashback mode, to Julieta when she was 25 (played by Adriana Ugarte) and she first met Xoan (Daniel Groa), who later became Antía’s father.

Keen followers of Almodovar will find much to comment Julieta: it may not entirely be in the amazing run that stretched through All About My Mother, Talk To Her, Bad Education and Volver, though it shares their poise and confidence. It has, though, an unusually rich seam of melancholia running through it – a rarity for Almodovar, who is rarely liable to such sentiment. It seems that, aged 66, the great Spanish filmmaker might be coming to terms with his own maturity, at long last.