Pixies’ Black Francis: “It wasn’t about trying to represent our generation – it was high art” 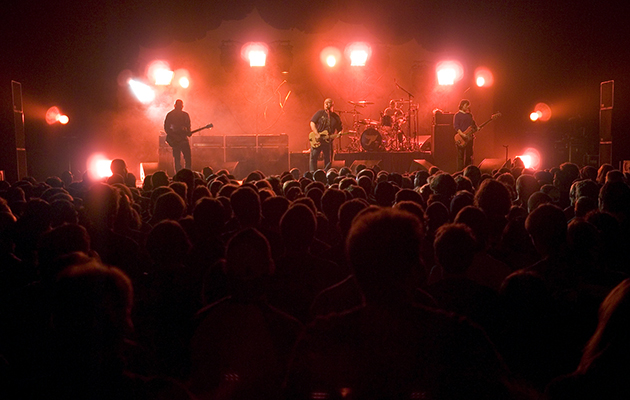 It was the comeback they said would never, could never, happen. But in 2004, the Pixies reformed, and blew everyone’s minds again. Here, the band who invented Nirvana and Radiohead speak exclusively to Uncut about their dramatic rise and fall and rise again. Words: Nick Hasted. Originally published in Uncut’s December 2004 issue (Take 91).

“I didn’t do those songs for a long time, because I was already demonised and made a fool of – ‘Oh yeah, he used to be cool, and look at him now! He’s hardly selling any records, the fucking idiot!’ So I felt, I’m not going to give people more fuel and go up there and sing ‘Monkey Gone To Heaven’, so they could go, ‘Yeah look at him, the only decent song is his old hit.'”

It’s September 2004, and Charles Thompson, aka Frank Black, aka Black Francis, is in an LA hotel room, midway through the triumphant tour that has reunited his band the Pixies after 12 long years, and seen his reputation miraculously revived. But he hasn’t forgotten the contempt heaped on him in the time between. He has some scores he’s been itching to settle, and he’s about to explode with rage.

“It’s frustrating to think, ‘Oh yeah, I was a genius five years ago, and now I’m an idiot’,” he simmers. “That doesn’t add up for me, neither one. It bothers me when people get personal and lampoon me because I’m overweight, or because I have male-pattern baldness. I’m 39 years old, you dumb fuck. You think I’m gonna go and get a fucking hair transplant? I don’t really give a shit if I have a bald spot on my skull. Does that mean I’m not supposed to be in a rock band? You’re not gonna tell Biggie Smalls that he’s a fat fuck, are you, you lameass motherfucker? But you’re gonna make fun of me because I’m a chunky guy? I just wanna get into a fist-fight with these people. I feel like I’m back in junior high school, and people are making fun of the fat kid. I’m a middle-aged man, and I’m an artist, I make fucking goddamn art. I’m contributing, for better or worse, to higher culture. I tour around the fucking planet. There are people who pay me thousands and thousands of dollars, even at the lowest point of my career, to come and bring art to their town. And you guys are lampooning me because I don’t look like some fucking heroin addict? Fuck you! No!”

The Pixies have loomed so large over Thompson’s wilderness years that those around him dared not even say the band’s name until recently. But others have not been so bashful. Nirvana, Radiohead and PJ Harvey are among those who have freely admitted to cribbing the core of their sound from the Pixies, a chain reaction without which rock’s last decade would be unimaginable. The band may have sounded like no-one else in their five short years of making records, with their soft verses of bone-crunching incest and outer-space dreams and unholy, shrieking choruses. But their reunion shows have been places of reverence, as if whole generations want to make up for lost time; as if, rather than humble prophets lighting the way for Cobain, the Pixies were rock’s real messiahs all along.

It’s a story that Kim Deal, always the band’s most unrestrained voice, has been dissuaded from telling Uncut. But Thompson, Joey Santiago and many others from their glory days speak long and freely, clearly still in love with the band that changed all their lives. It is one of rock’s strangest tales, fuelled by repression and denial as much as riotous abandon. As Jeff Craft, the Pixies’ agent to this day, warns Uncut, they were always a band with secrets.

“There is another world that’s underneath everything,” he warns. “On the face of it, they all appear to be very polite, ordinary people. And then you listen to what they do. You can’t make music like that and be as they appear to be. That means that there is always something below the surface. But if they allowed it to come out, then they couldn’t possibly exist. They avoid confrontation all the time. Just in case the confrontation tapped into that thing beneath. They are all strange characters. None of them are normal. They’ve all got their own personal anxieties, but they all have to keep the lid on them. The Pixies are like a volcano, with a tough crust over it. But it could go off any day.”