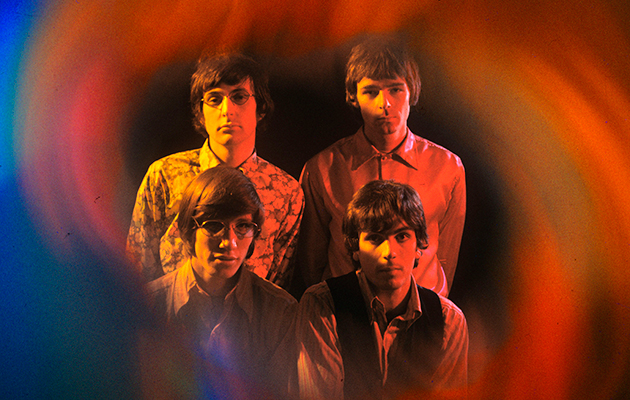 With the release on March 24 of Pink Floyd The Early Years, 1965 – 1972: The Individual Volumes and the opening of the The Pink Floyd Exhibition: Their Mortal Remains exhibition at the V&A on May 13, we dig deep into the group’s archives, as band members, collaborators and associates lead us from Spalding’s Tulip Bulb Auction Hall to the sound stages of American TV shows. Along the way, Tom Pinnock explores the mercurial brilliance of Syd Barrett and the band’s fitful attempts to take their experimental creative impulses into the mainstream. “We didn’t recognise what was going on,” says Nick Mason. “We were all so focused on wanting the band to be a success.” Originally published in Uncut’s December 2016 issue (Take 235). Words: Tom Pinnock

“It makes me shudder,” says Nick Mason, remembering Pink Floyd’s first American tour, in November 1967. “Because Syd was by then a loose cannon.” The drummer is recalling the tinpot chat shows that Pink Floyd appeared on at the end of that year, from Pat Boone In Hollywood to American Bandstand, presented by Dick Clark. “No-one knew what Syd was gonna say, or whether he was going to freak out and try and throttle the host. It was so uncomfortable. Probably the only person who didn’t notice was Dick.”

On November 8, the day after American Bandstand, the group headed to the Hollywood studio of KHJ’s Boss City, where a clearly fed-up Syd Barrett walked out. “It came time for the take and Syd had disappeared,” says Andrew King, Floyd’s co-manager until Barrett’s departure. “So I went up to the director, who was classic Hollywood, and said, ‘Our lead singer isn’t here.’ And he said, ‘OK. He’ll be back in a few minutes, will he?’ It was so beyond this guy’s comprehension that something like this could happen that he practically passed out in shock. You don’t walk out of prime-time TV shows. It’s unheard of. But Syd did. I just think he thought it was boring and he couldn’t be bothered.”

The American tour was the end of a difficult six months for the Floyd, a period that had seen the group rise from the underground and then begin to fracture in the spotlight. Some stories from these latter days of the Barrett-era Floyd have been told many times: Syd onstage, lost in his own mind, detuning his guitars until the strings fell off, with Roger Waters, Rick Wright and Mason terrified about what he might do next; the singer appearing to melt under the hot stage lights as a whole tub of Brylcreem cascaded down his face.

Almost 50 years after these events, however, Pink Floyd’s long-awaited boxset, The Early Years 1965-1972, finally sheds new light on the band’s first year in the spotlight and the sublime talent and disturbing decline of Syd Barrett. Full footage of the band’s American Bandstand performance of “Apples And Oranges”, and their subsequent awkward interview with Clark, is just one restored jewel contained in The Early Years, alongside perhaps the three greatest lost Floyd songs, “Vegetable Man”, “Scream Thy Last Scream” and “In The Beechwoods”, never officially released before, or heard in this crystal-clear quality.

“This boxset is a complete sea change, really,” Nick Mason says, recalling the years he’s spent assembling the 27-disc collection, “from the days when we were very careful about what we would release – we’d only put out the very final version of everything – to actually digging about to find old things.”

Although Barrett’s time with the band only takes up two and a half discs, these are the jewels in the crown of this set, peeling back the liquid layers of this most mythical and mysterious period of the Floyd’s history; a crucial time when the group, teetering on the edge of creative and financial ruin, were split between high art and low commerce, between London’s UFO club and Spalding’s Tulip Bulb Auction Hall, between ambition and exploration, and between Top Of The Pops and spifritual enlightenment. Hits were searched for, and minds were damaged, though the truth about why is more complex than it has previously appeared.

“I’m absolutely happy with people who say, ‘For me, Pink Floyd was really Syd Barrett. After that, it went downhill,’” says Nick Mason, pinpointing “Vegetable Man” and “Scream Thy Last Scream” as his favourite bits of the boxset. “I get it. That’s not what I feel, but I don’t take umbrage with it. No-one else has written a song quite like ‘Chapter 24’, or ‘Bike’, or ‘Jugband Blues’.”

“Syd was a very sensitive soul, and a very dedicated artist in his own way,” says Aubrey Powell, friend of the group and Hipgnosis co-founder. “He was a monumental talent, but far more sensitive than people took him for. The toughness that is required to survive in that world of rock’n’roll, his sensitivity just couldn’t cope with it. It pushed him into a corner, mentally, that he couldn’t get out of.”