Paul Simon on “The Sound Of Silence”, Art Garfunkel and Graceland: “The music keeps growing”

An interview from the Uncut archive

Following the recent news that Paul Simon is to give a “farewell performance” in Hyde Park later this summer, it seemed an appropriate moment to post my interview with Simon from the July 2016 issue of Uncut. Incidentally, you can find more about Simon’s Hyde Park concert by clicking here. 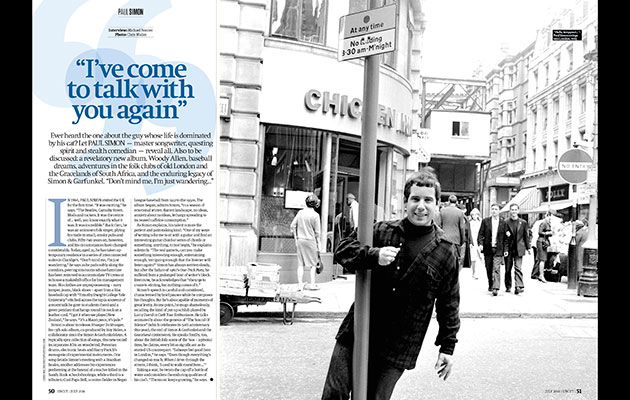 In 1964, Paul Simon visited the UK for the first time. “It was very exciting,” he says. “The Beatles, Carnaby Street. Mods and rockers. It was the centre of… well, you know exactly what it was. It was incredible.” Back then, he was an unknown folk singer, plying his trade in small, smoky pubs and clubs. 52 years later, however, and Simon’s circumstances have changed considerably. Today, aged 74, he has taken up temporary residence in a series of interconnected suites in Claridges.

“Don’t mind me, I’m just wandering,” he says as he pads softly along the corridors, peering into rooms whose furniture has been removed to accommodate visiting TV crews or to house a makeshift office for his management team. His clothes are unprepossessing – a navy jumper, jeans, black shoes – apart from a lilac baseball cap with “Timothy Dwight College Yale University” stitched across the top (a souvenir of a recent talk he gave to students there) and a green pendant that hangs round his neck on a leather cord. “I got it when we played in New Zealand,” he says. “It’s a Maori piece, it’s jade.”

Simon is about to release Stranger To Stranger, his 13th solo album, co-produced by Roy Halee, a collaborator since the Simon & Garfunkel days. A typically spry collection of songs, this new record incorporates African woodwind, Peruvian drums, electronic beats and Harry Partch’s fabulous menagerie of experimental instruments. One song details Simon’s meeting with a Brazilian healer, another addresses his experiences performing at the funeral of a teacher killed in the Sandy Hook school shootings, while a third is a tribute to Cool Papa Bell, a centre-fielder in the Negro League baseball from 1922 to 1950s. The album began, admits Simon, “in a season of emotional winter. Barren landscape, no ideas, anxiety about no ideas, lethargy spreading to increased caffeine consumption.”

As Simon explains, his talent is more the patient and painstaking kind. “One of my ways of writing is for me to sit with a guitar and find an interesting guitar chord or series of chords or something, anything, to just begin,” he explains solemnly. “The real game is, can you make something that’s interesting enough, entertaining enough, intriguing enough that the listener will listen again?” Simon has always written slowly, but after the failure of 1980’s One Trick Pony, he suffered from a prolonged bout of writer’s block. Even now, he acknowledges that “the urge to create is stirring, but nothing comes of it.”

Simon’s speech is careful and considered, characterised by brief pauses while he composes his thoughts. But he’s also capable of moments of great levity. At one point, he mugs shamelessly, recalling the kind of put-up schlub played by Larry David in Curb Your Enthusiasm. He talks animatedly about the genesis of “The Sound Of Silence” (which celebrates its 50th anniversary this year), the end of Simon & Garfunkel and the Graceland controversy. He speaks fondly, too, about the British folk scene of the 1960s – a pivotal time, he claims, every bit as significant as its storied American counterpart. “I always feel good here in London,” he says. “Even though everything’s changed so much. When I drive through the streets, I think, ‘I used to walk round here…’”

Taking a seat, he twists the cap off a bottle of water and considers the enduring qualities of his craft. “The music keeps growing,” he says.