Getting it together in the suburbs seems to be a peculiarly middle class rite of passage – the moment when city living is no longer tenable and a migration in pursuit of wider spaces, cleaner living and better schools is required. Such considerations are behind the decision taken by Nathaniel and Julia Noailles, who with their young, Aspergersy son Copley exchange their life in Boston for a more spacious existence in Dolores Woods, a large development on the outskirts of an un-named Midwestern city, in Patrick Flanery’s tremendous new novel, Fallen Land. 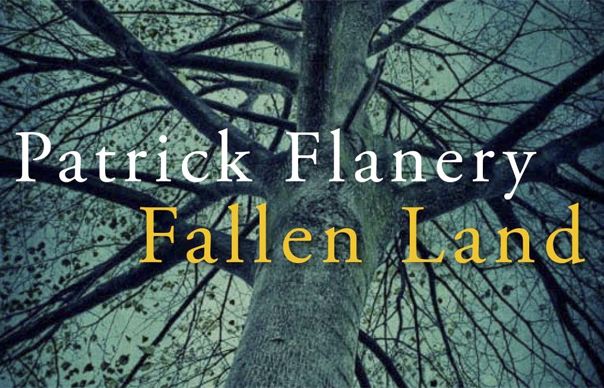 Getting it together in the suburbs seems to be a peculiarly middle class rite of passage – the moment when city living is no longer tenable and a migration in pursuit of wider spaces, cleaner living and better schools is required. Such considerations are behind the decision taken by Nathaniel and Julia Noailles, who with their young, Aspergersy son Copley exchange their life in Boston for a more spacious existence in Dolores Woods, a large development on the outskirts of an un-named Midwestern city, in Patrick Flanery’s tremendous new novel, Fallen Land.

Fallen Land refers explicitly to the history Dolores Woods itself, but is also more broadly a comment on contemporary America itself. Flanery has in his sights the failure of the American Dream and the gradual privatisation of the entire country, whereby the state has “ceded all responsibility to civic life and public wellbeing to private corporations” like the one Nathaniel himself works for: a “provider of solutions for all sectors of society including corporate, domestic, government, and parastatal security architecture – facilities to meet all protection needs”. Nathaniel and his family have recently bought the flagship property on the Dolores Woods scheme – “pastiches of Victorian architecture, just out of scale” – and Flanery follows the history of the house and the land on which it was built.

Nathaniel shares narrative duties with two other characters. There is his neighbour, Louise Washington, a retired black school teacher who knows that the Noailles house is built on the site of a filled-in sinkhole that conceals the corpses of the local mayor and Louise’s grandfather, who were lynched together in 1919. And then there is Paul Krovik, an ambitious property developer who bought the land from Louise and watched his dream for “two hundred ‘luxury executive homes’, each located on a three-quarter acre plot” unravel, first due to subsidence and latterly the financial crisis, leaving only 21 completed properties surrounded by “empty spaces lapsing back into wildness, an assortment of abandoned archaeological excavations gaping between the finished houses, scattered widely around half a dozen streets.” Abandoned by his family, Paul now lives covertly in a secret fallout shelter built beneath what was once his own home, “the jewel in the crown of Dolores Woods” – the house bought by the Noailles.

Flanery’s principals are all haunted. Louise, who knows the history of every nook and cranny of what was once Poplar Farm is burdened by the guilt that she has sold her family’s land and watched as Krovik has reshaped it beyond all recognition into Dolores Woods. Nathaniel has to contend with the memories of an abusive father alongside his nagging concerns that this move from Boston hasn’t been as successful as it might have. Krovik, meanwhile, is gradually unravelling in his state-of-the-art bunker, where his mind swirls with the teachings of the shifty “great man”, which Krovik’s overbearing father drilled into him as a child: “Society is nothing but a conspiracy against you. If the country is at war, then the average citizen has to look out for his own even more than in peacetime, government be damned.” In Paul Krovik’s mind, “it is essential to plan not just for attack by foreign terrorists or governments, but also for the possibility of hostile fellow Americans, for a new civil war, or for an environmental, technological, or biochemical conclusion to the human era on this planet.” Krovik has taken to stealing at night into his old house, moving the furniture around and covering the walls with graffiti, for which the Noailles at first suspect Copley is responsible. No good can come of this.

For Flanery, Krovik’s paranoia is a condition particular to contemporary America. On one hand, there is Nathaniel’s employer, the many-tentacled EKK corporation, who’re intent on turning the country’s prison population into “the largest body of slave labor since the emancipation”; on the other, there is Copley’s school with its classroom surveillance feeds, fingerprint scanners and guards who carry tasers to subdue disruptive pupils. In places, the book vaults into high-end dystopian satire, and you might think a little of Don DeLillo in Flanery’s depiction of suburban anxiety. But there is also something poignant about Flanery’s three protagonists. All of them have worked for what they believed to be a better America, and all of them have watched their dreams fail. For an epigraph, Flanery quotes Nathaniel Hawthorne’s The House Of The Seven Gables: “In this republican country, amid the fluctuating waves of our social life, someone is always at the drowning-point.” In Fallen Land, it seems as if an entire country has reached the drowning-point.

Fallen Land by Patrick Flanery is published by Atlantic Books