“One way to make a duck salute!” An enigma returns…

I received an email last week from an old college friend, with a link to the Souncloud page of Liam Hayes & Plush, and an amused/irate message along the lines of, "One of your two jobs in life was meant to be to flag me when he releases anything/makes any move out of his lair." 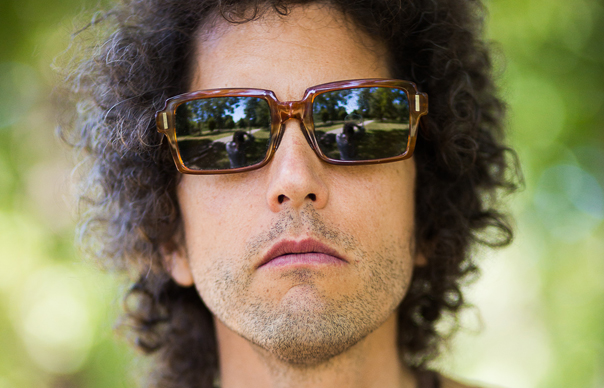 I received an email last week from an old college friend, with a link to the Souncloud page of Liam Hayes & Plush, and an amused/irate message along the lines of, “One of your two jobs in life was meant to be to flag me when he releases anything/makes any move out of his lair.”

There have been times, actually, when it’s felt that I’ve been the only person writing about this sometimes brilliant and just as frequently elusive Chicago musician. Twenty years ago, Plush put out a debut single on Domino and Drag City called “Three Quarters Blind Eyes”. It was pretty fine, a little like Big Star at their most distrait, but the b-side was something else entirely: a song called “Found A Little Baby” that marooned Hayes in a heady orchestral swirl, sounding for all the world like Dennis Wilson. I made it Single Of The Week in NME, and it still remains one of my favourite songs.

At this point Hayes, who had previously guested on a couple of Will Oldham and Royal Trux records, became something of an obsession, a state of affairs amplified by him revealed as a kind of obscure perfectionist, and not exactly one to immediately capitalise on a bit of low-level music press hype (two decades on, this seems to be still the case). Stories of an extravagant album circulated, but nothing turned up until 1998, when that long-awaited longplayer, “More You Becomes You”, turned out to be a bunch of candlelit piano ballads. If you’ve ever seen the movie version of Nick Hornby’s High Fidelity, you can spot Hayes playing one of those songs in the background of a scene (that film’s scriptwriter, DV DeVincentis, turned up at a Plush show at Highbury Garage while he was researching the book’s original setting of Holloway Road, as I dimly recall). Later, I ended up interviewing Hayes in a Putney park, where he spent at least ten minutes failing to tell me his age. It didn’t turn out to be one of my more incisive pieces.

Anyway, Hayes’ career has proceeded in this kind of obtuse, stop-start way ever since, a great yarn from the rock underground, rendered more poignant and strange by the ambitious vision that underpinned much of his music. Sometime in 2002, I convinced Uncut’s then-Reviews Ed to let me write a lead review of a CD I’d just bought online from a record label in Japan. According to the press release which accompanied the belated UK release for the same album in 2008, I wrote that Plush’s “Fed” was “The dazzling masterpiece he [Hayes, Plush’s sole constant member] always threatened to produce.” Evidently not enough of a “dazzling masterpiece” for it to merit a UK release for six whole years.

“Fed” had cost Hayes so much to make, it transpired, only a Japanese label, After Hours, could afford to initially release it (Drag City ended up putting out the stripped-back, substantially cheaper – I assume – demos as “Underfed”). Its expansive vision had taken years to realise, and involved Earth Wind & Fire’s horn arranger, amongst other deluxe personnel. At the time, I mentioned Burt Bacharach and Jimmy Webb, perhaps his early ‘70s records like “Land’s End” with those looming, portentous orchestrations, as well as some of the ambitious soul of that same period. “Having It All”, for instance, began as a diffident cousin of Marvin Gaye’s “Save The Children” – though Hayes was far too awkward a singer and songwriter to pass himself off as a conventional soulman.

The story continues in that vein. “Bright Penny” came out on the same tiny British label, Broken Horse, in 2009, and somehow managed to feature the same horn arranger, Tom Tom MMLXXXIV, Morris Jennings (Curtis Mayfield’s old drummer), Bernard Reed (Jackie Wilson’s bassist), Brian Wilson’s rhythm section, John Stirratt and Pat Sansone from Wilco and so on. Often, it was easy to imagine you were listening to some overlooked artefact from the ‘70s, some collection of flamboyant gestures corralled into an album: “White Telescope” dangled precariously between sounding like a great lost Boyce & Hart song, and resembling something from some sub-Godspell children’s musical.

Despite some killer fragile ballads (“I Sing Silence”, and its airy nod to the Bee Gees’ “How Deep Is Your Love?”; or the ravishing “The Goose Is Out”, when Hayes urges, “Let’s watch the stars in my auditorium”), it was a much more upbeat, celebratory record than Hayes had made before, perhaps because it often seemed engaged with what he’d managed to do, against the odds. The unfeasibly perky “So Much Music”, especially, emerged as a kind of defiant manifesto, noting how music “almost drove me crazy” before Hayes asserted, “No I’m never gonna give up”, then hired a host of backing singers to ram the point home.

Last year, a clutch of Plush songs, old and new, turned up on the soundtrack album to a Roman Coppola movie, A Glimpse Inside The Mind Of Charles Swan III, alongside the movie’s star, Charlie Sheen, singing Jobim’s “Aguas De Marco”. A new Plush album was pronounced imminent; it even had a title, “Korp Sole Roller”, and some of the songs earmarked for it – notably the Lennonish “Cried A Thousand Times” – sounded excellent, if not exactly zeitgeist-embracing commercial breakthroughs. (he did get interviewed by The New Statesman, mind…)

It is “Korp Sole Roller” that has now arrived, somewhat stealthily, on Bandcamp, a state of affairs that makes it look as if Hayes’ career remains on an inadvertently hapless trajectory, however strong these sweet, occasionally slightly glammy songs might be (“Glimpse” has been described by one of my colleagues, Junkshop Glam Man, as sounding a little like Pilot). The sound is more streamlined, less ornate, and produced by Pat Sansone, though still possessing that slightly sun-warped take on classic pop, that odd trick of performing upbeat songs in an enigmatically mournful way. I’ve often spoken of Hayes as Bacharach to Will Oldham’s Dylan, and that comparison remains pertinent on this generally lovely record. But playing it again today, “Cried A Thousand Times” even sounds like the closest he’s come to the epiphanies of “Found A Little Baby”; have a listen…

There does appear to be some further good news. In spite of the impression given by “Korp Sole Roller”‘s release, Hayes appears to be moving towards a relatively unprecedented level of prominence, thanks to a new deal with the Fat Possum label. Another new album, “Slurrup”, is being promised for January and, though Plush tasters have proved frankly premature in the past, there’s a new song to take in. It’s called “One Way Out”, and it kind of rocks, excellently: “One way to make a duck salute!”

Again, let me know what you think. I reckon it might be a bit premature to start plugging Hayes as an unexpected star of 2015, but nevertheless, it’d be great if a few more people got to hear him: one of the most charismatic and eccentric cult pop craftsmen of the past 20 years, you could say.