On Michael Head’s “Artorius Revisited”, and beyond…

Sometime last autumn, maybe, an EP called “Artorius Revisited” by Michael Head & The Red Elastic Band was quietly released in limited quantities. Last time he surfaced around 2006/2007, in a quixotic, thwarted and mostly transcendent musical career that now stretches back some three decades, Head and his longest-lasting configuration, Shack, were signed to Noel Gallagher’s Sour Mash label. It didn’t last. 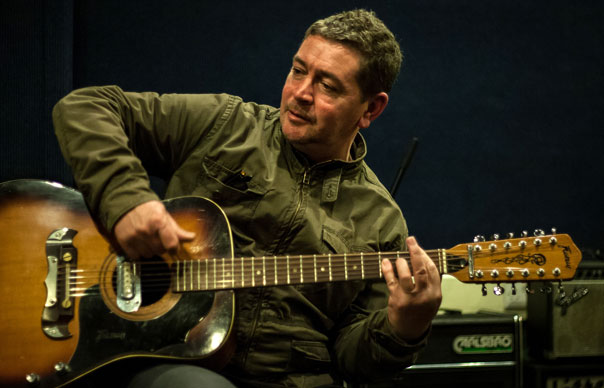 Sometime last autumn, maybe, an EP called “Artorius Revisited” by Michael Head & The Red Elastic Band was quietly released in limited quantities. Last time he surfaced around 2006/2007, in a quixotic, thwarted and mostly transcendent musical career that now stretches back some three decades, Head and his longest-lasting configuration, Shack, were signed to Noel Gallagher’s Sour Mash label. It didn’t last.

Time and again, Head has been rediscovered, revered, acclaimed by Gallagher and sundry others as a secret architect of Britpop, found himself on a particularly weird NME cover without his name but with the headline, “This Man Is Our Greatest Songwriter: Recognise Him?” (I should admit a degree of culpability there), and repeatedly faded back into obscurity; stardom unobtained, legend enhanced.

“Artorius Revisited” – now sold out on vinyl and CD, but newly available on iTunes – is largely unburdened by that sort of fuss. It finds Head working without his longest-suffering foil, his brother John, but not much else has changed over the years. In a 1997 review of his “Magical World Of The Strands” masterpiece, I wrote, “Head’s gift is to invest simple acoustic reveries with a depth and melodic resonance that so many rock artisans claim as their own and so few genuinely possess. Here, he draws on similar influences to, say, Belle & Sebastian – Nick Drake, Simon & Garfunkel, his abiding guru, Arthur Lee – but with radically different results. If the admittedly beguiling B&S are studiedly ingenuous, The Strands make bruised, ruefully reflective music.”

That, more or less, still holds true. In fact, theLove/Lee fixation – signposted here, I think, by the allusion to the sacred “Artorius” in the title – might be stronger than ever. One of The Red Elastic Band is Andy Diagram, who figured in Head’s first doomed stab at pop stardom, The Pale Fountains, in the earlyish 1980s. His trumpet here, especially on the terrific title track, provides a blaringly unapologetic reference to “Forever Changes”. Head has always been candid about his heroes, and his unpretentious desire to make music that fits into that romantic continuum.

The thing with Head, though, is that his own idiosyncratic voice and melodic gifts shine through even his most blatant homages. “Lucinda Byre”, on the EP, sees him take Lee’s trick of delivering his lyrics in gushing clusters, as if his thoughts are constantly racing ahead of the song, stretching its pace. But he does it in that gentle Liverpudlian burr, which makes it sound like the song – an amiable navigation around his hometown’s demi-monde – is built out of snatched conversations, at once down-to-earth and mystical.

“The song starts in a café having some acid,” Head told Uncut’s John Robinson in a piece that ran in our end-of-year Morrissey issue, “and it’s about getting to the end of Bold Street – if you can. Even if you’re not tripping, there’s no way you can get to the end of it without bumping into people you’ve not seen for 10 years or whatever…”

There’s a lot in that quote that might hint at why Head slopes back into the spotlight so erratically: the ‘Live Shows’ section of www.michaelhead.net looks pretty busy until you notice it’s not a list of forthcoming shows, but a record of the sporadic gigs he’s played over the last five years. For all those waves of hype he’s endured (the NME cover was around “HMS Fable” in 1999, a fine collection of songs that were undermined by bombastic Noelrock productions and unrealistic label expectations), Head has not materially altered the quicksilver, febrile nature of his songwriting, or his attitude to his art. “I got some lovely Thai bush from a friend,” he told Uncut. “I went to bed that night and in the morning I had five songs with lyrics that I wouldn’t have written myself… I was never in it for the dough. What me and our J [John Head] do is make songs.”

“Artorius Revisited” is as good an introduction to Head’s world as any, though it has a sneaky false start: “PJ”, a burst of tinny techno that seems to be coming out of a phone speaker no matter what stereo system it’s played on, which is abruptly interrupted by the loud and rich cello opening to “Cadiz”. There are four fully-realised songs and two short instrumental bookends, all full of great moments: the way the title track switches back and forth between folkish reveries and staccato voluntaries, which eventually resolves itself into swashbuckling, border-country psych; “Newby Street”, whose sprightly charm recalls the Bacharach aspirations of Head in The Pale Fountains more closely than on any of his subsequent Shack records (“Always Something There To Remind Me” is possibly the closest analogue); and best of all, the call to “Come on!” just before the cello coda of “Lucinda Byre”.

It occurs to me, though, that some of the Britpop-era grandstanding around Head and Shack might have been offputting to some of you, so I’ve compiled a few clips that might provide a gateway to this amazing songwriter. Before I roll, though, a swift plug for the new issue of Uncut that’s lurking in UK shops now: new interviews with Ray and Dave Davies, David Crosby, Smokey Robinson, Robert Wyatt, Mogwai, Davy O’List, Jason Isbell and John Sinclair, plus a big preview of plenty of 2014 albums not mentioned here, and an authoritative Richard Williams review of the new Springsteen album that comes with a lengthy Q&A with the key collaborator on “High Hopes”, Tom Morello. Full details here.