Notes From The Great Escape Festival

Things aren’t due to kick off for a couple of hours at the Pavilion Theatre where throughout this year’s Great Escape Festival Uncut is hosting a splendid line-up. So early Thursday evening I’m at the Dome, where Australian psyche rockers POND are making enough noise to wake the long-time dead. 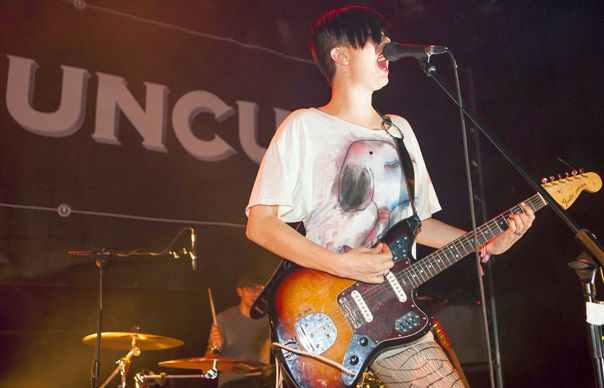 Things aren’t due to kick off for a couple of hours at the Pavilion Theatre where throughout this year’s Great Escape Festival Uncut is hosting a splendid line-up. So early Thursday evening I’m at the Dome, where Australian psyche rockers POND are making enough noise to wake the long-time dead.

The racket they’re making is variously reminiscent of Zeppelin and Hendrix, with hints of early Pink Floyd and lashings towards the end of their brief set of the MC5, their two guitarists on their knees in front of their amplifiers like Wayne Kramer and Fred ‘Sonic’ Smith, the Dome now drenched in howling feedback, charismatic singer Nick Allbrook a bizarre mix of Simon Amstell and Iggy Pop. It’s a terrific start to three days of mostly great music.

Back at the Pavilion Theatre, meanwhile, tonight’s bill has attracted quite a crowd, the place packed when I get there and a long queue outside, which is pretty much the story on Friday and Saturday as well. Admirably hairy Canadians THE SHEEPDOGS are first on. The hirsute five-piece is clearly in thrall to early-70s Southern rock – not so much the Muscle Shoals sound of Alabama Shakes as The Allman Brothers, post-Duane, when Dickie Betts was ascendant and his trilling guitar lines were their musical signature.

They go down an absolute storm, as does WILLY MASON, looking extremely dapper in a black suit and neatly-trimmed hair. TOY have been much-written about recently, due to two excellent singles, “Left Myself Behind” and “Motoring”, highlights of their set, which put them in a place where The Velvet Underground of “What Goes On” meet a particularly mesmerising revisiting of vintage krautrock.

When it works, this is exciting stuff – relentless guitar riffs underpinned by pounding motorik beats. When the band sounds slightly more lumpy than sleek, however, you may end up thinking this isn’t so much the much-vaunted Velvets-Kraftwerk interface you’ve read about than Gay Dad-meets-Status Quo.

Last up tonight are DJANGO DJANGO, who are in the process of bringing down the house when with a very loud band their sampler blows up, bringing things to a temporary halt. They recover quickly enough, though, and the crowd by the end of their set is in euphoric mood.

Friday morning, I wander over to somewhere called The Warren where new Sub Pop signings HUSKY are playing an early show to a crowd who seem initially rather bleary but are soon stirred to life by an excellent selection of songs from the Australian band’s new album, Forever So, stand-out among them “Fake Moustache” and “History’s Door”. Comparisons with Fleet Foxes are a little exaggerated, but probably a useful reference point.

Saturday afternoon and at the Pavilion Theatre, Richard King is in conversation with Guardian music critic Alexis Petridis about his book How Soon Is Now, a colourful history of British indie music, which allows him to entertainingly recycle some amusing anecdotes. A few hours later, young Canadian band SLOW DOWN, MOLASSES blow more than a few minds with a brief but often spectacular set in a small room at the Prince Albert pub. There’s a more than passing musical resemblance to The War On Drugs in what they play, which several times also makes you think this is the kind of sound Toy might be after, achieved with half the grooming and a lot less hair flicking.

A quick cab ride and I’m back at the Pavilion for tonight’s Club Uncut opening act, the rather fabulous BLACK BELLES, a trio from Nashville signed to Jack White’s Third Man Records, whose garage punk voodoo blues twang makes them a lot of new friends. Tonight’s other acts are BLANCK MASS, whose 45 minute set occupies a somewhat unchanging musical landscape made up principally of lengthily sustained chords, something that may have sounded rather more daring 50 years ago when La Monte Young first essayed such experiments in drone and subliminal repetition. The crowd, or what’s left of them, at least, is a bit subdued by the end of it all, but perk up a little for closing act FOREST SWORDS.

Saturday provides nothing but highlights at the Pavilion, starting with a show-stopping performance by Uncut favourite HANS CHEW, whose brilliant shaggy dog song-stories are accompanied by only his own rollicking bar-room piano and electric guitar. Electronic duo SOLAR BEARS continue the evening’s upbeat mood, which BETH JEANS HOUGHTON & THE HOOVES OF DESTINY capitalise on with a wonderfully rousing set of largely joyous songs from debut album, Yours Truly, Cellophane Nose, including a stunning “Dodecahedron”, as featured on Uncut’s Watch That Man CD.

Erika M Anderson, better known as EMA [pictured above] makes a quite stunning opening, dressed in an orange anorak with the hood pulled up and covering her face, which makes her look eerily like Kenny from South Park. Her first number is a stark thing called “Fargo”, a recitation reminiscent of Ani De Franco’s setting of Travis Bickle’s “some day a rain will come and wash the blood from the streets” monologue from Taxi Driver. It’s powerful, eerie stuff, as is most of what follows, largely drawn from last year’s Past Life Martyred Saints, all of it pretty fantastic.

For more on The Great Escape, visit uncut.co.uk or see next month’s Uncut.

All the best for now and have a good week.