Nick Lowe: “I wanted to be in music for the long haul”

Jesus Of Cool talks Johnny Cash, The Beatles and his time as a bona fide pop star 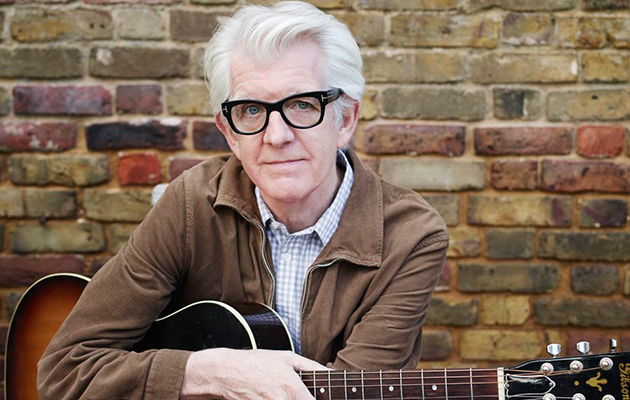 Making tea in the kitchen of his downtown Brentford pad, Nick Lowe ponders the theory that The Beatles ruined pop music. “Because after them, everyone thought they should write their own material – which of course most couldn’t,” he says. “And it also ended the era of great session musicians, people who were fantastic instrumentalists playing very simply.”

Nick draws no conclusions, but part of him, one senses, belongs in pop’s Tin Pan Alley era; the versatile studio professional, the agile tunesmith, the crafty lyricist. Only part of him, however, for over the course of a career that started in his teens, Lowe has worn many guises; the post-hippy idealist of “(What’s So Funny ’Bout) Peace, Love And Understanding”; hard-drinking pub rocker with Brinsley Schwartz; retro-stylist with Rockpile, madcap in-house producer for Stiff Records; unlikely pop star; aspiring country crooner and, finally, the sophisticated middle-aged romantic he unveiled on 1994’s The Impossible Bird, a role he has continued to inhabit on disc, though these days he’s a happily married father marveling at his eight-year-old son’s drumming skills.

As pop careers go it’s a one-off, not least for the way it blurred the line between artist and producer in the late 1970s, when Lowe was a pivotal figure in the punk and new wave insurrection. Among his first productions was Graham Parker & The Rumour’s 1976 landmark debut, Howlin’ Wind. He later produced the first punk single, The Damned’s “New Rose” for Stiff, and even more tellingly produced Elvis Costello’s first five albums. His touch remained sure for other acts on Stiff and beyond (The Pretenders “Stop Your Sobbin’”, for example) while his own output married acrylic-bright melodies with deadpan wit.

Lowe’s focus drifted in the ’80s. He abandoned production – “I hated the sound the machinery made” – while his own music became erratic and, at times, insipid. Since re-inventing his approach with The Impossible Bird, the albums have flowed steadily, accruing into an understated but brilliant canon of songs that flit easily across styles while remaining rooted in Lowe’s genial, sensitive character: Brill Building pop for grown-ups. In his homeland he’s something of a connoisseur’s choice, a music lover’s national treasure, but in the US he has a wider public that crosses generations.

We are at Lowe’s muso retreat, a short stride from the family home, to talk about his new record, Quality Street, his Christmas album, though Uncut uses the occasion for a flick through Lowe’s back pages. The décor is arty and modernist, though a vintage Johnny Cash LP is on prominent display, a nod to his friend and hero. As ever, Nick is dapperly dressed in grey flannels, white shirt and basket-weave loafers beneath a well-coiffed shock of birch-silver hair and a chunky pair of horn rims. He’s in good shape. His conversation is fluent and articulate, accompanied by a semaphore of hand signals, his enormous, bass player’s palms sometimes splayed skyward to make a point, but more often strumming acoustic air guitar, no doubt one of estimable vintage, rather like its owner.