Neil Young: “He was just moving so far ahead”

Photographer, guitar tech, archivist... Joel Bernstein on touring with Neil, rehearsing with Dylan and the story behind that infamous bootleg 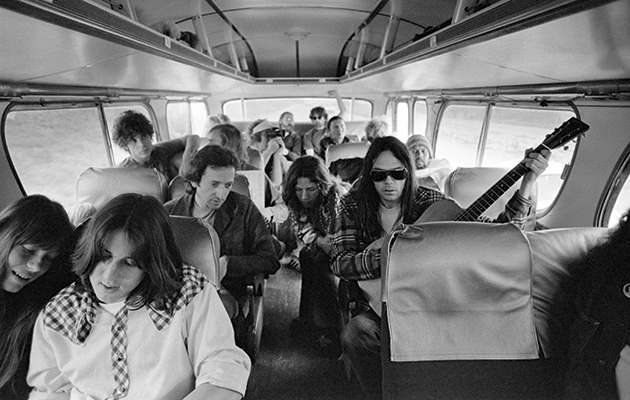 You’ll have hopefully noticed that the latest issue of Uncut is now on sale, which Jack White heading up our extensive Review Of The Year. Snuck inside, in the albums pages, is my review of Neil Young‘s latest archival release, Songs For Judy – based around a live recording made by Joel Bernstein, the photographer turned guitar tech and archivist. Joel was kind enough to help us out with some beautiful artefacts – including a scan of his original cassette case and 1976 tour itinerary.

I spoke to Joel for a Q&A to run with the review, which I thought I’d post here while we wait for Neil’s Archives subscription service to finally open for business…

How did you first meet Neil?
Joni Mitchell asked me to be her photographer when I was 16. She invited me to her first concert at Carnegie Hall in February 1969, where I met David Crosby and Graham Nash. The next weekend, I met Laura Nyro when she was writing New York Tendaberry at David Geffen’s apartment. The weekend after that, Elliot Roberts asked me to photograph Neil and Crazy Horse playing at the Bitter End. It was a very heady month!

What were your first impressions of Neil?
He was a very intense guy, very focused… I was very impressed that he could play so well on electric and acoustic. That was the first 20-minute “Down By The River” I heard. I next saw Neil at the Electric Factory in Philadelphia. That’s when I took the gatefold picture for the inside of After The Gold Rush.

How did you come to be on the ’76 tour?
I’d tuned his Martin D guitar at the Electric Factory. Three years later, I was photographer on the Time Fades Away tour and he asked me tune his guitars one night – and I tuned them for him before each show. After that, I became Bob Dylan’s guitar tech on the second Rolling Thunder Revue in spring ’76 and then guitar tech for Crosby and Nash through Europe  in August and September. I joined Neil in November.

What impressed you most about his performances on this tour?
Having seen several of the solo shows in 1971 and been on my first long tour with Time Fades Away, I was very attuned to Neil’s songwriting. To me, Zuma was a fantastic advance; he was just moving so far ahead. I thought his focus in his solo sets, too, was incredible.

Can you tell us about the tapes  you made?
On Time Fades Away, I remember thinking, ‘God, wouldn’t it just be great to have even just a PA mix as a souvenir!’ I was friends with Bob Sterne, Neil’s sound mixer, and Tim Mulligan, his PA mixer, so I asked if I could record the shows. Here’s some quick context. On the European and Japanese tour earlier that year, Neil had made multi-track recordings of Crazy Horse both in London at Hammersmith Odeon and in Tokyo at the Budokan. I believe the Odeon-Budokan album was finished and a release was planned. So a mono PA cassette is nothing to do with nothing. Neil’s already officially done what he set out to do on the tour. Tim Mulligan was recording the tapes as well, which would have been far superior to mine. There were multi-tracks from the shows in New York, Boston and Atlanta. I made a C90 and a C60; the acoustic set on one and the electric set on the other. I recorded 16 shows on a Uher CR 134 portable recorder; so 32 cassettes.

How did the Judy Garland rap came about?
On the last night of the tour, there were two benefit concerts for the Fox Theatre in Atlanta. I think it was 9pm and 12pm. Neil and the band had imbibed and were on a particular plane, so the midnight show started around 1am in the end. It was an extremely rambling affair; I don’t think any of the Tonight’s The Night shows I saw were as drunken as this one. This is where the Judy Garland rap comes in. It was so special to me, it was so out there, that I put it on that tape.

What happened at the end of the tour?
I got word that Neil was going to play at the last concert for The Band at Winterland and could I do guitars for him and for Bob and Joni. I set up rehearsal for Bob and The Band at their hotel through the afternoon, which was stunning. I was the only person who got to hear it until Neil came in, hours and hours later. I can remember them playing “Forever Young” and Neil sitting in the corner, punching the air on the word “Young”. “Forever YOUNG!”

So what happened to the tapes?
After Winterland, I started editing the cassettes. Cameron [Crowe] and I spent close to a week finalising the sequence, just what felt right. I made four copies – Neil had one, Cameron had one and two went to the crew members who got me the PA feed in the first place. Five or six years later, one of them lost or had their tape stolen. Bad copies of copies of that tape started circulating first as a vinyl bootleg called Days Of Gold And Roses and then on CD. I was interviewed in the ’80s by the Broken Arrow fanzine, who wanted to know about the cassette – I told them and it became known as The Joel Bernstein Tape.

When did you first discuss giving an official release to the tape?
When I was still Neil’s archivist, he asked me in the early 2000s to make a list of possible live albums that had not been released. It was a specific-to-Volume 2 discussion, so it covered autumn ’72 to the end of Live Rust. There’s his ’74 tour, the bar dates in ’75 and ’76, and then there’s this one. At the time, he said Boston and New York were recorded multi-track. I said, “Here’s my cassette.” Later, he called me up and said he loved it and it’s going to come out somehow.

The running order is different, though…
Neil has reordered it chronologically. It looks like he’s also divided the album into two sets, one of which is my original mono PA cassette. For the songs that were in my tape from New York and Boston, they’ve gone back to the multi-tracks.

You touched on Archives 2 earlier. Neil’s website teases several tantalising releases for that period, like the May 1978 live recordings from The Boarding House in San Francisco…
What about Live At The Rainbow from ’73 or the tape from the Bottom Line in ’74? Neil has a body of work that any artist would have been proud of. It’s headspinning.