If, at this late date, you still need proof Neil Young is not a man to be trusted, something akin to that arrives about two and a quarter hours into his show at London’s O2 Arena. 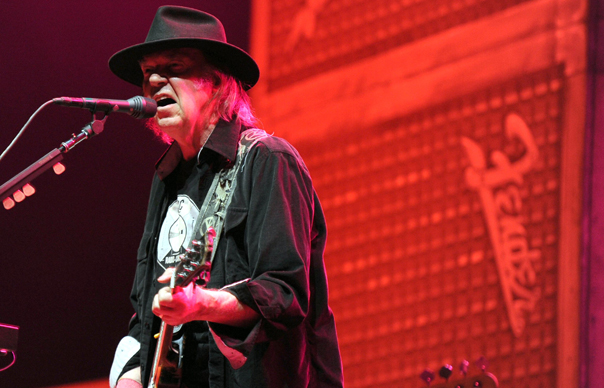 If, at this late date, you still need proof Neil Young is not a man to be trusted, something akin to that arrives about two and a quarter hours into his show at London’s O2 Arena.

By this point, Young has managed a grand total of 15 songs, mostly in the resilient company of Crazy Horse, and is making his first extended address to the crowd. “Frankly, a lot of times tonight we kinda sucked,” he says. “But, with what we do, that happens.”

One can understand the second part of Young’s statement: controlling such wild and capricious electric music is a necessarily tricky business. But what, bewilderingly, constitutes a non-sucking show for Neil Young? It is hard to recall, from my limited experience, one of his shows that has been simultaneously so ominous, joyful, ambitious and – a real shock, this, considering the unsteady reputation of Crazy Horse – tight. Perhaps a good night for Young resembles the prickly evening he spent in Newcastle last week, enjoying a faintly adversarial relationship with some sections of the crowd? Or the reception accorded “Walk Like A Giant” on Saturday, when substantial portions of the Dublin audience reportedly fed their boos into the song’s cacophonous end section?

Perhaps the generally delighted response that “Walk Like A Giant” receives here – after 15 minutes of whistled refrains, exploded verses and grandly tumescent solos, then ten more minutes of brute shaped feedback – riles the staunchly contrarian Young. It’s possible, though, that a reasonable percentage of the crowd are a little schooled in the noise-rock that Young to some degree inspired, but at least affects to be mostly ignorant of (in the phenomenally unreliable “Waging Heavy Peace”, remember, he claims implausible kinship with Mumford & Sons, remember).

So “Walk Like A Giant”’s coda fleetingly recalls My Bloody Valentine’s “Holocaust” jam on “You Made Me Realise”, but soon enough moves on to a less intense, more abstracted place; closer, maybe, to the dissonant drift found in some extended pieces like “Expressway To Yr Skull” and “The Diamond Sea” by Young’s one-time touring partners, Sonic Youth.

Crumpled balls of paper are blown across the stage like tumbleweed. Rain falls and lightning crackles on the PA (at least in part sampled from the Woodstock movie: “Please keep away from the towers!”), in sync with the feedback. There is a sense that Crazy Horse are huge and elemental, transcending their barn-band notoriety. Much of these Alchemy tour shows, fitting for the arenas they’re played out in, seem predicated on an idea of music as a force of nature, describing and confronting environmental catastrophe. On “Like A Hurricane”, Frank ‘Poncho’ Sampedro plays an organ suspended on wires, rocking back and forth as if buffeted by the song’s lyric. One of two unreleased songs, “Hole In The Sky”, makes the ecological theme explicit, as the calm after the storm of “Walk Like A Giant”.

“Hole In The Sky” acts as a prelude to Young’s acoustic set, mostly solo apart from a little harmony from Ralph Molina and some backup acoustic from Poncho when Young switches to piano on “Singer Without A Song”. There’s a “Harvest” feel to that last new song, which conceivably signals which direction Young may move in for his next album (that it’s been eight years since “Prairie Wind” suggests that facet of his music is due to be revisited). Even on “Comes A Time”, a portentous “Blowin’ In The Wind” and an exceptionally lovely “Red Sun”, however, he stalks the stage with his guitar, harmonica and radio mic, rarely facing up to the audience, seemingly engaged in face-offs with an array of ghost accompanists.

When those duelling partners are flesh and blood – Sampedro and Billy Talbot – there are long sections when Young seems pointedly oblivious of the 20,000 people watching his every move. The show begins with theatrics: scurrying scientists and technicians (one wonders if Elliot Roberts runs an internship programme for mature jobseekers who want to join the sprawling crew), The Beatles’ “A Day In The Life”, and a po-faced standing to attention for “God Save The Queen” (better understood as a typically daft whim rather than anything profound).

But as the Union Jack drops and the Crazy Horse flag takes precedence, a less obvious stagecraft takes over. Young begins “Love And Only Love” in a stomping head-to-head communion with his bandmates, in a rut that he will stay close to for much of the next two-and-a-half hours. The giant fake amps appear to be contributing spectacle and scale, but actually they serve to shrink the stage, keeping Crazy Horse in tight proximity to one another. This is big music made by small and fallible human beings, is the apparent subtext, even though they aspire to walk like – and often, miraculously, sound like – giants.

Although there are hits, after a fashion, in tonight’s set – relatively concise readings of “Powderfinger” and “Cinnamon Girl”, an unusually menacing “Mr Soul”, a first encore of “Like A Hurricane”, shredding and another electrical storm for “Hey Hey, My My” – Young’s focus is on the critical longueurs. For all the monolithic lurch and taste for feedback, there’s a tenderness and aesthetic prettiness to Young’s performance that’s not acknowledged as much as it deserves.

He sings beautifully, for a start, high and strong, whether it be finishing off “Blowin’ In The Wind” a capella, or harmonising with a startlingly drilled Crazy Horse between powerchords at the end of that momentous “Love And Only Love”. Before “Walk Like A Giant” devolves into its clangorous finale (as extreme as anything on “Arc Weld”, if not more so) with Young manhandling an FX box inside one of the fake amps, he makes an eloquent further case for the song as a new classic in his repertoire.

“Psychedelic Pill” remains less potent, even if familiarity and roadwork have given it more gonzoid charm. In one of the usual multitude of baffling decisions, Young appears to be playing “Psychedelic Pill” every night and never going anywhere near a much stronger song from last year’s album, “She’s Always Dancing”. The real “Psychedelic Pill”-era keeper, though, feels like “Ramada Inn”, in which Crazy Horse’s strength is turned in on itself, so that the heaviness adds depth and detail to the fragile narrative, instead of overpowering it. The delicacy is remarkable, and it’s frustrating to think that such a fine song might well be retired after this tour: the fate of so many latterday stand-outs by Young – what chance of “No Hidden Path” returning, a highlight last time I saw him play, in 2008?

On Saturday night, Bruce Springsteen played across the city at Wembley, took requests, dug spontaneously into neglected pockets of his career, and rolled out “Darkness On The Edge Of Town” in its entirety on an apparent whim. In contrast, Young works methodically within the fixed parameters of each project. For Alchemy in Europe, his dress code appears to be a rigorous all-black, from hat to workboot (Poncho, meanwhile, appears to be sleeping in a Hendrix t-shirt with the sleeves ripped off), and his setlist is, if not immutable, then fairly predictable. Ten of tonight’s 17 songs have figured at all of the recent UK shows, and only one – that unexpected “Red Sun”, from 2000’s “Silver And Gold” – is unique to the O2 performance.

With Young, the spontaneity comes within the songs, as he wrestles with their enduring possibilities, night after night. At the moment, “Fuckin’ Up” seems key to understanding where he’s at: tempestuous at first, a fraught melodic rush, before it devolves into a gurning, camp and, to be honest, slightly over-extended vamp with Poncho. Laughing uncharacteristically, it’s here that Young most vigorously asserts his persona for the current project – the goofy guy fucking around with his old, long-suffering, kind-of friends. Whether we choose to swallow it is besides the point; the spectacle is ridiculous, but thrilling (and weirdly reminiscent of “Whole Lotta Rosie”, when the crowd wade in, too).

At the end of Los Lobos’ excellent support set, David Hidalgo dedicates a song to Danny Whitten and then begins to play something that sounds audaciously like “Everybody Knows This Is Nowhere”, but actually turns out to be a site-specific, Horse-style rereading of “La Bamba”. Three hours later, Young finishes up a gorgeously cranky “Roll Another Number”, baits the management with some rhetoric about fines and curfews, and lunges into “Everybody Knows This Is Nowhere” itself. Worth noting, finally, that Crazy Horse play Liverpool Echo Arena on August 18, then are back here at the O2 on August 19. Tickets are still available.

Fork In The Road