When Mick Jagger recently appeared in a promotion sketch, dryly describing these Monty Python reunion shows as "a bunch of wrinkly old men trying to relive their youth", it demonstrated that the Pythons still have the rock star heft of their ‘70s pomp. 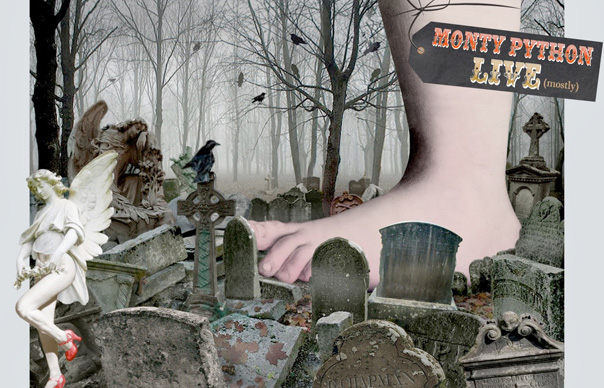 When Mick Jagger recently appeared in a promotion sketch, dryly describing these Monty Python reunion shows as “a bunch of wrinkly old men trying to relive their youth”, it demonstrated that the Pythons still have the rock star heft of their ‘70s pomp.

You might even wonder whether Jagger himself experienced a twinge of jealousy when the Pythons sold out their 10 date run at London’s O2 Arena in approximately the same length of time as it takes to recite “The Parrot Sketch”; the longest stint the Stones have had here is two nights. Certainly, there’s a sense that these Python shows are akin to a legendary rock band getting together for – possibly – one last hurrah, to play their greatest hits to an audience of whooping fans. But, equally, as you watch the arena fill up with men wearing knotted handkerchiefs on their heads or Australian cork hats, the vibe feels a little like a geek convention.

Inevitably, the speed with which these shows sold out – 200,000 tickets in all – demonstrates there’s still considerable love for all things Python out there. Though arguably it might prompt you to consider the power the Pythons continue to exert, 30 years on from their last substantial work. Certainly, bearing in mind the comedians who usually enjoy extended runs at the O2 – the likes of Michael McIntyre, John Bishop, Micky Flanagan, Russell Howard – you could be hard pressed to identify a particular legacy Python has left embedded in British comedy. The loopy and iconoclastic spirit of experimentation they pioneered in the late Sixties has been replaced by the tepid observational comedy of McIntyre, or the kind of offence model favoured by Frankie Boyle. Television’s recent big hits have been Miranda, Mrs Brown’s Boys and Benidorm – old-fashioned, regressive shows. Stewart Lee’s Comedy Vehicle appears to be a only voice of progressive comedy on air right now. Even Radio 4 – traditionally, the last bastion of that peculiarly Pythonesque brand of post-graduate, Fringe-dwelling humour – has allowed its comedy output to devolve into identikit panel shows, limp sketch shows and trad sitcoms. It says much about the current yield that the best comedy programmes on the station – Just A Minute and I’m Sorry I Haven’t A Clue – date from the same era as Python. Has anti-establishment humour that the Pythons championed has run its course?

Conceivably, then, these reunion shows serve to remind us of a different, arguably richer time for comedy, while allowing each of the key participants to trouser a large pile of cash in the process (one hopes, too, the family of the late Graham Chapman will also enjoy the benefits of these shows). Anyone hoping the Pythons might revert to their original subversive tendencies and bypass entirely their greatest hits in favour of deep catalogue cuts and obscure sketches is bound to be disappointed. This is definitely a case of: and now for something reassuringly familiar. Much as a Stones show is going to draw heavily from the impressive arsenal of hits at the band’s disposal, so this Python reunion is about the classics. As with the Stones, Python may have been daring and risqué in their prime; but no one’s here to see them trot out a bunch of new material.

Reassuringly, the Pythons do not particularly bother to bring along any new sketches to the party, nor update any of the jokes. There are a couple of passing references to Michael Palin’s career as a travel broadcaster, alongside telling mentions of John Cleese’s latest divorce and the High Court case over royalty rights to the Spamalot musical which reportedly triggered this reunion. Other than that, these sketches are untouched. Timothy White’s is referenced, a pound note changes hands, canned pre-cooked pork products are in abundance. Carol Cleveland still only has three lines of dialogue. There are some concessions, however. Terry Gilliam makes full use of the O2 screens for some new animation – an opening image of Graham Chapman’s head emerging from behind Earth, to Strauss’ Also Sprach Zarathsutra is rapturously received – while classic sketches, many of them featuring Chapman, are interspaced with the live sketches. There are other, arguably less welcome interruptions. There are too many dance routines ‘inspired’ by Python sketches. They might be a necessary exigency to allow for costume changes, but rather than evoking, say, the Sixties’ revue show model instead they bring to mind the kind of witless sequences that play out behind auditioning contestants on The X Factor.

In fact, the show draws heavily on the troupe’s musical numbers. The songs were always a slightly weird anomaly in the Python canon; I always thought there were brought in to pad out the later albums when no one was really making much effort to write proper sketches. Tellingly, perhaps, half the material on the 1980 Contractual Obligation Album are songs. Eric Idle – a man with some heavy musical connections himself – was the troupe’s key songwriter. Incidentally, he is also this show’s director and gives himself plenty of opportunity to sing here: he has two big song numbers in the first 30 minutes. It’s a shame, I think, as Idle’s greatest strengths during the Python’s TV run were his word-play sketches – the man who speaks in anagrams, “Nudge-Nudge”, “The Travel Agent Sketch”. Incidentally, “The Travel Agent Sketch”, with its marvellous climactic rant, is one of the main omissions from the show. Of course, while each Python brought their own specific qualities to the table. John Cleese and Graham Chapman’s material was often cruel, while Michael Palin and Terry Jones’ material tended towards absurdities like the Philosopher’s Football Match. They all excelled as elderly pepperpots, of course (for the record, Gilliam is the first one in a dress tonight), and there’s a genuine delight in watching a dragged up Jones and Cleese, shrieking at each other in those ridiculous voices during “The Death Of Mary, Queen Of Scots Sketch”.

Cleese seems least match fit. Unlike Palin and Idle, who seem astonishingly sprightly, he appears to struggle slightly with delivery while his voice sounds hoarse. There are flashes, though: his remorseless grinding down of Palin during “The Argument Sketch” or the way he snaps maniacally at Jones: “It’s a fucking albatross, isn’t it?” The deathless climax to “The Parrot Sketch” is noticeably muted. Incidentally, they exit with “The Parrot Sketch” which morphs magically into “The Cheese Shop” (no bouzouki player, sadly) and an encore of “Always Look On The Bright Side Of Life” – their “(I Can’t Get No) Satisfaction”.

The Pythons are seasoned live performers, of course. In their pre-Python days, they were members of either the Footlights (Chapman, Cleese, Idle) or the Oxford Revue (Jones, Palin); their earliest forays on screen (The Frost Report, At Last! The 1948 Show, Do Not Adjust Your Set) all took place in the days where television was effectively a live medium. As such, they embraced the idea of taking Python out on stage – there’s three live albums to show for it – so what we see here at the O2 is very much in keeping with established traditions. Presumably, there’ll be a DVD and live album to document this run of shows, too. Whether or not it’s definitely the end – after the run ends, the Pythons claim, they will run down the curtain and join the bleedin’ choir invisible – remains to be seen. But the sight of grown men in dinner suits singing a song about the llama in dodgy Spanish accents remains an unalloyed pleasure.