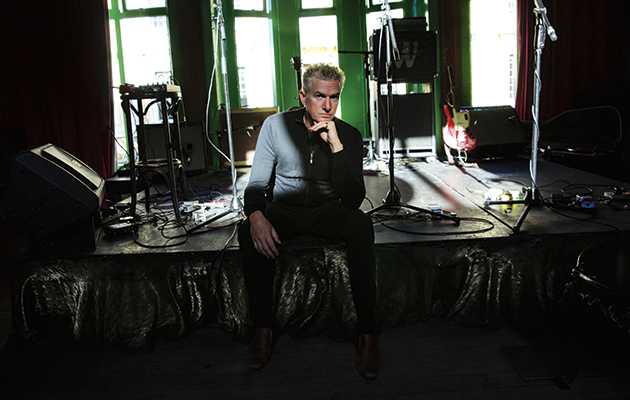 “I’m not sure why we ended up in Great Linford [near Milton Keynes], but it’s a good recording studio. Polly had been recording at Townhouse 3 as well, and we were all very upset when that studio got closed down. I think she was looking for another studio that had the potential to be a bit like that. I think she wanted to be away from where she was living too – you stayed at Great Linford. She was on a very particular path there, she was making quite a straight record in a funny way. I’m not quite sure how she got to that point because it didn’t seem very typical of her, to be honest. But, you know, she’s a real ‘zone’ person. She gets into the zone of what she wants to do and that becomes the focus, very strongly, for what happens with each project. That’s where everything is focused. I was credited as a producer on Stories…, but there’s a sort of arbitrary side to that, really. The producer is the person who guides the overall sound, and to some degree, sometimes everyone’s doing that. All the Bad Seeds stuff is usually credited as ‘produced by Nick Cave & The Bad Seeds’, although there’s obviously people in the band who were doing more of the production work than other people – usually me and Nick and Blixa. With Stories… we were there from the beginning, so it was treated like a team. Polly took us in, me and Rob Ellis, and wanted us to guide the production. So then you feel more of a responsibility to always be on board, and to always have an idea or an opinion, as opposed to skiving off and not being involved for half a day or whatever.”

“It was great recording in a church. We spent about five weeks there. It was all close mic’d – I don’t think we used much of the ambient sound ’cos it was just too wild. But a bit seeps in anyway. Polly became very interested in war themes and WWI, and a couple of other conflicts, and I also have an interest in some of that. So we discussed a lot of that stuff. She had a lot of ideas about it, but I didn’t contribute to any of the writing – Polly doesn’t really co-write lyrics with people [laughs], she works very hard on them in her own time. But we talked a lot about ideas and exchanged ideas. Polly used our voices a lot on this and her latest [2016’s The Hope Six Demolition Project], she likes ensemble singing, and on Let England Shake there’s quite a few bits where my voice is featured, like on “The Colour Of The Earth” where I sing some of it solo – that’s an odd one, isn’t it? But then the most beautiful bit is when we’re all singing together. She’s a much stronger singer than I am but the blend is important. It was hard to envisage something this unusual-sounding having a big impact – by the end we were thinking: ‘Is everyone gonna think this is crazy?’ It’s such a weird record.”

Mick Harvey
Four (Acts Of Love)
Mute, 2013
Harvey’s strong sixth is a compact song-cycle, featuring his own songs alongside covers of PJ Harvey, The Saints and Van Morrison.

“I’m not really an avid songwriter. It’s part of my creative outlet, but I do other stuff. I just work on music really, I’m a ‘music maker’ or ‘arranger’ or something. But I’ll have a song or two pop up every couple of years, and I started doing those solo records as I wanted to get to something elemental about songs that were important to me. Having worked on other people’s songs so much – which very often I can relate to a lot, and sometimes not so much – and then doing all that Gainsbourg stuff, I was keen to just present something that was closer to my own personal taste. The kind of songs I’m interested in are, for the most part, pretty intense and quite hard work [laughs], I think, for most people. That became a whole thing where the performance was also really stripped back to a pretty raw condition, for nothing to be in the way of the song. So that’s what I’ve been doing, and in the process of getting to Four I found a way into writing songs, so it became a good mixture of all the different things I’m interested in. On my solo albums in the last few years I’ve been taking a group of songs that really mean a lot to me and mixing them in with some of my own material. I played most of the instruments on Four, and prepared most of it at home, but I did record basic tracks in a studio in Melbourne, with Rosie [Westbrook] and JP [Shilo] playing on them. A lot of it’s reduced to a couple of instruments, and a lot of that was prepared in my music room at home.”

“This volume and [forthcoming] volume four delve more into songs that other people have sung, songs Gainsbourg wrote for Juliette Greco and France Gall in the ’60s. “I Envisage” [“J’envisage”, originally] was first recorded by Alain Bashung, and Serge didn’t record that song, so I didn’t come across it until I started researching more. For this one, I did half the basic tracks in Melbourne and the other half in Berlin. I’ve really only ever had to drastically change the arrangement of any of these songs when I discovered that there was something really great in the song, but that I didn’t like the way the music was done. I was a bit like that with “The Decadance”, for instance – the original is a pretty cheesy recording. On the next album there’s a song called “En Resilant Ta Lettre”, where Serge goes through a girlfriend’s letter, correcting all the grammar. I changed the music in that quite drastically actually, so it does happen from time to time, you know. But some of the string arrangements from the ’60s are great arrangements, and it’s fun just revisiting those. The Jean-Claude Vannier stuff’s really wild, yeah. Xanthe Waite has been doing the female parts at the live shows, so she sang on here. It’s really about trying to pick the right type of singer for the song. The next volume is mostly duets and girls singing, I’m doing much less singing on it. Xanthe sings a couple of those songs, too, and there’s about five or six different singers on it.”