There is a fairly telling moment, about three-quarters of the way through this mostly excellent night of three guitarists, at the Lexington, between the Angel and King’s Cross. 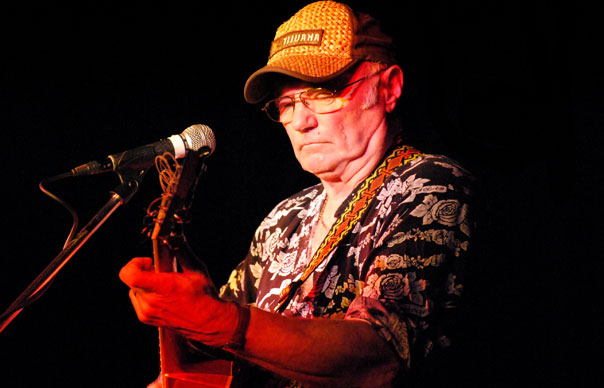 There is a fairly telling moment, about three-quarters of the way through this mostly excellent night of three guitarists, at the Lexington, between the Angel and King’s Cross.

Michael Chapman has just finished a remarkable solo piece and is off to prepare for an improvised session with his support acts, Dean McPhee and Daniel Land. I can’t recall the exact words, but the gist is, “This will finally stop people claiming I’m a folksinger.”

At 70, and finally, justifiably acclaimed as a more-or-less great songwriter and guitarist, Chapman has arrived at what we might call his ‘late-period John Fahey moment’. His early classics (“Fully Qualified Survivor”, “Rainmaker”) are being lavishly reissued. He is encouraged to revisit his old songs instrumentally, to showcase a liquid and elaborate technique (“Words Fail Me”). He has a new generation of admirers singing his praises.

What else to do, then, than act on the encouragement of one of those fans (Thurston Moore) and embark on a new venture as an avant-garde improviser? Tonight closes with Chapman, McPhee and Land working on the hoof in response to Chapman’s latest album, “The Resurrection And Revenge Of The Clayton Peacock” (a Leeds United reference to Adam Clayton, perhaps?). First, though, each takes a solo turn.

I’ve written a few times in the past about Dean McPhee (on his “Son Of The Black Peace” album and “Brown Bear” EP, for a start), and usually compared his reverberant solo electric pieces with Vini Reilly and The Durutti Column.

Tonight though, while no less atmospheric, there is something twanging and bluesier about his lovely instrumentals, which remind me of a bunch of acts who acted as dusty, rootsy, notionally more ‘organic’ outriders of post-rock in the 1990s: Pell Mell and Scenic, say, and perhaps Two Dollar Guitar. It’s especially apparent in a new tune called “Evil Eye”, rattling train rhythms cutting a swathe through blasted expanses.

Daniel Land, a new name to me, also seems to have certain 1990s antecedents for his quasi-ambient, fx-heavy sound: namely, players who stretched out the shoegazing template like Fuxa and some of Flying Saucer Attack’s Bristol associates (Light, maybe? Hard to remember now), as well as one who helped formulate that same template, Robin Guthrie. Not bad.

Michael Chapman, meanwhile, seems vigorously intent on proving, in the space of about 15 minutes, that he’s the match for most any revered Takoma School guitarist, old or new. The virtuosity is breathtaking, as Chapman uses his wedding ring as a slide and ramps up into a Jimmy Page-like flurry of notes (gifts already apparent on his ’69 debut, “Rainmaker”, it transpires). But there’s a sensuousness and warmth, too, a feel that makes the display so much more than a kind of downhome technoflash.

Chapman is one of the relatively few British guitarists to push the folk idiom into more experimental territory, compared with so many of his American contemporaries. Like John Fahey’s late work, though, there’s a sense that a piece like “Clayton Peacock”, diverting as it is, might signal a certain range, ambition and mischievous instinct while not necessarily being the best showcase of his skills.

Consequently, while this live take (rehearsed in 30 minutes, according to a wry McPhee; the remaining 90 minutes of their time slot was given over to “wine”) has less of the faintly industrial grind of the “Clayton Peacock” album, Chapman’s general Thurstonning is often too subtle to cut through the diligent work of McPhee and through Land’s soupier environments. Every few minutes, he revisits a bass-like theme, distantly reminiscent of Funkadelic, that is pleasingly incongruous in a piece which mostly has a kind of free rock predictability to it, if that makes sense. Mostly, though, the endeavour feels more like a forward-thinking way to end a good night, rather than a climax.