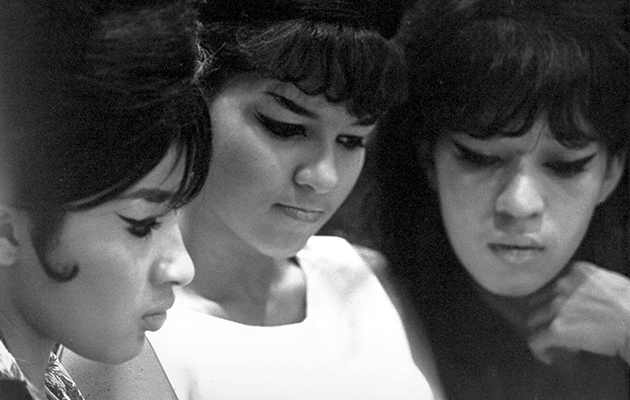 TEMPO: They liked recording for Phil. They respected him greatly, and the hits then came mostly from Phil – you could get the same Wrecking Crew on a record where the song was a flop, and the same Wrecking Crew couldn’t make it a hit. It’s all about the song – song first, production second, singer third. Phil would record it in stereo, but he would at the same time record it with all the echo in monaural, and invariably he would use the monaural recording because that was what was best, certainly in those days. He’d bring the singer in at another time, ’cause then he could just concentrate on them.

SPECTOR: I remember so much about “Be My Baby” especially, when Hal Blaine went ‘boom boom boom bow’ and I came in: [sings] “The night we met…” We did one song a day – you can do two or three or four now, but back then you didn’t have the equipment to do all that. It took a long time to do “Be My Baby”.

TEMPO: Ronnie was pretty consistent – I think sometimes Phil went a little overboard with the vocals, because usually after three or four or five attempts, they had it.

SPECTOR: All of the musicians said, “Now, wow, that’s a voice”, you know, that can go with our stuff! And it just worked – I’d learn my songs in the hotel, ’cause they had a piano there, and then I’d go over to Gold Star, and they went nuts.

TEMPO: We always worked in the evening, and we often wouldn’t finish until early in the morning, that’s the way it was. Phil and I would often go to a deli or Pink’s hot dog stand at three or four in the morning. When Phil would mix, the sound would sometimes begin ringing back, there was so much echo, and that’s the point where most of the hits came from. You couldn’t separate anything, but you could control it by how much echo you’d put on this track or that track. You’d bury the horns and make the drums louder. He also controlled it by having tape echo, which was very important to Phil – tape echo plus the echo chamber. One time we were in the studio running it down and it went from sounding great to terrible. “What happened?” I said. And [engineer] Larry Levine said, “Oh, we ran out of tape on the [echo] tape machine, I’ll roll it back and start the tape again”, and the minute that sounded, it became good again.

LOVE: How was Phil then? Well, it was a whole lot normal in the studio for those sessions, because the Blossoms would not have stood for it. By the time Phil got really crazy, we weren’t recording or having anything to do with him. He went to Europe after all the success and that’s when he became nuts. I could never testify that I saw him with a gun. I went to sessions and they said he had a gun, so I’d get in my car and go back home – I was there to record and sing, not to see no fool with no gun. I used to tell the musicians, “Guns don’t kill, men kill! Why you sitting in here with some crazy person with a gun?” I used to tell him that all the time, “You’re crazy, and so are the people in this studio – you know I’m not coming in here with you with no gun.” There’s always accidents, that’s why they say ‘accidental shooting’, and I wasn’t going to be one of those.

TEMPO: I had always been a gun collector. But sometimes you’d get tired of it and see another gun that you like more. So you sell that one to somebody and you buy another one. Over the years, I wound up selling several to Phil, so I would say I’m probably the source that most of his guns came from. I’m not happy about that, but how could I know that he was going to use them in the wrong way? Was Phil more eccentric later on? Yes, but he was always pretty eccentric. I was in the studio for “River Deep Mountain High”, and the echo had taken it to a place where it no longer made sense to me. I said, “Phil, I think the echo may be overdone.” He said, “No no, it’s fine, it’s fine.” He wasn’t listening any longer, I guess he was so impressed with his success that he felt he knew it and you didn’t.

SPECTOR: If you’re a girl like I was, who grew up with very humble beginnings, to have a hit record and to get in your car or go to a radio store and hear your record, it was like, “What?!” You’re in shock. It was the greatest time to have a hit record. Wherever I went, whoever I saw, everybody talked about “Be My Baby”.

TEMPO: I knew it would be a hit when we left the studio! At the end of the record, where it broke down to the drumbeat and then boom, the band hit, I said, “That is fantastic!” I knew it was gonna be a smash. Of course, it still sounds great today – it’s a great song and I’m glad to have been a part of it.

SPECTOR: It was just the greatest fun time, I wish that I could bring back those days, the early ’60s where everybody was just so excited to have a hit record, they were so excited to be onstage. Brian Wilson played “Be My Baby” a hundred times every single day – he’s told me that. Brian wrote “Don’t Worry Baby” for me. I thought that was the greatest follow-up to “Be My Baby”, but of course I couldn’t record it because other people wanted to write all my songs… so I didn’t get to do that. But I sing it in my show now.

Ronnie Spector forms an early version of The Ronettes

“Be My Baby” is released, rising high up the charts in the UK and the US