Lou Reed at 70 arrives onstage at the Festival Hall to do his bit for Antony Hegarty’s Meltdown programme dressed like a stroppy teenager in a baggy black basketball vest, gold medallions around his neck and what looks like a pair of tracksuit bottoms. He looks frail these days, though tonight slightly less so than last year at the Hammersmith Apollo, and perhaps no wonder when you consider what he’s put his body through over the years before he embraced his current sobriety. 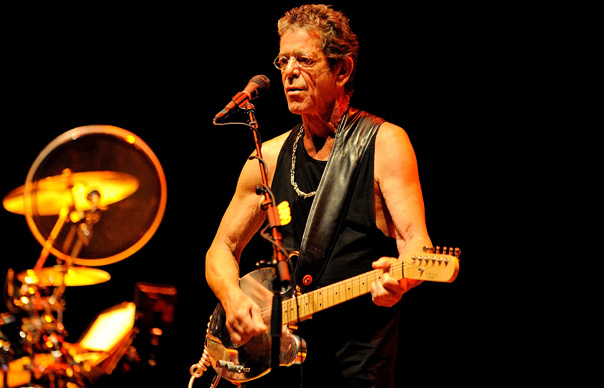 Lou Reed at 70 arrives onstage at the Festival Hall to do his bit for Antony Hegarty’s Meltdown programme dressed like a stroppy teenager in a baggy black basketball vest, gold medallions around his neck and what looks like a pair of tracksuit bottoms. He looks frail these days, though tonight slightly less so than last year at the Hammersmith Apollo, and perhaps no wonder when you consider what he’s put his body through over the years before he embraced his current sobriety.

There’s an enduring toughness about him, though, and he remains someone you would not willingly tangle with. His cussedness is of course legendary and that has not diminished with age or anything else. It’s on show early tonight. His first number is an ear-shattering version of “Brandenburg Gate” from last year’s Metallica collaboration, Lulu (opening line: “I would cut my legs and tits off when I think of Boris Karloff and Kinksi in the dark of the moon”). Its churning climax is a furious thing, and Tony “Thunder” Smith’s monstrous drumming and much guitar shrieking are still ringing in my ears when some wag shouts “Louder!” to audience titters.

Lou’s really not amused. “Was it too quiet for you, asshole?” he asks, looking a little homicidal, and not really expecting a reply. Significantly, there’s no response, just a moment’s uncomfortable silence, a mute tension, as Reed glares in the general direction of the now-humbled heckler. It was always thus with Lou, the irony being that tonight’s show has been billed as an audience-friendly showcase for a selection of Velvet Underground and solo classics, with a few pieces from the critically-roasted Lulu also included. Anyone turning up tonight, though, expecting anything like a greatest hits set built around, say, faithful renditions of “Perfect Day”, “Satellite Of Love”, “Vicious”, “Walk On The Wild Side” and “Sweet Jane” will have been in for a typically rude awakening.

Only one of these songs is in fact played and it takes a large part of the crowd a couple of minutes to even recognise “Walk On The Wild Side”. There may be as many more of the crowd who are taken aback that also from his solo career he should pluck a fairly obscure song called “Think It Over” from the hardly better-known 1980 album, Growing Up In Public. They similarly would probably not have earlier predicted that one of the show’s highlights would turn out to be the grimly beautiful “Cremation” from 1992’s Magic & Loss, another album that may have passed more than some of them by.

They are certainly more at home with a wonderfully-realised “Street Hassle” and are excited when a pretty pristine “Heroin” is wheeled out very early in the set, a version made quite spectacular by what saxophonist Ulrich Krieger brings to it, which is a noise that sounds less like a sax than the terrifying wailing of John Cale’s viola. A positively jaunty “Waiting For My Man” is also inevitably a crowd pleaser, tonight’s arrangement playing up the song’s pop roots, with romping sax and an almost doo-wop panache. “Sad Song”, from Berlin, meanwhile, has rarely sounded so magnificent, rising to a shattering crescendo.

As great as it is to hear these old songs so enlivened and refreshed, the brilliant dark heart of tonight’s show is the four songs from Lulu, so maligned on release. “Brandenburg Gate” and “The View” are fierce enough, but “Mistress Dread” is a ferocious avalanche of noise, again powered by Tony Smith’s incredible drumming and much guitar derangement from Lou and Aram Bajakian. Much later, “Junior Dad” brings the main set to an astonishing end, the song unfolding like a drifting elegy, as moving and handsome as something like “Coney Island Baby” or “Tell It To Your Heart”.

“Junior Dad” goes on for 20 extraordinary minutes on Lulu, a symphony of sorts. Tonight’s version I’m sure is shorter, although it’s possible I became so lost in it that time passes without me noticing. Anyway, it seems to end abruptly, its epic aching grandeur suddenly winding down, which causes some confusion because people aren’t sure if it’s over. They seem in fact to be waiting for something else to happen, a more obvious climax, for instance, something that’ll get them on their feet, which Lou gives them with a single encore, a careening “White Light/White Heat”.