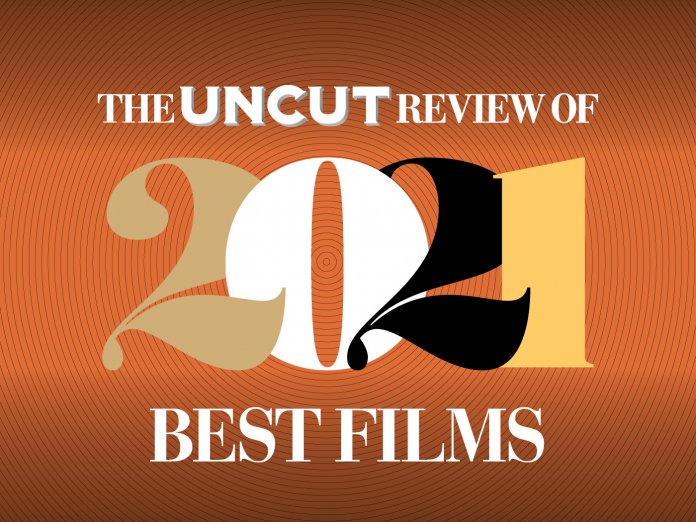 Frank Herbert’s space epic returned to cinema, sleeker and saner than David Lynch’s version, although you still wonder what lurid extravaganza Alejandro Jodorowsky would have made of it. By contrast, Denis Villeneuve treated the material with stately, hyper-grandiose sobriety. It still felt like the intro to a bigger film, but Charlotte Rampling, Rebecca Ferguson and Timothée Chalamet contributed gravitas to sway your scepticism, while Patrice Vermette’s designs were dazzling.

19 The Power Of The Dog
Director: Jane Campion

Campion returned with a modern western that unpicks the male codes of a genre. Based on Thomas Savage’s superb, long-overlooked novel, it starred Benedict Cumberbatch and Jesse Plemons as rancher brothers, whose lifestyle changes when one brother’s new wife (Kirsten Dunst) moves in with her decidedly unmacho son (Kodi Smit-McPhee). Shot in New Zealand, this was a magnificent landscape film that also mapped dark inner territory.

Set in 1995, this Oscar-nominated war drama from Bosnian writer-director Žbanić was about a schoolteacher working as a translator for the United Nations in Srebrenica and trying to save her family when her city was taken over by the Serbian army. Jasna Djuricić gave an animated performance as a heroine of action and conscience and compassion, counterpointing what Žbanić showed as the shocking ineffectualness of the United Nations command.

This black comedy deserved attention for its ruthless gender polemic. Carey Mulligan plays a woman on a mission, testing men’s propensity to abuse and confronting enablers in positions of power. Writer-director Fennell scored this reputation-making hit between gigs as showrunner on Killing Eve and writer on Lloyd-Webber’s Cinderella.

Daniel Craig’s Bond finally returned, but not for long – taking his leave of the role in a movie that worked some radical twists on the legend. This was the most earnest 007 outing in a while – a Bond in search of closure! – but it had intelligence, energy and daring and was worth it just for Ana de Armas stealing the show in a Cuban fight number.

15 The Many Saints Of Newark
Director: Alan Taylor

Many were divided on this belated prequel to TV’s The Sopranos, but it had all the ingredients to signify authenticity – including direction by series regular Alan Taylor, a script co-written by originator David Chase and a winning lead by Michael Gandolfini, son of the late James, playing a young, up-and-coming Tony Soprano. Ray Liotta made up for his recent rarity by playing twin Moltisanti brothers.

The best film ever to be named after a number by Dave Dee, Dozy, Beaky, Mick & Tich. Detective mystery, ghost story and retro pop musical, this dazzlingly executed paean to the glitzy, murky past of London’s once-bohemian hotspot pitched Anya Taylor-Joy
and Thomasin McKenzie as alter egos in different eras, in a film that felt like Absolute Beginners and Polanski’s Repulsion colliding in a glare of neon.

A British meta-chiller that looked back to the Video Nasty moral panic. Enid worked as a censor at a thinly veiled BBFC, trimming horror films’ grislier moments but fascinated by their extremes – and haunted by the disappearance of her sister. Fully paid-up genre buff Prano Bailey-Bond makes an inventive debut, with Niahm Algar hitting an unsettling note as Enid, while – as a cut-price schlock merchant – Michael Smiley was sublimely slimy.

This depiction of a notorious episode in modern American history starred Daniel Kaluuya as Black Panther militant Fred Hampton and Lakeith Stanfield as William O’Neal, recruited by the FBI to infiltrate Hampton’s circle. Recounting a story that has renewed urgency in the Black Lives Matter era, this compellingly evoked its era, while the two leads were terrific, playing men who are both opponents and brothers in arms.

French cinema’s most elusive auteur returned with a sumptuous fantasy, co-written and scored by Sparks’ Ron and Russell Mael. It elicited every reaction from ecstasy to infuriation, via pure bewilderment. The story of a doomed showbiz couple and their very strange daughter, it may not have been the finest hour of either Carax, Sparks, Marion Cotillard or Adam Driver, but taken all together, it was undeniably, extravagantly one of a kind.

Some feel that a little Wes goes a long way, and this one went a very long way indeed – from Liberty, Kansas, to Paris, or rather the imaginary town of Ennui-sur-Blasé. Anderson celebrated all things Gallic and the vintage years of the New Yorker in an all-star fantasy that took his OCD sensibility into the realms of wild overload. No-one else could conceivably have attempted it, though.

Previously downbeat Mexican director Franco upped his game with this intense, confrontational drama that imagined a popular uprising in Mexico and its ruthless quashing by the establishment. Executed with an icy rigour worthy of Michael Haneke, New Order was widely attacked in its native country and elsewhere, but offered a chilly vision of precarious privilege and social collapse that was just crying out to be remade in Beverly Hills.

The year’s best pig film, not to be confused with Nicolas Cage vehicle Pig. This was a depiction of life through porcine eyes, a portrait of a sow and her litter (plus the odd cow and some intrepid chickens). Russian documentarist Kossakovsky placed a roaming camera at ground level to offer a view of four-legged life that was poetic but totally unsentimental – and quietly revealing about the drama of animal emotions.

A documentary that was not what it seemed, this introduced us to Mexico City police officers Teresa and Montoya – professional and romantic partners – and recreated the ins and outs of their daily beat. Then the fourth wall is whisked away as we met the actors who play them. Slippery but revealing and dazzling in its stylistic pastiche, with echoes of Scorsese, Serpico – even the Beastie Boys’ “Sabotage” video.

The Mael brothers returned with their second entry in our poll, here whipping off their masks to explore one of the longest, strangest adventures in pop history – mapping their progress from late-’60s art experiment, through ’70s stardom, to their current rebirth as revered doyens of hyper-literate wit. Whether discussing their transatlantic glory or the years of outsiderdom, the Maels mixed dry humour with candour in one of pop’s smartest, most celebratory documentaries.

A few years ago, the world at last began to catch up with the extraordinary voice and career of a neglected folk original and a central figure in the early-’60s New York music scene. This documentary portrait puts the seal on Dalton’s rediscovery, with Nick Cave among those paying tribute to a voice like no other and Angel Olsen reading from Dalton’s diaries.

After her superb The Rider – and before pumping up on Marvel steroids to direct Eternals – Chloé Zhao offered a poetic vision of American crisis, with Frances McDormand as a woman leaving her hometown to join the armies of mobile-home nomads searching for work. A contemporary Grapes Of Wrath, it was as close as screen drama gets to documentary, with McDormand joined by a host of real-life American travellers memorably playing themselves.

The poet of low-key US realism (Certain Women, Old Joy), Reichardt delved into the past to offer a melancholic-comic vignette of early American capitalism, as two drifters in 19th-century Oregon teamed up to make a living selling hot cakes – using stolen milk from the first cow in the territory. Starring Orion Lee and John Magaro – plus a magisterially pompous Toby Jones – it was 2021’s most tender male love story.

After Velvet Goldmine and Dylan fantasy I’m Not There, Haynes offered a documentary that places New York’s greatest in the context of a tempestuous ’60s art scene – the world of Warhol and musical experimenters like La Monte Young. We learned a lot about Lou Reed’s painful, prickly youth, but it’s also very much John Cale’s film – plus you got the legendary “The Ostrich” in its full deranged glory.

1 Summer Of Soul (…or, When the Revolution Could Not Be Televised)
Director: QuestLove

Many suspected that in 2021 cinema would limp back ruefully, energies depleted, from lockdown. It couldn’t have been farther from the truth. Damage was done, yes, and it still remains to be seen whether theatrical releasing can rally after a year in which we all got morbidly locked in our streaming habits. After all, Tenet didn’t – despite hopeful predictions – save the box office in 2020. But it looks as if No Time To Die, Dune, even the critically unloved Venom: Let There Be Carnage might now be doing just that.

Then there was the cornucopia of films premiered at festivals: Berlin, Cannes and Venice offered their best editions in years, and that was just the European events. A-list auteurs like Jane Campion (The Power Of The Dog), Paolo Sorrentino (The Hand Of God), Paul Verhoeven (Benedetta) and Leos Carax (Annette) were all on aggressive form, although no-one was quite as aggressive as French breakthrough star Julia Ducournau, whose surprise Cannes Palme d’Or winner Titane proved that midnight-movie outrage could conquer the respectable red carpet. It was also a vintage year for music documentary, with titles on Karen Dalton, Sparks, The Velvet Underground and Led Zeppelin – and the fact that four music titles have made this Top 20 perhaps signals how much we’ve missed live music.

Nothing captured the live experience like Summer Of Soul, in which Amir “Questlove” Thompson of The Roots revives the magic of a long-overlooked event once famed as the “Black Woodstock”. Archive footage of the 1969 Harlem Cultural Festival features electrifying performances by, among others, Nina Simone, Stevie Wonder, Sly & The Family Stone, Mahalia Jackson and The Chambers Brothers. The film was a vital celebration of music and of political consciousness, but it was also an all-out sartorial fiesta, epitomised by the Afro-psychedelic threads of The Fifth Dimension. It’s been acclaimed as one of the best concert movies ever and watching it – especially with a live audience – felt as close as you could get to being there. In 2021, little could have felt more welcome, or necessary.