The year in Hollywood – and Colombia, Sweden and Newcastle… 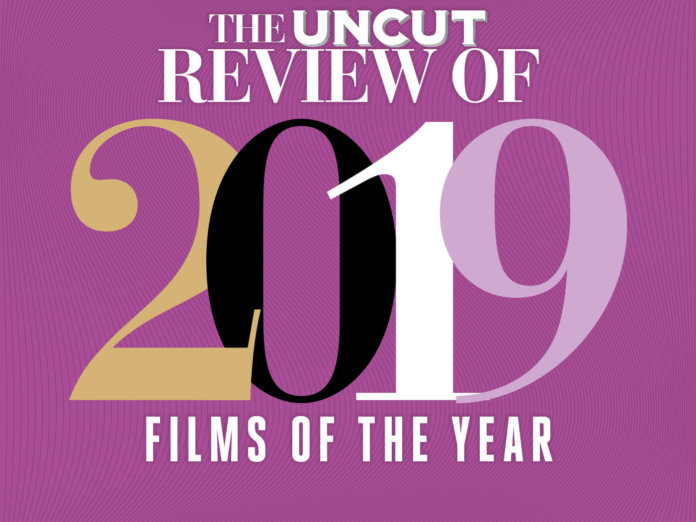 20 THE SISTERS BROTHERS
Director: Jacques Audiard
The first of Joaquin Phoenix’s appearances in our poll, this adaptation of Patrick deWitt’s novel placed Phoenix and John C Reilly as sibling assassins, stalking 1850s Orgeon in pursuit of their quarry. Coming so soon after the Coens’ The Ballad Of Buster Scruggs, Audiard’s film suggests a welcome renaissance in picaresque, revisionist westerns.

18 BLINDED BY  THE LIGHT
Director: Gurinder Chadha
Based on the memoir by one-time Uncut writer Sarfraz Manzoor, Chadha’s film mixed familiar coming-of-age beats – working-class dreamer seeks escape from a small town – with a more specific story  of a British-Pakistani teenager, trying to survive the cruelties of Thatcher’s Britain in 1987. The Springsteen-endorsed soundtrack underscored the ways in which the Boss has always served as a beacon for the disenfranchised.

17 ROCKETMAN
Director: Dexter Fletcher
After the success of Bohemian Rhapsody, Rocketman presents a similarly full-blooded account of the spectacular rise of  Reg Dwight from Pinner as he becomes Elton John, racing through his ’70s imperial phase and, eventually, an equally spectacular crash back to earth. Taron Egerton offers a game take on Elton, while Jamie Bell, as Bernie Taupin, provides low-key counterpart.

16 JOKER
Director: Todd Phillips
A supervillain origin story, Phillips’ take  on the maladjusted loner Arthur Fleck (Phoenix, again) who eventually becomes Batman’s nemesis passes by on  a cascade of Scorsese references (Taxi Driver; King Of Comedy) and  a killer performance from the lead. The film strove to be a statement  for our times, though was at its best when locked on to the committed intensity of Phoenix’s turn as God’s Lonely Clown.

15 US
Director: Jordan Peele
In its way, just as radical and unsettling as Get Out (Uncut’s Best Film of 2018), Peele’s follow-up pitted a family against their evil doppelgängers. What followed spliced sociopolitical satire with smart, full-blooded shudders as Peele’s protagonist Adelaide (Lupita Nyong’o) discovers a hidden underclass locked in a parasitic relationship with their terrestrial doubles.

14 SUNSET
Director: László Nemes
Nemes’ 2015 debut, Son Of Saul, was a bold if gruelling depiction of life in the Nazi death camps. For Sunset, the Hungarian director rewinds to an earlier era: a lavishly recreated late-imperial Budapest in 1910, as the shadow of war hangs over Europe. We follow destitute milliner Írisz Leiter (Juli Jakab), as she returns to her hometown from Trieste in an attempt to untangle family secrets. Cue ruthless anarchists, sinster shopgirls and an ostentatious procession of headwear.

13 SORRY WE  MISSED YOU
Director: Ken Loach
At 83, Loach feels more vital than ever. His follow-up to I, Daniel Blake is yet another scathing survey of Broken Britain, this time exploring the toll of the gig economy on a hard-up Newcastle upon Tyne family. Cruelty, exploitation and economic isolation follow, while leads Kris Hitchen and Debbie Honeywood bring dignity and compassion to this heavy indictment of Britain’s gig economy.

12 HAPPY AS LAZZARO
Director: Alice Rohrwacher
Ostensibly set during the 1980s, where a rural community are tricked by an aristocrat known locally as “the Cigarette Queen” into working on her land in quasi-feudal conditions, this third film from the Italian filmmaker enjoyed an abrupt detour into magic realism and time travel. Such strange pleasures affirmed Rohrwacher as one of the most celebrated current Italian directors.

11 ATLANTIQUE
Director: Mati Diop
This debut from the French-Senegalese filmmaker tackled big contemporary issues – migrants, oppression, economic hardship – set around a construction site in Dakar. But alongside this socio-realism, Diop concocted a romance between young Senegalese lovers that morphed into a supernatural fable where drowned workers return to seek vengeance for their unpaid labour.

10 IN FABRIC
Director: Peter Strickland
As with his previous films, Berberian Sound Studio and The Duke Of Burgundy, In Fabric once again found  the fastidious yet delightfully subversive British director invest the language of ’60s and ’70s exploitation cinema with his own exuberant ideas. In Fabric concerned a haunted dress and its disturbing effects as it passes among wearers; imagine a giallo set in a provincial House Of Fraser.

7 KNIVES OUT
Director: Rian Johnson
After his sojourn in a galaxy far, far away, Johnson returned to Earth with this neo-noir mystery, a welcome throwback to the skill and ingenuity of his early films – Brick and Looper. This ingeniously constructed whodunnit found Daniel Craig’s detective investigating the murder of a wealthy patriarch – cue much rug pulling, dramatic mischief and narrative sleight-of-hand that both respected and revised the genre.

6 ASH IS PUREST WHITE
Director: Jia Zhangke
Over the course of 20 years, Jia has morphed from stark, political docudrama to more lavish, though equally authentic, surveys of China’s domestic upheavals.  This, his ninth film, is set in 2001, offers both gangster swagger and social critique, where the journey of Qiao (Tao Shao) from self-sacrificial moll to avenging criminal mirrors the country’s embrace of westernised capitalism.

4 MONOS
Director: Alejando Landes
Pitched somewhere between Apocalypse Now and Lord Of The Flies, Landes’ film unfolded in the remote mountains of a Latin American country, where a band of child soldiers guarded an American hostage (Julianne Nicholson). Landes captured the confusion  and chaos of the children’s anarchic life in this wild terrain, while Mica Levi’s eerie score accentuated the sense of foreboding as this fragile unit disintegrated.

3 MIDSOMMAR
Director: Ari Aster
Alongside Jordan Peele, Aster is making arthouse horror for the multiplexes, with both 2018’s Hereditary and Midsommar heavily indebted to ’60s and ’70s horror, yet given a gripping contemporary urgency. Midsommar channelled The Wicker Man – an American couple attend a mysterious festival in the Swedish countryside – but Aster artfully freighted his folk horror with notions of loss, grief  and emotional neglect.

2 MARRIAGE STORY
Director: Noah Baumbach
Families at war have been a recurring theme of Baumbach’s since his 2006 debut, The Squid And The Whale. This latest, for Netflix (following The Meyerowitz Stories), finds Scarlett Johansson and Adam Driver’s storied theatrical couple discovering that breaking up is hard to do. Their desperately sad situation was enlivened by incidental humour and Baumbach’s sharp, intelligent script – and given warmth and humanity by the leads.

1 THE IRISHMAN
Director: Martin Scorsese
For Scorsese, returning to the milieu in which he made his name, The Irishman had all the hallmarks of a greatest-hits set full of guest spots for old faces – the old gang back together for one last (?) hurrah, perhaps. A mob procedural about violence, loss and guilt, The Irishman enjoyed the decade-spanning sweep and operatic swirl of Goodfellas and Casino, brought to wintry life by a powerful cast – headed by Robert De Niro, Al Pacino, Joe Pesci and Harvey Keitel. But it has something else, too. The bitter tang of regret, a sense of spiritual ruin that came into focus as the story unfolded of Philadelphia mob hitman Frank Sheeran and his part in the disappearance of Teamsters union boss Jimmy Hoffa in 1975.

In the context of the year in film, The Irishman reminded us of the sheer power these big beasts could still muster. Younger filmmakers like Jordan Peele and Ari Aster jostled to assert themselves, while established names like Quentin Tarantino and Rian Johnson doubled down on their core specialisms. Beyond Hollywood, meanwhile, filmmakers including Alejandro Landes, Ciro Guerra and Mati Diop told stories that bristled with contemporary urgency, while Jia Zhangke and Alice Rohrwacher used the past as a narrative strategy to comment on the present. Yet The Irishman reminded us that the director remains a world-class player – over 50 years into his career, here reflecting the passage of time, finding  a sad, mournful tone and a weariness in this extraordinary story.