Cohen's turbulent '70s charted in the new issue of Uncut 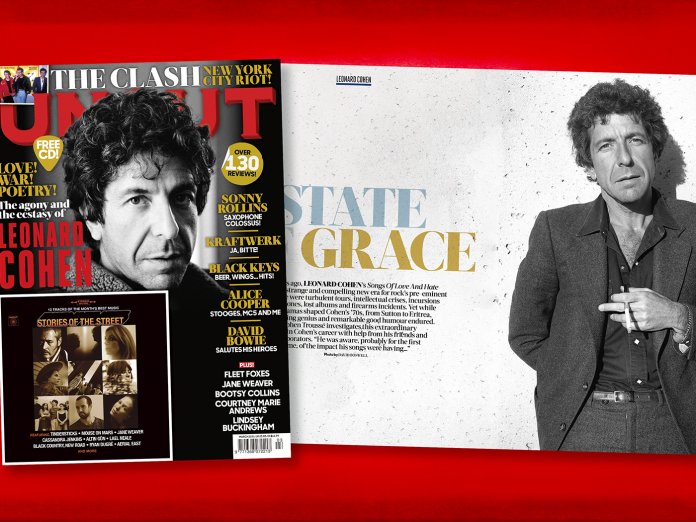 The new issue of Uncut – in shops now and available to buy online by clicking here – tells the incredible story of Leonard Cohen’s 1970s, as Songs Of Love And Hate ushered in a strange and compelling new era for rock’s pre-eminent poet. There were turbulent tours, intellectual crises, incursions into warzones, lost albums and firearms incidents. Yet as Stephen Troussé discovers, Cohen’s towering genius and remarkable good humour endured. Here’s an extract…

It’s the last weekend of the summer of 1970 and Leonard Cohen arrives in England leading an army. On the face of it, he’s at an all-time high. Songs From A Room, his austere second album, released in April 1969, spent over a month in the higher reaches of the UK Top 10 – only held off the top spot by The Seekers and The Moody Blues. His songs have become unlikely modern standards, covered by everyone from Nina Simone to Fairport Convention. He’s finally making money, too. After a decade scuffling around Europe, living on publishing advances and cadging from friends, he’s now picking up tabs and worrying about real estate.

“I was singing in folk clubs at the time, and I already had two or three of Leonard’s songs in my repertoire,” remembers Jennifer Warnes, an early adopter of Cohen. “‘Dress Rehearsal Rag’ was certainly in there, ‘One of Us Cannot Be Wrong’. His songs had layers of meaning. I was a fan of Brel and Charles Aznavour and Kurt Weill, European art songs, and Leonard seemed to fit right in. It had a little more teeth than the American folk music.”

Finally cajoled into touring by Columbia Records, Cohen had called on the producer of Songs From A Room, the irrepressible Texan maverick Bob Johnston, to play keyboards and round up a band, including Ron Cornelius on guitar and Charlie Daniels on fiddle, to tour the great capitals of Europe.

Johnston saw the tour as a chance to get out of the studio and let his Lone Star spirit out for a canter. Quite literally. Booked to appear in Aix-en-Provence, but finding the road to the festival blocked by a convoy of French hippies, Johnston commandeered a stable of horses for the band to ride through the Provençal fields. Astride a white stallion, dressed in a khaki safari suit and brandishing a whip, Cohen took to the stage and proceeded to lecture the audience, in French, about the competing claims of art and revolution. That night Cohen was the 1970 counterculture world spirit on horseback, fulfilling every Napoleonic dream that the small, studious, ambitious Jewish boy from Westmount, Montreal, had ever had.

But at what cost? On the evening of Friday, August 28, the Army – as Johnston had named the band after the triumph in France – pulled up outside a psychiatric institution in the heart of English commuterland. Henderson Hospital had been founded in 1947 as a trauma unit for shellshocked soldiers struggling to reintegrate back into civilian life after the end of World War II. By 1970, it had become a “democratic therapeutic community”, fostering a communal approach to helping
“outsiders and misfits” who had been failed by conventional approaches to mental distress. A member of the community’s writers group, known only as John, took it upon himself to invite Leonard Cohen to play at the hospital, and seeing an opportunity to warm up for the Isle Of Wight Festival, Cohen graciously accepted.

Cohen felt right at home in Henderson. Playing for over an hour in an attic room in the tower of the hospital, before 50 or so residents and staff, he sounded positively happy. “I really wanted to say that this is the audience we have been looking for,’ he enthused at the end of this set. “I never felt so good before playing before people.”

The show was taped by charge nurse Ian Milne, and the recording now survives in the Planned Environment Therapy Archive in Cheltenham. It finds Cohen in remarkably good humour, drolly detailing the romantic despair and pharmacological derangement that was driving his art. After “You Know Who I Am” he comments, “I don’t know why, but this song seems to have something to do with some 300 acid trips I took.” Meanwhile, he explains, “One Of Us Cannot Be Wrong” was “written in the Chelsea Hotel in New York City. This was written coming off amphetamine. I was also pursuing a woman at the time, an incredibly beautiful singer in a small cafe in the Village and I was completely taken.”

It may not have seemed an obvious preparation for following Jimi Hendrix at the Isle Of Wight Festival, in front of over half a million truculent hippies in a “psychedelic concentration camp”, yet somehow it worked. Still dressed in his safari suit, unshaven and dishevelled, with the Army now referring to him as “Captain Mandrax”, Cohen took to the festival stage at 4am. Kris Kristofferson, who had been booed off a few days previously, was in awe: “He did the damnedest thing you ever saw: he charmed the beast. A lone sorrowful voice did what some of the best rockers in the world had tried for three days and failed.”

He had come and seen and conquered… But now he was “tired of the war/I want the kind of work I had before”, as he wrote in “Joan of Arc”. He very much  wanted to go back. Maybe to a cabin in Tennessee or to a whitewashed room by the Aegean Sea, a Zen temple in the San Gabriel Mountains, or just to an attic room in a psychiatric institution in Sutton.

But Cohen’s seven-year tour of duty, his own long season in Hell, was only just beginning. It led him from the devastation of the Isle Of Wight, through the concert halls of Europe and North America, via strange journeys through Israel and Ethiopia, to end up as a “broken-down nightingale”, captive in a holding cell in the Tower Of Song along with Phil Spector.

“Was it a spiritual crisis?” wonders Tony Palmer, another early fan, who watched Cohen at the Isle Of Wight, and later filmed him on the intense 1972 tour of Europe. “It was an intellectual crisis and therefore to an extent an emotional crisis. ‘Why am I doing this?’ he would ask me. I think he was becoming aware, probably for the first time, of the impact both his songs and his performance was having on an audience.”

You can read the full story of Leonard Cohen’s 1970s in the March 2021 issue of Uncut, in shops now or available online here!