“We had to rely on our Motörheadness to get us through”

The classic lineup recall the story of their mighty band 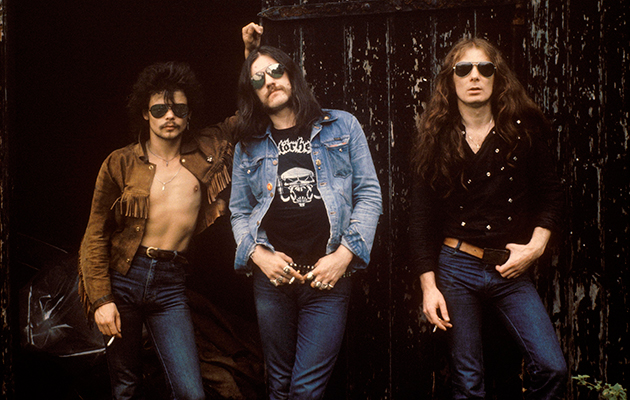 From the benign chaos of underground London emerged something new and terrifying: part punk, part hippy, and moving very fast indeed. Forty years on, LEMMY, “FAST” EDDIE CLARKE, PHIL CAMPBELL and original member LARRY WALLIS celebrate the magic of MOTÖRHEAD, recalling bad drugs, imperilled sheep, and the enduring power of their mighty “bend not stab” sound. “You’ve got to smack ’em in the mouth,” says Lemmy, “then give yourself time to get away.”Words: John Robinson. Originally published in Uncut’s May 2015 issue (Take 216).

As in guitar, so in conversation. “Fast” Eddie Clarke tells a story about joining Motörhead which covers a great deal of ground, in a very short space of time.

Eddie’s account covers his origins as TV repairman in West London, jam sessions in Ealing with someone called “American Jim”, and stints with soul singer Curtis Knight (“like James Brown – he used to fine you if you did anything wrong”). There is a band, Blue Goose, and the tale continues apace. It covers a job as site foreman on a barge renovation on the Thames at Chelsea, and meeting there a casual labourer on the site, a drummer, named Phil Taylor.

Taylor brings to the site an idiosyncratic routine: the required sandpapering, but also tales of fighting, drumming, and consumption of speed. Eventually, Phil disappears. Time mysteriously passes, but Taylor re-enters the narrative, contacting Clarke to reveal that he has now found an employment opportunity more suited to his unique portfolio of talents. “He phoned me up and said, ‘I’ve joined Motörhead’,” says Eddie.

In late 1975, Motörhead was a three-piece comprising Taylor, alongside two musicians with a rich countercultural pedigree. From the Pink Fairies, a talented guitarist and songwriter: Larry Wallis. From Hawkwind, a bass player, vocalist, and man of laconic wit: Lemmy. The band had already recorded an album called On Parole for United Artists – but it was languishing unreleased. A chance encounter with Lemmy at a rehearsal studio led Clarke to audition for a job playing second guitar in the group.

Clarke was keen. He booked the studio, at Furniture Cave in Lots Road, Fulham, drove the gear, got everyone there on time. They played – but Larry Wallis was late. When Wallis eventually arrived, things didn’t go at all well. Clarke could feel the bad atmosphere and went home. “I paid the bills and fucked off,” he says. “I thought ‘fuck it.’” He went home, and went to bed, crestfallen.

“Then Saturday morning I get a knock on the door at 8am,” says Clarke. “I thought, ‘Who the fucking hell’s this?’ So I go to the door in my fucking underpants, like, ‘What the fuck’s all this?’ And it’s Lemmy, standing there with a bullet belt in one hand and a leather jacket in the other. He gave them to me and said, ‘You got the job,’ and walked off.”