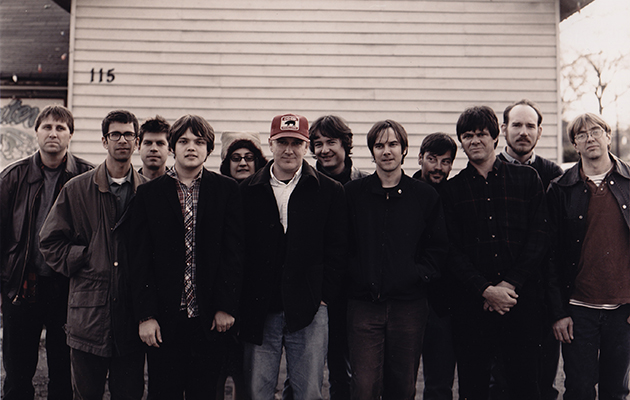 Thriller
Merge/City Slang, 1997
Just when the alt.country mantle was beginning to settle upon them, Lambchop unleash a winningly perverse career move. Eight tracks of surreal doo wop, eccentric funk, insane soul and mindlessly belligerent song titles (“Your Face My Ass”, “Your Fucking Sunny Day”). No less than three of the eight tracks are East River Pipe covers. Naturally, Lambchop name it after the biggest-selling album of all time.

Wagner: The title was certainly a jest – kind of a contrast between the most successful record of all time and the least successful. It’s an interesting record, though. Because of its recklessness, it opened a doorway to another type of sound – into another area of Tennessee, I guess. ‘Research’ is such a proper word for the music we happened to be listening to, but we realised, wow, they did make soul records in Nashville – and Memphis as well, obviously.

The East River Pipe songs also had to do with the idea of learning. These were people that we were fans of, but we developed a relationship with them because we were on the same label. The main thing was that Fred [Cornog, of East River Pipe] never tours, and never played live, and I think we started playing his songs live because it was the only way anyone would hear them. I mean, I was trying to get him just to leave the house and come down and play on them with us, but that wasn’t possible.

The size of the band had always been unwieldy. We were playing locally a lot, which didn’t require too much effort – we’d tend to open whenever friends of ours were playing in town. It only started becoming a problem when we started trying to travel.

Nixon
Merge/City Slang, 2000
Lambchop’s wandering muse ventures deep into Philly soul, Wagner’s always brittle voice acquiring new depths of vulnerability against vast, shimmering backdrops of strings. The inclusion of a Nixonian reading list on the sleeve promotes the belief that it’s an obtuse concept record about America’s 37th president; it isn’t. What it is, is a thundering masterpiece. Album Of The Year, declares Uncut, quite reasonably.

Wagner: That surprised everybody, myself included. We were just trying to make better records, and get deeper into the tradition of record-making. We’d shifted over to working with a producer called Mark Nevers. He was part of Nashville – he’d worked on so many huge mainstream country records, and was able to take this idea I’d had and make it sound like the real thing. Once again, we were drawing on the resources that surrounded us in Nashville.

The Philadelphia soul influence had occurred in the previous record, What Another Man Spills, where we actually did a cover [Curtis Mayfield’s “Give Me Your Love”]. Mark’s idea was, let’s really do it, let’s get the string arrangements in, and that broke the whole thing open, and led us making a whole album of that type. The alt.country label was always a coincidence. We were making music, we were from Nashville, we had a steel guitar in the band – there you go, they’ve gotta be country. The steel guitar was really more of a conceptual thing, just a sound that we liked. In fact, I was fascinated by it. There used to be a steel guitar store here on Lower Broadway called Sho-Bud, and I would just go down there and stand in awe, watching guys play these instruments.

The title evolved after the record. I called the friend of mine [Wayne White] who’d done the cover for Thriller, and asked what he was working on. He told me he’d been working with words, and slogans, and putting them into paintings. He read some of the titles, and Nixon rang a bell. Then I started drawing these strange connections to it, as I’m wont to do, and the reading list came out of that. People read stuff into that, but I think I was the one who read the most into it. It wasn’t at all about Nixon when I wrote it. But part of what I do – which is why so much of what I do is so inscrutable – is find these separate ideas, and put them together and try to find connections. I can draw connections between anything, given enough time – just by comparing them, you’re creating a third thing which may not even have existed. And while all that’s going on, I’ll take in whatever’s going on around me, as well – an acorn falling off a tree and hitting a car, or looking up at a picture that I’ve had for years.

Suddenly, we were playing very large venues in the UK in particular, and I was terrified. We didn’t have management. I was still working my job – I was installing hardwood floors, doing a 40-hour week. It was strange flying back from headlining the Albert Hall and going straight back to work. I didn’t make a thing about it at work, no. It’s a bit like being in the army – you don’t want to draw attention to yourself. But Nixon did put an end to the floor-laying. That and the fact that I’d turned 40. It’s a young man’s game.