Rather a long time after the event, I thought it worthwhile posting my live review of Kraftwerk at the Tate Modern (it was published in Uncut's print edition a couple of weeks ago). It was Trans Europe Express night, by the way... 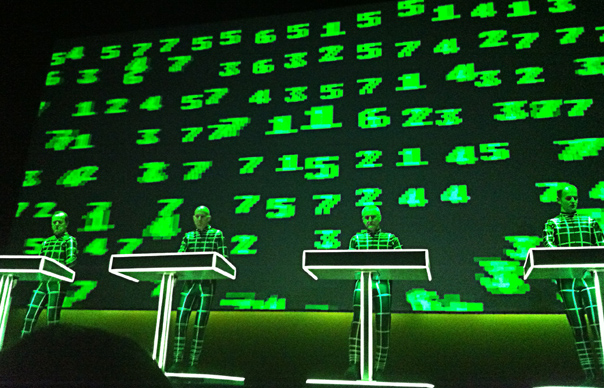 Rather a long time after the event, I thought it worthwhile posting my live review of Kraftwerk at the Tate Modern (it was published in Uncut’s print edition a couple of weeks ago). It was Trans Europe Express night, by the way…

Even by the standards of a 19th Century Grand Tour, Kraftwerk’s stately progress around the world’s salons, museums and culturally-repurposed temples of industry has become somewhat leisurely of late. Summer 2013 might see a return to the festival mainstream, but the last 12 months have found them focused on more elevated residencies, in New York’s Museum Of Modern Art, the Kunstsammlung gallery in their hometown of Dusseldorf and, now, London’s Tate Modern.

If one Kraftwerk song works as a mission statement for this campaign, it is 1977’s “Europe Endless”, a catalogue of “parks, hotels and palaces” and “elegance and decadence” which transforms a mundane touring band into refined cultural ambassadors. It captures the romance and mystique of upper-class travel before the wars, while simultaneously being an anthem of pan-European idealism: an idealism that now, like so many of Kraftwerk’s more optimistic visions of the future, feels tinged with melancholy and unfulfilled promise.

“Europe Endless” is the opening track of Trans Europe Express, notionally the album that is being showcased at tonight’s show. In the unlikely event you missed the media frenzy (as the gigs coincide with the return of My Bloody Valentine, a certain breed of music journalist have had their best week in years), Kraftwerk are fastidiously working through their back catalogue, one album at each show, over eight nights. Their first three albums, Krautrock puritans will note, have long been disowned, or at least discreetly ignored.

There are signs, though, that Ralf Hütter, Kraftwerk’s enduring father figure, is keen to subvert the formula, a little. For a man whose reputation has been built on rigorous structures, on making creative whims at least appear superseded by mechanical functionality, the decision to begin with the second half of Trans Europe Express feels mildly shocking. More surprisingly still, when “Europe Endless” is eventually performed, it is blighted by an uncharacteristic human frailty, as Hütter’s voice slips out of sync with the programmed harmonies.

Later, in the 90-minute hits selection which follows Trans Europe Express, Hütter and his three fellow operators (left to right: Henning Schmitz, Fritz Hilpert and new boy Falk Grieffenhagen) will betray a preference for 1978’s Man-Machine and 1981’s Computer World by playing virtually all of those albums. First, though, there is one rare treat from TEE: the stark tones of “The Hall Of Mirrors”, reverberating from every angle of the Tate’s Turbine Hall, as the pristine Surround Sound installation shows its worth.
One of the eerier songs in Kraftwerk’s catalogue, “The Hall Of Mirrors” marks a rare moment where sound design, including a harpsichord-like new counter-melody, is left to fend for itself without the assistance of the 3D visual extravaganza. Perhaps the lyrics – “He fell in love with the image of himself/And suddenly the picture was distorted” – would make any interpretation too crass? Grieffenhagen, the band’s video technician, merely practises a faint smirk, at once imperious and mischievous, that he seems to have inherited from Florian Schneider. Kraftwerk’s illustrious co-founder, Schneider hung up his bodysuit in 2008.

Soon enough, Grieffenhagen is back at what just about constitutes work. A relatively cursory reading of Trans Europe Express takes less than half an hour, and the 3D spectacle is under way again with a magnificent “Autobahn”. If “Europe Endless” revealed an unexpected fallibility to the man-machine, the second section of “Autobahn” feels like Kraftwerk are actually improvising, after a fashion. Henning Schmitz appears to rather forcefully tamper with the mix – there is visible exertion, involving what are plausibly knobs and faders – to create something more spontaneous and visceral than the myth of Kraftwerk would suggest.

It is mainly unclear, of course, what the quartet do for most of the two-hour show. The introduction to “Tour De France 1983” sees them theatrically joining in on their consoles one at a time, as if manually constructing the fanfare, while “Musique Non Stop” concludes with each performing a solo, of sorts, before exiting with a bow. But these flourishes feel like a quaint and sweet pantomime of musical orthodoxy, rather than evidence of a ‘live’ performance that rock fans fixated on authenticity might understand.

The thing is, while trying to unpick Kraftwerk’s secrets might be diverting, a need for verifiable, tactile proof of musicianship is totally missing the point. Over 40 years, Kraftwerk’s genius and influence has taken many forms, but none so potent as the idea that synthesized music can carry just as much emotional heft as one earnest guy with an acoustic guitar. That poignancy illuminates the likes of “Neon Lights” and “Radioactivity”, the latter partially translated into Japanese to better reflect the horrors of Fukushima. As the litany of surveillance agencies in “Computer World” implies, Kraftwerk’s attitude to progress has always been more complex, more ambivalent, than their stereotype as Tomorrow’s World pin-up boys would suggest.

Kraftwerk’s astounding musical prescience also comes to the fore on the Computer World material: “Computer Love” and, especially, “Numbers” sound more than ever like critical precursors of techno, not least because these versions have only needed marginal tweaks to update them. Again, though, it’s just as easy to hear a musical sensibility that stretches backwards as well as forwards, in the melodic grandeur that references European classical tradition as well as minimalist systems music.
Less than a thousand people are seeing Kraftwerk at each of these shows – so few that the chaos and disappointment which accompanied the tickets going on sale last December feels more comprehensible, if not excusable. The number also feels pretty surreal when one considers that the Irish indie band, Two Door Cinema Club, are playing to a crowd five times as large over in Brixton Academy on the same night that Trans Europe Express is performed.

As a consequence, Kraftwerk’s multi-media fantasia is both monumental and intimate. When the audience gasps at a 3D satellite, looming out of the backdrop during “Spacelab”, they can also see the fleeting and satisfied smile that crosses Fritz Hilpert’s generally impassive face. They can watch Ralf Hütter’s strenuously throbbing right leg during “Planet Of Visions”, and consider that even the architect of this conceptual behemoth finds it hard to keep robotic poise in the face of such compelling dance music. And they can be awed by an opulent celebration of one of pop’s greatest bands, where it’s possible to see how the human automata work up close.