Kamasi Washington on the records that changed his life

The new jazz superstar delves deep into his record collection 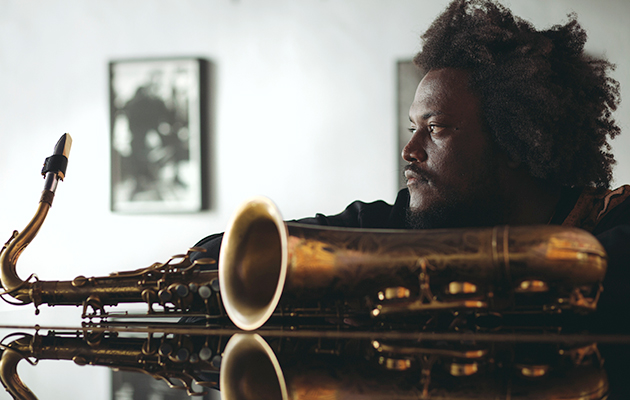 With Kamasi Washington’s superb Harmony Of Difference now in shops, I thought I’d post the interview I did with him for My Life In Music a couple of years ago. Goes without saying, some great music here.

NWA
Straight Outta Compton
There was a tape store near my house. It was called Wilson Music, or something like that, right on Western Avenue. I had to hide this from my parents! My grandmother lived in Compton, so there was that aspect to it. It really felt like it came from my neighbourhood; it felt like they were talking about something from home that made it out and big in the world. I liked the NWA film, it was astonishing to see how those records were made. Did my parents ever find the tape? Nope, they never did!

Art Blakey & The Jazz Messengers
Like Someone In Love
My parents were musicians. My dad was really into avant garde jazz: Archie Shepp, John Coltrane and Pharoah Sanders. My mum liked gospel and R&B, Chaka Khan and Whitney Houston. This was one of the first jazz records that I really got into. I was probably 11 years old. There was a song on it called “Sleeping Dancer Sleep On” that I liked, it had a lovely melody. I got Art Blakey and then I really got Art Blakey. It was like West Coast rap. It had this real, deep rhythm to it.

John Coltrane
Transition
The sax took over my life for a few years, thanks to this record. ‘Trane made Transition right before he went really avant garde. It had all this raw energy and the beginnings of a freedom. It was unlike any other record and it really showed me where I wanted to be. It’s heavy Coltrane. My dad tried to get me into this record when I was young, but it was too heavy for me. When I was about 13, I got it again, I was like, ‘Oh, my God. This is the greatest thing ever.’ All John Coltrane’s records are amazing. Ole Coltrane, Africa Blues, A Love Supreme…

James Brown
Black Caesar
I started playing with this band, the Polyester Players. It was my introduction into funk. So I went and got a James Brown record. Black Caesar is a film score, but it’s so dope. I was so into West Coast hip hop, that sound was so familiar to me – but I had never really listened to the source. I liked the arrangements on Black Caesar. Brown always had great arrangements, but on this record they were rhythmically and harmonically really cool, with the horns and everything. The Polyester Players were wild. I was 17 and playing 21 and over clubs. I had grown women talking to me, until they realized I was 17.

Ali Akbar Khan
Legacy
I took a major in ethnomusicology at UCLA. This album was my introduction to North Indian classical music. I had to transcribe some of the songs. It’s when I started learning ragas, the scales, the whole approach to music. It was hard because they play notes that aren’t represented in Western notation, so I had to create my own little notation style and adjust it so you can write it out accurately. They use quarter tones as well as half tones. It was enlightening. It gave me an insight as to what they were doing, how they were doing it, why they did what they did, the timing… It made me appreciate it even more.

Busta Rhymes
When Disaster Strikes
When I was at high school, I got into jazz and it was all I listened to. Even though I was into hip hop when I was younger, I had this period for a long time in my life when I didn’t want to listen to anything that wasn’t jazz. A friend of mine gave me this album and that brought me back to hip hop. It expanded my musical palette. It was so cool, so dope, it brought me out of my little jazz world. The cadence to his flow is really cool. The beats and his approach to production are really unique.

Igor Stravinsky
Stravinsky Conducts Stravinsky
When I was at UCLU, I added an emphasis on composition. I started studying orchestral music and writing for large ensembles. Stravinsky is my favourite composer. And on this record, hearing his music conducted by him, the way he heard it in his head, was really cool. There is an intensity to his music. His harmonic approach is very powerful. Its fun composing for big ensembles – there’s so many possibilities. It’s like adding a third or fourth dimension, you can play around so much with harmony, texture and melody. The possibilities become endless with that many instruments.

Kendrick Lamar
To Pimp A Butterfly
It’s really opened the minds of so many people, I think it’s going to lead to so many possibilities. It’s the record of my generation. It’s so lush harmonically, rhythmically, lyrically, there’s so much to absorb in every way. In popular music these days, the notion is that you have to be simple and bland to appeal to mass audiences and I think this record is anything but that. It’s going to live beyond itself. It’s not just a great record, it’s an important record. Does it inspire me? Yes, it does.