Read the full transcript from the Uncut cover feature here 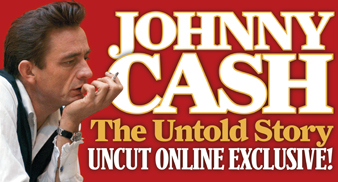 In last month’s issue of Uncut , we brought you the inside story on the House Of Johny Cash. We spoke to his family, friends and collaborators to tell the definitive story of the Man In Black. Over the next few weeks on uncut.co.uk, we’ll be printing the complete transcripts of these interviews.

And here’s the third transcript from the feature: JOHN CARTER CASH – Fellow musican, associate producer of the American Recordings series and only son of Johnny and June

For previous interviews with Rodney Crowell and Nick Cave. Click on the links in the side panel on the right.

UNCUT: What do you identify as the difference between Johnny Cash, your father, and Johnny Cash, the peformer?

JOHN CARTER CASH: Well, my father definitely put on a stage person. My father was a unique man, but he had a shyness about him. It’s very much true that Cash onstage and the man at home, or the buddy at home that took me fishing, they were two distinct, different people. But they were elements of both of those in his personality all the time. But it wasn’t like he was multiple personalities, but it’s true that there were times when he was in his addiction, that it seemed like he might have been. But he himself in his autobiography wrote about Cash and JR. Cash was, basically, more selfishly oriented, more of an addictive personality. JR was just a good old boy who liked to laugh and have fun. So they were sort different people in some ways. But also, now that my father has passed on, it’s just as apparent that Johnny Cash hasn’t. He’s just as much alive, in the hearts of the fans, and in the music, as he was when the man was alive. So there is a sort of separation in my heart there, that I have to make, because, I’m in contact with Johnny Cash, the figure, the image, every day, but my dad’s gone. I have to make the separation.

Was there a time in your life where that was difficult, and were you ever jealous of the public taking hold of your dad?

I don’t know if I was so much jealous of the public taking hold of him, because I saw the separation, and I knew it from early on. But I did have some real struggles inside, with myself and who I was, as the child of a performer. As the child of a public figure. Defining my own identity was a journey, and at times definitely a struggle.

When first aware that he was a singer?

Oh gosh, I knew that from early. I knew from the moment that I could open my eyes probably because he… they took me on national television when I was an infant. They put me on stage. In almost every show from when I was small, from the moment I could walk they’d bring me out so I could take a bow. It was just part of my life every day.

Obv when you’re young, that seems natural and you don’t question it. Does there come a point where you think, hang on, what is this?

Yeah. Later on I realised for one that it was not necessarily par for the course for the rest of the world. It was a unique reality, but it was definitely a journey.

Have you had time to work out was special gift was?

My father’s special gift? I think for one it was his gentleness. The way that he could offer a heart in any given situation. There were many special gifts: one being his ability to fit in at the supermarket, or the coffee shop, or with the president of the United States, or foreign dignitaries. He wasn’t so much a chameleon as he was just magically accepted into the hearts of so many from different walks of life. There’s a lot there.

Rodney Crowell said that he was an elevated common man.

Yeah, through all that hard work, certainly. But the world around him also elevated him. They saw the magic within him. But he was. He was a gentle hearted common man. And he had many dear friends in different walks of life.

People talk a lot about his struggle against pain. Do you think that’s a key thing?

I think my dad’s greatest pain was interior pain. It was partially the way that he was made, and partially the pain of addiction, and the loss of his brother when he was younger. These struggles in life were probably his greatest. But in the last 10-12 years of his life, physical pain took over. And you don’t triumph over physical pain, but I’d say that, as much as my father, as a man, possibly could, he accepted it as his own. He had chronic nerve damage in his jaws, every day of his life he dealt with some sort of physical pain, and for the last ten years, he was an abusive addict for the most part, maybe the last five years. And we have a period in there where there were struggles. But he reached a plateau of understanding and spirituality that he carried with him until the end. Not that he every stopped using these substances, but something happened within his spirit that made things different. And that is part of how crossed that pain, how he carried it, and accepted it.

It’s interesting how frank people have been about the drug abuse in those later years, because that wasn’t so public before.

Well you know, it was through the course of his life. And that… I mean, there’s an image that my mother saved my father in 1968 and everything was a bed of roses and everything was fine after that. And that just wasn’t true. There were as many struggles in the 1980s and the 1990s as there were in the 1960s. they were just different drugs. But my father always went back to what was true. He went back to what was true, and he would turn his suffering around. I believe he learned from his lessons. But the very nature of addiction is that the addict is incorrigible. And my dad dealt with it all his life.

Someone said that he wanted to retire in the early 90s – that he’d had enough.

I don’t know. I never heard the word retire. I always heard my dad talk about playing music right through till the end. He may have talked in the early 90s about how he was ready to get off the road. But retirement, for my dad wasn’t part of his make-up. When he stopped playing music on the road he immediately began to work in the studio even more. And when he did retire in 97 he turned his focus into creativity, in the studio, in front of the microphone, with all the energy that he expended before when he was on the road. He never retired. Right before my dad died he was planning to go to New York City for the video music awards that he was nominated for, the MTV music awards. You couldn’t tell him he wasn’t going to go. It was going to happen. But he wound up having to check into the hospital there, and not too long later he died. But his spirit never gave up – his body did.

Nick Cave said he was very sick the day he recorded with him.

That was the typical day in the studio. I was there for that whole period in the studio. And to an outsider coming in you would see this sick man. When my father recorded most of the vocal for American V there were times when he would be in the hospital with pneumonia, I’d be sitting there talking to him, he could barely breathe, but he’d say “I want to go to the studio today.” He would literally fight the pneumonia out of his lungs and get in the studio and record, the next week. It happened over and over. And he’d still be very sick when he was in the studio. That’s that constitution – unstoppable nature. He just kept going. And you listen to most of those American Recordings, for IV and V, and on the upcoming VI, and that will be evident. But much more noticeable, and more beautiful… more apparent will be the fire of his nature.

Nick Cave said he couldn’t speak and he had to pray to get his voice back, but watching him as he sang it was like that was what he was made for.

Yeah. Exactly. He was made for it. he did it. He always would.

Some people question that Rick Rubin period – was it definitely good for him?

Oh yeah. He re-established his identity in the public eye. He came into his own creatively again once again. He reclaimed his space in music within his own spirit. And there was a great relationship between he and Rick. Rick is very open-minded about spiritual matters, they communed over prayer on a regular basis, over the phone usually. They were very close. So Rick’s support for my dad, both creatively and in the music world, and as a friend, were invaluable.

What does it mean to you when you see the video for “Hurt”?

It floors me every time. Its heavy. Well, my dad said it himself. My sister Cindy watched it and said “Dad, hey, this looks like you’re saying goodbye.” And he said, “Well, I am.” But he was like a kid about it. He like, “Check out the video!” He was – he wasn’t mournful or staring off in the distance. He was like: “Oh boy! This is gonna be huge!” Yeah, he loved it. He set it in motion. He knew the drama of it, but he knew the beauty and the honesty of it. He just said, I’m cool. The rest of the family was like, this is heavy dad, this is dark. All of us, you know, crying. And dad with a twinkle in his eye.

Did your friendship get stronger at the end?

It modified. It changed. We went through a lot of struggles. But there towards the end it was very strong.