James Murphy and Shut Up And Play The Hits

I interviewed James Murphy in late 2006, for a preview piece about The Sound Of Silver, the second album by his band, LCD Soundsystem. 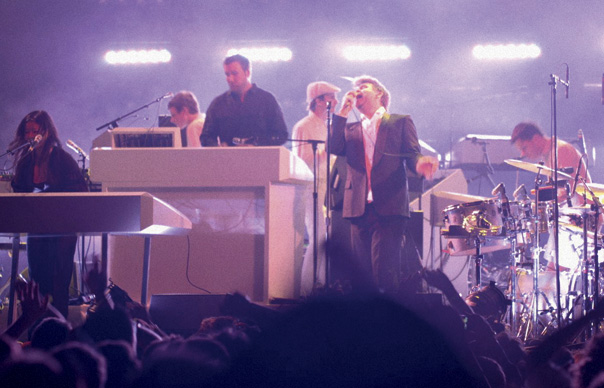 I interviewed James Murphy in late 2006, for a preview piece about The Sound Of Silver, the second album by his band, LCD Soundsystem.

What was originally intended to be a brisk, 10 minute interview ended up spilling out over the half hour mark. James was, to put it mildly, chatty. At one point, we talked about the track “All My Friends“, which I mentioned we’d thought sounded rather like Steve Reich jamming with New Order, if such a thing was possible. James paused for a minute, then said, “Sure, but let’s imagine what Steve Reich jamming with New Order would actually sound like…” And he was off, into another superbly entertaining digression.

LCD Soundsystem have been Murphy’s creative outlet for the last 10 years. A fabulous opportunity for a latecomer to work out all his theories and obsessions about music. Murphy called time on LCD Soundsystem in April last year, with a show at New York’s Madison Square Garden. Shut Up And Play The Hits is partly a record of that show, but also a what happens next for a “moderately successful rocker” who suddenly finds himself with a lot of time on his hands to ponder his decision to fold his band.

In the days following the Madison Square Garden show, we see Murphy shuffle around his apartment in his pyjamas, shave, make coffee, walk his dog, travel on the subway, visit his manager – Keith Wood, an expat with a Professor Yaffle-ish demeanor and a dry, English wit. There are, literally, hours to fill. Now all the chat show banter about “walking away form rock” is done and the final gigs played, this is Murphy’s quiet comedown. Will Lovelace and Dylan Southern’s film becomes a portrait of a man who has successfully liberated himself from his career but is without any clear plan of what to do next.

Murphy displays his great ability to talk: filmed being interviewed by New York-based writer Chuck Klosterman, he is smart and self-aware. He says he called time on LCD Soundsystem because “I want to have a life.” Now 42, Murphy formed the band when he was 31 – an age when many musicians are already managing a career in decline. Watching the amiably rumpled Murphy endlessly dissect the nature of fame, and his decision to walk away form it, makes me think of a hipster Larry David, mulling over his post-Seinfeld career options. A sitcom featuring Murphy and Keith Wood, it must be said, wouldn’t be the worst idea anyone’s ever had.

You can read Stephen Trousse’s interview with James Murphy in the current issue of Uncut; Shut Up And Play The Hits is released on DVD and Blu-ray on October 8 by Pulse Films