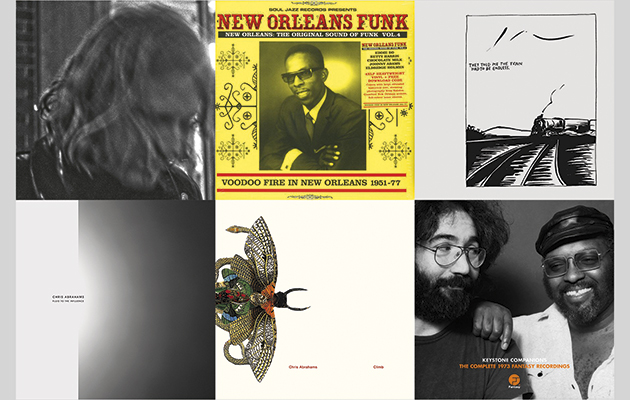 Hopefully Uncut’s 101 Weirdest Records list is giving you some musical stimulation in these strange days. In case you’ve missed it thus far, you can find all the info on our weird extravaganza and the latest issue of Uncut here. Also, please get in touch and let us know your nominations for off-piste selections we may have missed: send your personal weird favourites to our letters page via uncut_feedback@timeinc.com.

Today has been mostly dominated by racking up old Can albums into one continuous stream to celebrate the relentless genius of Jaki Liebezeit. I know mantric and improvisatory sound like opposites, but that’s what I hear when I listen to how Liebezeit drove his band with the most inventively repetitive, funky backbeat.

Before that, though, here are some of the reissues and new records I’ve been playing a fair bit, starting with Ty Segall’s “Ty Segall” on Drag City. If anyone else found Segall’s 2016 album, “Emotional Mugger”, something of a Devo-infatuated misstep, the garage rock maven’s second self-titled album is a reassuring retrenchment, of sorts. As with 2012’s “Slaughterhouse”, the vibe often suggests The Beatles turning up on Sub Pop in the late ‘80s (cf “Break A Guitar”), though Segall’s Lennon/McCartney channelling appears to have moved on a few years, from beat boom ramalam to White Album baroque. In this, he’s helped by an expanded band, with faithful retainers Mikal Cronin and Charles Moothart augmented by Chicago multi-disciplinarians Emmett “Cairo Gang” Kelly and Ben Boye. Pleasingly, Segall’s root wildness is enhanced rather than diffused by their jamming virtuosity: witness “Warm Hands (Freedom Returned)”, which mutates over ten minutes from slashing grunge to a jazz-tinged freakout, distant cousin to the sort of thing keyboardist Boye has indulged in with Ryley Walker.

On the CD with the latest Uncut, you’ll find an extract from the brand new album by the Necks, “Unfold”, which is great. But fans of their involving, meditative jazz trio jams shouldn’t sleep on “Climb”, a recent solo set by their pianist Chris Abrahams. Abrahams’ early 2016 effort was a frictional, often atonal electronica album called “Fluid To The Influence”. “Climb”, though (his tenth solo endeavour), is a more reassuring beast, focused entirely on the sort of ravishing piano flurries that figure most prominently in his work with The Necks. It’s often tempting to see Abrahams as a Reichian minimalist, operating in an improvised music world. But the likes of “Roller” privilege a lyricism and romantic spirit that recalls Debussy as much as it does Bill Evans.

Possibly just me, but it’s tempting to imagine a record called “The Feudal Spirit” as some kind of PG Wodehouse concept album (even if it does turn up on a label uncomfortably called Poon Village). In fact, Rob Noyes’ “Feudal Spirit” is the latest dispatch from the American Primitive school of guitar-playing. As usual, “Primitive” seems a chronically inaccurate word: Noyes, from Massachusetts, is an acoustic guitarist whose take on folk traditions is delivered with a certain frenzied complexity. On the dextrously overdriven likes of “Paydirt”, The Feudal Spirit shapes up as one of those unvarnished solo 12-string records where you could occasionally be forgiven for thinking there are a couple of instruments duking it out in the mix. Prettiness abounds (cf “Further Off”), but Noyes is scrappy more often than meditative, closest perhaps to Peter Walker from the original Takoma generation. Neat Raymond Pettibon sleeve, too.

Few series have given me as much pleasure in recent years as Soul Jazz’s “New Orleans Funk” comps and, thanks to the Crescent City’s preposterous embarrassment of musical riches, there’s no drop in quality as this exceptional anthology series hits Volume 4. As is the way with Soul Jazz, the tracklisting is a nuanced mix of hits and obscurities, with a standby like Dave Bartholomew’s loping “The Monkey Speaks His Mind” (1957) (how hasn’t that one figured earlier?) sitting alongside rarer sides like Gus ‘The Groove’ Lewis’ kinetic take on JBs funk, “Let The Groove Move You” (1967).

The subtitle this time is “Voodoo Fire In New Orleans”, which seems pretty arbitrary: rather, Volume 4 strives to show the sheer range of what constitutes the city’s sound. Hence there’s room for James Waynes’ first, high-stepping 1951 version of the foundational “Junco Partner” (covered by James Booker, The Clash, and all points in between), as well as squelching 1975 electro-funk from Chocolate Milk, the octet who replaced The Meters as Allen Toussaint’s house band. Pushed for a highlight, though, it might just be Clifton Chenier & His Red Hot Louisiana Band’s “Party Down” (1977), as the accordionist takes his zydeco sound uptown; the sax break is a thing of wonder, all by itself. It is Gus Lewis who provides a suitable mission statement for the whole magnificent compilation: “Can you dig my band, baby?”

My knowledge of Jerry Garcia’s extra-Dead activities is a bit sketchy, to be honest, but I have been digging the 6LP set from Garcia and Merl Saunders, “Keystone Companions: The Complete 1973 Fantasy Recordings”. Of the many myths of Garcia, the most compelling might just be the one about his overwhelming compunction to play guitar more or less all the time. “The Complete 1973 Fantasy Recordings” is fluent testimony to a man in love with making music, catching Garcia filling in the nights between Grateful Dead obligations at the Keystone club in Berkeley. His chief foil is Saunders, a Hammond player who gives as good as he gets in these spectacularly amiable sessions, the bulk of which surfaced on a couple of live albums in 1973 and 1988.

Noodle sceptics may take a wide berth, but the 24 tracks here often sound as close to the MGs or the Meters, kicking back, as they do the Dead: check two stabs at “Keepers”, written by Saunders and bassist John Kahn. Garcia doesn’t bring any of his own songs to the party, but his gifts as an interpreter have rarely been better showcased, riffing effortlessly through “I Second That Emotion”, “My Funny Valentine”, “Mystery Train” and a couple of Dylan covers (“It Takes A Lot To Laugh…” and “Positively 4th Street”). A great showcase, too, for Garcia’s perpetually underrated vocals: his take on “The Harder They Come” is a tender triumph.