The making of The Style Council’s “Walls Come Tumbling Down!” 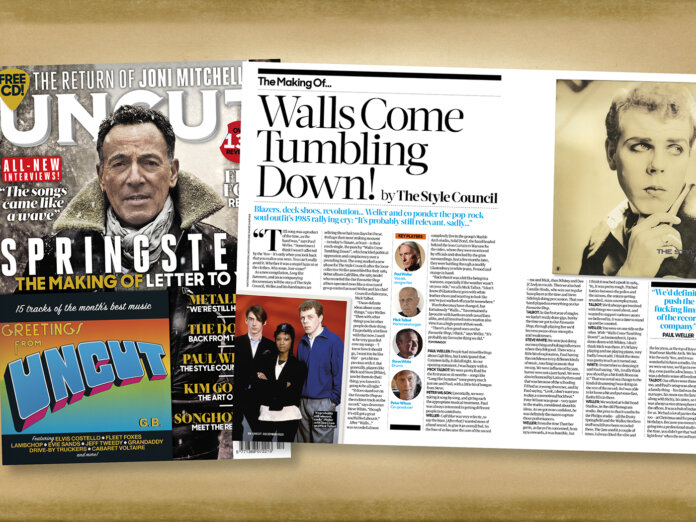 As a new compilation and an accompanying documentary tell the story of The Style Council, Paul Weller and his bandmates relive those halcyon days in the latest issue of Uncut – in shops now or available to buy online by clicking here. Perhaps their most striking moment – in today’s climate, at least – is their ninth single, the punchy “Walls Come Tumbling Down!”, which tackled political oppression and complacency over a pounding beat.

“The song was a product of the time, as the band was,” says Weller. “Sometimes I think I wasn’t affected by the ’80s – it’s only when you look back that you realise you were. You can’t really avoid it. Whether it was a stupid haircut or the clothes. Win some, lose some!”

The song marked a new phase for The Style Council: after the loose collective Weller assembled for their 1984 debut album Café Bleu, the 1985 model who recorded the Our Favourite Shop album operated more like a structured group centred around Weller and his chief Council collaborator, Mick Talbot. “I have definite ideas about some things,” says Weller. “Then with other things you let other people do their thing. I’m probably a lot freer with that now. I used to be very guarded over my songs – ‘I know how it should go, I want it to be like this’ – get a bit too precious with it. But generally, players like Mick and Steve [White], you let them do their thing; you know it’s going to be all right.”

“It does stand out on Our Favourite Shop as the rockiest track on the record,” says drummer Steve White, “though it’s still got a great soulful feel about it.”

After “Walls…” was recorded almost completely live in the group’s Marble Arch studio, Solid Bond, the band headed behind the Iron Curtain to Warsaw for the video, where they were monitored by officials and shocked by the grim surroundings. Just a few months later, they were battling through a muddy Glastonbury in white jeans, Pernod and orange in hand.

“Back then it was a bit like being in a warzone, especially if the weather wasn’t on your side,” recalls Mick Talbot. “I don’t know if Glastonbury goes with white leather shoes and wanting to look like you’ve just walked off a yacht somewhere.”

Wardrobes may have changed, but fortuitously “Walls…” has remained a favourite with hardcore and casual fans alike, and all involved in its creation also view it as a high-point of their work. “There’s a few good ones on Our Favourite Shop, I think,” says Weller. “It’s probably my favourite thing we did.”

You can read the full article about the making of “Walls Come Tumbling Down!” in the latest issue of Uncut, out now with Bruce Springsteen on the cover.