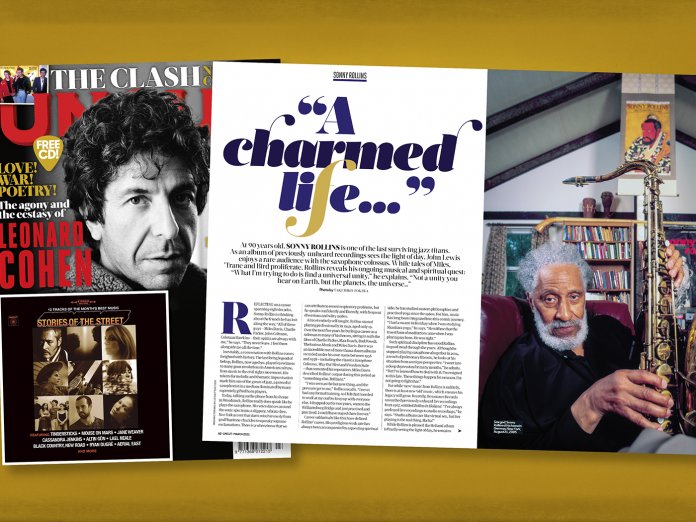 The current issue of Uncut – in shops now or available to buy online here, with no delivery charge to UK addresses – features a rare interview with 90-year-old saxophone colossus Sonny Rollins. In the extract below, the last living legend of bebop discusses the 52nd Street jazz scene, his stint in Rikers Island prison for armed robbery, and how Charlie Parker helped him kick heroin…

You were born in Harlem in 1930, during what was known as the Harlem Renaissance. What kind of place was it in your childhood?
It was an extraordinary environment. We were surrounded by giants of the black community. You know the writer WEB Du Bois? He lived on our block. Slightly more expensive digs than my family, but literally on the same block. There were other key people in the civil rights movement. Paul Robeson, Duke Ellington, Coleman Hawkins, Don Redman. All pillars of the black community; they lived in our neighbourhood. Sugar Hill was our Park Avenue. We used to see Coleman Hawkins going to the store to buy groceries. Or Roy Eldridge. It was incredibly inspiring.

Going to Greenwich Village or 52nd Street must have seemed like a different planet.
It was somewhat of a world away. I started going to clubs on 52nd Street in my late teens. These were small clubs. You had to look old enough to get in there, otherwise they’d lose their licence. So I had to put black makeup around my lips to make out I had a moustache! I don’t know if I fooled anybody, but the proprietors let us in anyway. It was when I met Coleman Hawkins in person – and Charlie Parker and Billie Holiday. If you hung out on 52nd Street for a few hours, they were all on that street. Art Tatum. Erroll Garner. Count Basie’s orchestra. It was fantastic.

What was the atmosphere like at one of these jazz clubs in the early 1950s?
These clubs were wonderful. It was a panorama, a pageantry, looking back at it – all the people who came to listen to great music. The audience was there to listen. That’s the thing with live music – everybody has a role, even the audience. The guy nodding his head, the girl who’s smiling, the sceptic who’s not impressed – they all make you play better. I was just getting old enough to play on 52nd Street when 52nd Street was in its decline. Then Birdland started – that was like the last of the 52nd Street clubs.

How close was the link between jazz and the civil rights movement?
The saxophonist James Moody, who was one of the many black musicians who served in the US Army during the war, remembers being transported with German prisoners of war who were being treated better than him. All these black soldiers who fought in the war, they didn’t want to come back and be treated like second-class citizens. Jazz musicians were important for black people. Charlie Parker represented a different kind of mentality for jazz musicians. Until that point, jazz musicians had to be entertainers as well as artists. You had to be a song-and-dance man as well as a musician. But Charlie Parker was the opposite. He didn’t dance or sing. He stood up straight. He was playing great music; people had to accept it and applaud him, therefore they had to accept black musicians as equal. Times were moving on.

You served 10 months at Rikers Island prison in 1950 for armed robbery. What do you remember about Rikers?
In retrospect, it was the first of my sabbaticals! Unlike the others, it wasn’t self-imposed. But it was a learning place. There was a priest in the prison – I can’t recall what denomination – who tried to give the prisoners some kind of musical outlet. So I got involved. There were some very fine musicians in Rikers, like Elmo Hope, the pianist. The prison was a brutal place, but fortunately I was involved in the music, and I largely avoided the brutality. In Eastern religions they say that people who play music are conferred with a special dispensation. Their lives are different to other people’s. Yes, we can live a charmed life, in many ways.

Your friend Jackie McLean talks about heroin descending over the jazz scene like a tidal wave in the 1950s. How do you think this happened?
The first heroin user I met in the jazz world was Billie Holiday. She was married to a trumpet player, Joe Guy. I recently learned that he was a heroin addict, and he turned Billie onto it. I was getting out of high school. We were smoking pot. But heroin was another step. Billie Holiday did it and then Charlie Parker was known to use it. We’d say, “Man, Charlie Parker uses drugs. If you want to play like him, you gotta do it too!” Some of us fell into that trap. Myself included. It was quite a devastating trip. I was fortunate to have emerged from it alive, thanks to Charlie himself.

How did Charlie Parker help you kick heroin?
He didn’t want to see his young followers doing it. He considered himself too far gone. That’s what hastened the end of his life. When he found out that I was using drugs, he was heartbroken. When I saw how upset he was I thought, ‘Wow, I’m killing Charlie Parker.’ So that got me to finally go to different places. I went into rehab, early 1955. Got myself straight. It’s not easy. It was one of the positive things in my life.

You can read much more from Sonny Rollins in the March 2021 issue of Uncut, out now with Leonard Cohen on the cover and available to buy direct from us here.