She discusses her past, present and future in a new Uncut interview 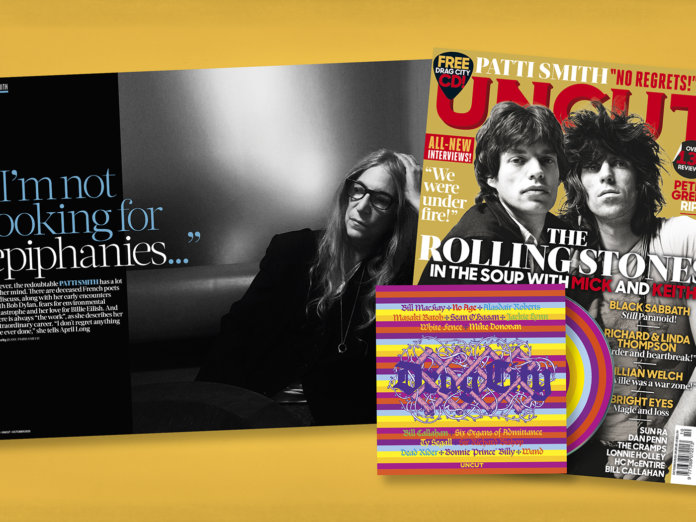 The new issue of Uncut – in shops now and available to order online by clicking here – includes a brand-new interview with the redoubtable Patti Smith. She’s poised to release Peradam, the third instalment of her collaborative trilogy with Soundwalk Collective, based on René Daumal’s 1940s metaphysical-quest novel, Mount Analogue. But she also takes April Long back to the beginning of her extraordinary career, and hints at what’s next…

When you look back at yourself, at the beginning of your career, what do you see?
Well, I was young and inexperienced. I didn’t even know how to use a mic. I look at myself then like you would look at a kid who makes you smile, but you have to admire their bravado. I don’t know where that bravado came from, as I could see all my flaws. I always said we were a flawed band. I was a flawed singer. I was not particularly gifted, but I did have guts. It’s ridiculous to judge your young self. I know that everything I did, no matter how questionable it was or how many people I might have offended along the way, it was to try to open territory, to open things up for new generations.

Any regrets?
I don’t regret anything I’ve ever done. I wish I would have been more attentive to my mother sometimes. We all have private regrets, but as an artist, I always did the best I could.

How are you different now?
I’m 73 years old. I don’t have the moves or the energy or the irreverence I had when I was young, but if people give me a bunch of shit, I can still play mean feedback with my guitar. I’d just as soon put my foot through an amp if they gave me a lot of trouble. In some ways, there’s a seed of the young punk rocker in me, but there’s also all the things I’ve learned as a human being. I’ve evolved. I’ve raised children. I wed, I loved my husband and I became a widow. I’ve seen a lot of beautiful things and a lot of sorrow. I’m just happy to be alive and still working.

Would you have liked to be a hit-maker?
I would love to be someone who could do that, yeah. You look at somebody like Michael Stipe, a great poet who also knows how to strike that pop chord. I admire that. Whether it’s Marvin Gaye or Bob Dylan or John Lennon or PJ Harvey – these people who can infuse a certain poetic element into a popular song. I love pop music. I like the same songs everybody else likes. I like Adele, I like Rihanna, I like Billie Eilish. I loved R&B songs when I was young. I loved Amy Winehouse. But for myself, I gravitate toward a different kind of expression.

It’s been eight years since Banga. Would you like to make another more conventional ‘rock’ album?
I am writing some lyrics and things for Stephan [Crasneanscki, of Soundwalk Collective] now that I’m going to surprise him with. We’ve stockpiled quite a bit of recordings, and our next project is all going to be our own work. We have several things we’re working on simultaneously, my work and his work. We’ve already started that in that studio in Paris. I’ve done monologues, 14, 15 minutes long. I can’t tell you anything more, but we have beautiful work coming.

You can read much more from Patti Smith in the October 2020 issue of Uncut, out now with the Rolling Stones on the cover.