Matt Berninger: “I’d love to be able to rebrand myself, but I can’t” 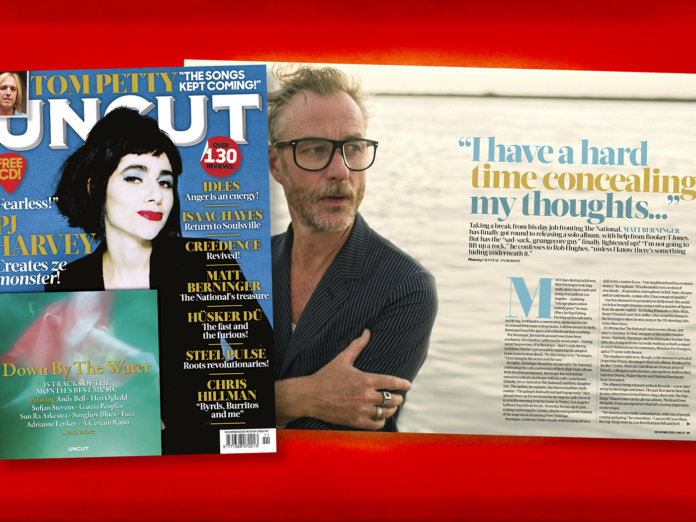 The current issue of Uncut – in shops now or available to buy online by clicking here – features a candid interview with The National frontman Matt Berninger, who has finally got round to releasing a solo album, Serpentine Prison, with help from Booker T Jones. In this extract, Rob Hughes attempts to discover if the “sad-sack, grungecore guy” has finally lightened up…

For years, Berninger had been stockpiling old songs he wanted to cover. The list was up near 450. He met up with Jones at Earthstar studio, in Venice Beach, and started work. Some covers were successful – The Velvet Underground’s “European Son”, Morphine’s “In Spite Of Me”, the Bettye Swann-affiliated “Then You Can Tell Me Goodbye”. Others, like The Cure’s “In Between Days” or the Beastie Boys’ “Sabotage”, less so. The project changed complexion when Berninger offered up demos of two of his own creations: the balletic “Distant Axis” and the spare, imagistic “Serpentine Prison” – named after a sewer pipe that feeds into the ocean near LAX.

“After he heard those original sketches, Booker very quickly asked, ‘What else is there?’” Berninger recalls. “I’d been writing a lot of songs with different people – friends from my first band, friends from my favourite band, The Walkmen, friends from The National – and Booker helped me cherry-pick. It was a really fast-moving thing and it became pretty clear that doing all originals was going to be more interesting for both of us.”

Various co-writers and musicians were summoned to Los Angeles to add meat to Berninger’s skeletal songs, the sessions racing by in a fortnight. Scott Devendorf flew in from New York. He believes that recording solo has been a tonic for Berninger. “The fact that it’s a very collaborative record was very exciting for him,” he says. “I also think it’s about trying to expand his own vocabulary, musically, to do something different as a songwriter, away from The National. It’s been refreshing for Matt to do that.”

In many ways, Serpentine Prison feels like a natural successor to I Am Easy To Find, which saw The National expand into fresh territory with help from outside forces. Based around the short film of the same name, directed by Mike Mills, the album charted a woman’s journey through life. Berninger shared vocals with a host of female guests – Sharon Van Etten, Gail Ann Dorsey and Kate Stables among them – while Mills stayed on to co-produce. Carin Besser co-wrote the lyrics.

“The National had never made a record like that before,” says Berninger. “I Am Easy To Find was 100 per cent a concept album and the film was such a big part of that.” Serpentine Prison was forged from the same collaborative spirit. Crucially too, just as Mills had helped bring new texture and colour to The National’s palette, so Jones does with Serpentine Prison.

“He was very open to a large number of people and their input, and he let me have a lot of control,” says Jones of the recording process. “But this is Matt’s album, it’s his baby. It all came through him. He’s highly prolific and creative. And I think it’s actually a struggle for him to control that. He’s always got ideas. So it’s a matter of bouncing them off other people.”

The songs on Serpentine Prison suggest that Berninger is trying to stop himself from falling apart. His characters are routinely stranded or helpless or misunderstood – sometimes all three simultaneously – craving love and companionship, or at least some kind of purpose. These hang-ups are familiar tropes of Berninger’s, though here they’re refracted through people and places he’s known.

“I’ve been trying to shake that label off of myself – the sad-sack, grungecore guy, whatever it is,” he laughs. “I’d love to be able to rebrand myself, but I can’t. I laugh because I always try to, but it never works out that way. Everybody’s like, ‘There he is again!’”

You can read much more from Matt Berninger in the November 2020 issue of Uncut, out now with PJ Harvey on the cover.