From Greenwich Village to LA’s Troubadour and beyond, Jackson Browne has always written songs about love, hope and defiance – but with his new album Downhill From Everywhere these themes have taken on a bold, new urgency 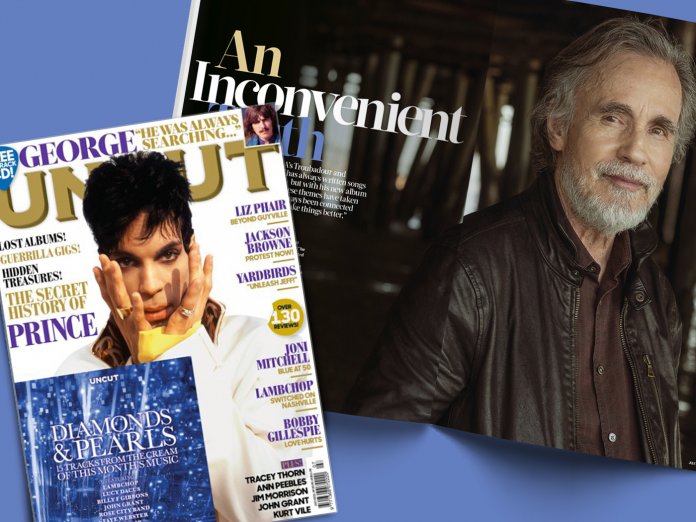 Jackson Browne hasn’t had much sleep. “Last night I was playing until three in the morning,” he explains, via Zoom, from the tastefully appointed kitchen that adjoins his home studio in Los Angeles.

“I’ve been working on a song for a movie and you have to sort of chase it where it goes. It’s so great, because I’ve got this place where I can come at all hours. It’s next to my writing room, where I have a mattress.”

The convenience of having his own studio, for a perfectionist like Browne, also means there’s a temptation to meddle. Downhill From Everywhere, his new album, should have been out earlier this year, but he heard a few things on the test pressing that he didn’t like. “So I bought myself the time to do some little changes and experimenting,” he says. “That’s happened over the years, but there’s always that moment where you finally have to let go.”

We’re primarily here to talk about the album, which is as insightful, melodic and artfully measured as anything Browne has put his name to in the past 25 years. But the course of our two-hour conversation follows all manner of digressions and tangents, from the people he’s known –Tim Buckley, Nico, Warren Zevon, the Eagles, Lowell George and more – to activism, legacy, songwriting as therapy and starting out solo. He even calls back a couple of weeks later, to clarify something he feels may have been open to misinterpretation first time around.

At 72, a bewhiskered Browne, in dark shades, suits the elegantly weathered look. Talk of his pre-fame days in Greenwich Village elicits a memory of Harry Smith’s ubiquitous Anthology Of American Folk Music. “As a matter of fact,” he muses, “the older I get the more I look like Harry Smith. You know that picture where he’s mixing vodka and milk because he has an ulcer? He looks so funky, he hasn’t shaved, his hair’s thinning. He comes to mind from time to time, whenever I look at myself in the mirror.”

Grey hair notwithstanding, Browne doesn’t look a whole lot different from the boyish figure who first rose to prominence in Southern California in the early ’70s. He was then at the nexus of what Linda Ronstadt called “an artistic Shangri-La”, the eloquent new generation of singer-songwriters who coalesced around the Troubadour in LA. Literate and sophisticated, Browne’s friends and admirers included the Eagles, who aspired to the same level of insight as timeless landmarks like For Everyman, Late For The Sky and The Pretender.

Much of those same qualities are still evident on Downhill From Everywhere, which finds Browne transitioning further into the themes he’s pursued over the years: the intangibles of romantic love, despair, hope, political division, environmental issues, memory, the flow of time. Some songs rock hard, others tap into euphonic balladry and temperate folk-soul. There’s even a detour into Catalan rumba. “I have a band of players that I call on regularly and I really like what we ended up with on this record,” he says. “We really went through it together.”