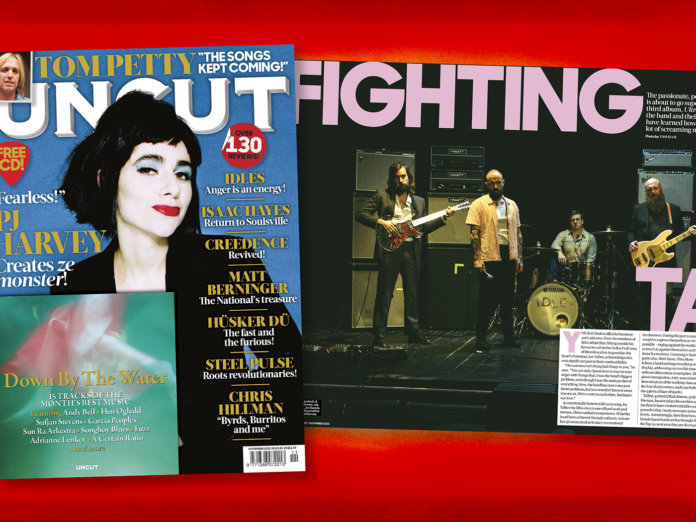 Idles’ highly anticipated new album Ultra Mono is now in shops – and so is the latest issue of Uncut, in which the band talk with typical candour about the making of their big statement record and their compelling journey up to this point. You can also order a copy of the magazine online by clicking here. In the meantime, here’s a taster of Michael Hann’s eye-opening encounter with the Bristol bruisers:

The principal recording for Ultra Mono took place in just eight days, at La Frette Studios, an hour north of Paris, a favoured location of Nick Launay and his co-producer Adam “Atom” Greenspan. “I got an email from Nick, saying he was at La Frette, and I should come and have a listen to what they were doing,” says Warren Ellis, who lives in Paris. He walked in while Launay and the band were having lunch, to Idles’ astonishment (frontman Joe Talbot idolises the Bad Seeds). And so he was pressed into action for what he describes, laughingly, as “one of the more challenging things I’ve had to do in a studio”.

“Joe turned to me and said, ‘I’d really like to have some backing vocals like Malcolm Young. And seeing as you’re Australian, you can do grunts, like on [AC/DC’s] “TNT”.’ The thing I like about Idles that I saw in the studio is that they’re very much a group, and there’s power and strength in a group. They see the potential in that, and that’s an unusual trait these days. It was really great to see their love for being in a band.”

Former Jesus Lizard frontman David Yow, another guest, recorded his contributions from Los Angeles. “They played a show at the Fonda theatre in LA [in May 2019] and I wanted to go but it was sold out,” says Yow. “I got in touch on Facebook and they got me in. Next thing you know, we’re pals. They were phenomenal that night. I was so impressed something that aggressive could be that caring and loving and almost spiritual. They’re so positive. You get a warm feeling watching those guys, because they give a fuck. They’re the fuck givers.”

Ultra Mono feels like the culmination of work that began with 2017’s Brutalism – the end of phase one in Idles’ story, if you will. “I asked myself, ‘Are we really representing our sense of unity and community?’” says Talbot. “So I looked at hip-hop, Wagner, techno. Normally, there’s only one or two things going on in those songs at the same time. So once you get rid of all the noise frequencies, you can turn it up. Five egos playing different things at the same time is noise. But all of you playing the same thing at the same time is volume and power and unity.”

“When we started, we were told no-one is going to be interested in guitars,” says guitarist Mark Bowen. “They said, ‘It’s never going to be popular – too loud, too aggressive.’ But with the polarised politics and the increased inequality – the ageism and racism and sexism and the shit that makes you feel isolated – people are searching for community and catharsis. And Idles are my community.”

“It took a long time and a lot of screaming matches to get it right,” Talbot says. “But we’re there. We are there. And we’ll keep on going as long as the music allows it.”

You can read much more from Idles in the November 2020 issue of Uncut, out now with PJ Harvey on the cover.