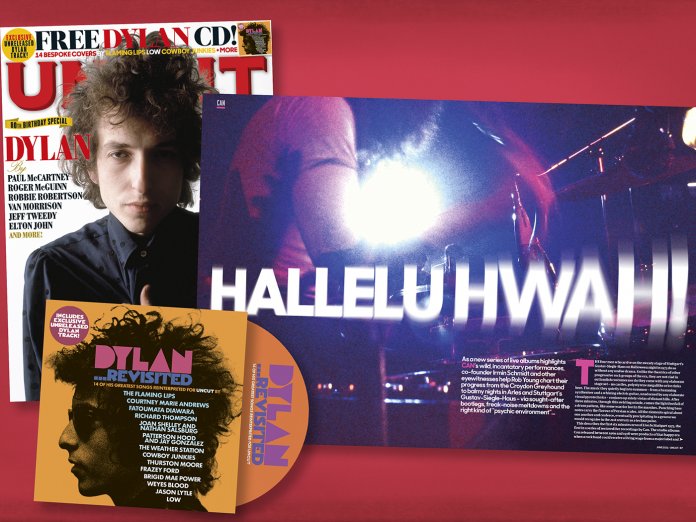 Halleluhwah! The latest issue of Uncut – in shops now or available to buy online by clicking here, with free P&P for the UK – features a six-page Can celebration as a new series of live albums highlights the band’s wild, incantatory performances. Co-founder Irmin Schmidt and other eyewitnesses help Rob Young chart their progress from the Croydon Greyhound to balmy nights in Arles and Stuttgart’s Gustav-Siegle-Haus – via sought-after bootlegs, freak-noise meltdowns and the right kind of “psychic environment”…

When Irmin Schmidt talks about the “architecture” of a Can live set, he points to the group’s custom of playing for around two-and-a-half to three hours every night, with an intermission (and rarely a support band). Never mind if their audiences came expecting to hear album favourites – Can stuck to their principles and reinvented the music anew each night. “Every concert we started with a pure improvisation or invention,” he says. “We never started by quitting a piece. On Stuttgart, the second piece is sort of related to ‘Bel Air’, but the very first thing we played was always our reaction to the place, the public, the sound on stage, the environment. I mean, the physical and mental environment – the psychic environment… The ‘vibrations’, you would have called it at the time!”

In fact, Schmidt reveals, Can had a ritual to generate the vibrations even before the band took to the stage. “Normally, nobody was allowed to join us in the last 20 minutes before going on stage. We were all alone and nobody was allowed into the dressing room. Not even Hildegard [Schmidt, Irmin’s wife and Can’s manager]! Because Hildegard would start talking about some organisational stuff, so even she was banned. Then we were sitting there, very silently making sounds, drumming on the table, and humming, or maybe playing an acoustic or electric guitar without amplification. Making music, very concentrated, and very relaxed, like a meditation before the concert. We did that every time, whenever it was possible. I mean, sometimes you came so late that it was panic. Nobody had the right to enter and disturb this kind of meditation.”

This singleminded approach to musical purity could often confound fans. “A lot of acts, they play the old familiar tunes and get the round of applause,” says Duncan Fallowell, a long-time friend of the band. “At a Can concert, you never knew what you would hear. So there was always that… It didn’t always work. But often it worked. And often it was in a realm that neither worked or didn’t work, but was just something new.”

Festivals, admits Schmidt, were largely avoided. “Most of the time there were too many limitations. You were limited in time. You had to be on at, say, 16.45, start playing, and at 17.35 you had to finish. That was not for us. We were too undisciplined! You were chased from the stage just as we started to get really into it.”

You can read much more about Can’s live adventures in the June 2021 issue of Uncut, out now with Bob Dylan on the cover!