Barry Hyde catches up with Uncut.co.uk as the band release their second album. 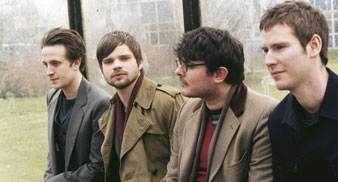 Uncut: Where are you right now?
We’re doing a few gigs – one in Hamburg, on in Cologne, and one in Berlin. Just doing some small gigs, we haven’t really done that many shows in central Europe, so we’re catching up I suppose. It’s so varied, from place to place in Europe – it’s weird when the next country is only ten minutes away.

Uncut: Is it tempting to debut new songs outside the public eye?
Definitely. The first proper gig, where we debuted all the new songs, was in Bangkok (laughs). We want to get them all up to a standard before the album’s out – we don’t want to shy away from playing new material because it’s not 100% up there. How was Bangkok? We had one day where there was nowt to do, so we did some fairly touristy things to be honest – went on a boat, went up to see some temples, hung around some of the food markets. We didn’t do anything sleazy! To be honest with you, that whole side of Bangkok is hideous. Some people just assume that you’re a sex tourist, they’ll catch them looking at you like you’re the most disgraceful human being. Or you’ll see these older British men who are there by themselves – you look at them and they’re so ashamed of what they’re doing. It’s like, why are you here by yourself, where are your friends? Ah, I know why. You’re a naughty boy. It’s the exploitation that goes on because of the pound, if we were a poor country, no-one would be going away to have sex with young boys. It’s a luxury we shouldn’t be able to afford.

Uncut: You recorded News And Tributes on a farm in Scarborough…
Yeah, just outside of Scarborough in the North Yorkshire dales. It took about six weeks all together. The first album was quite arduous – we recorded it twice, one with [Gang Of Four’s] Andy Gill, then scrapped two-thirds of the stuff we did with him because we weren’t happy with it. It became a real mess to be honest. So this time, it was like right, we’re going to go somewhere in the middle of nowhere, be really confident with whoever we decide to work with, and just get everything out of it that we should have got from our first album. We weren’t really prepared to make our first album when we came to Andy, we didn’t have our heads together enough. There was lots of touring around the recording. But now we’ve found our feet in the studio, and the whole experience of recording News And Tributes – we came away from it a different band, we felt fresh again.


Uncut: Although the first album was recorded all over, it felt quite uniform, while this one goes to some quite weird places…
I think it’s common that a band’s first album isn’t a particularly well thought out album as a whole. I think when we were writing a lot of the stuff for the first album, we didn’t even know if we were going to get a record deal – we were going into the garage thinking ‘Let’s write another song for our album!’ But when you’ve got a deal, you can think a little more. What is it that interests me about an album? It’s always variety – a great Led Zeppelin album goes right across the board, and I think we wanted to demonstrate that we could do that, that we’re not just a band that plays really spiky punk music. That’s not where we end, and it never was.


Uncut: How would you describe the mood of the record?
There’s more space to breathe – particularly from a performance aspect! What we did on our first album was something we were proud of, but it had to be that way, and we’re glad we’ve learnt from any mistakes that we’ve made. When I say mistakes, I think I just mean that we weren’t being completely forthright with our ideas. That’s the only mistake you can make really, that ‘You can fix it in the mix’. I suppose it was the ordeal of recording it twice – if we recorded the album that you heard first time, we’d have been over the moon. I suppose the new album is less of a juvenile record. We were all teenage boys when we got that album together.


Uncut: One of the first lines on the record suggests you “Brick yourself in”, while “Fallout” sees to be inspired by Cold War imagery – are you attracted by the idea of isolation?
“Fallout” is about a ‘80s propaganda film called Threads. It’s a hypothetical thing about what would happen if they dropped a nuclear bomb on Sheffield. I went with a group of friends and I came out and we all sat in silence, thinking about the possibility of Armageddon. If it ever happened, how would you make your final moments the best possible? You’d want to be with the right people, the people you absolutely love – but they’d be dead, I suppose, and so would you. It’s a pretty fucked up song, I suppose, but I’d rather do that than write, like, ‘This is a song about nuclear war – bombs, bombs, bombs…’ Also, though, it can be read as

a song about falling out with someone – splitting up with a girl, for instance, but not losing one another in the process.


Uncut: Do you know if Kate Bush heard ‘Hounds Of Love’?
Yeah, we got a message off her when we were on the farm, actually. I think we were busy up in the barn, or something, but she left a message on the answering machine. It went ‘Hello, Kate Bush here – just phoning to say I absolutely love your version of “Hounds Of Love”, we haven’t had a chance to meet yet but I hope we will, and hope you have a nice Christmas.’ Did we phone her back? (Laughs) No, we were terrified! We found out she was going to ring us, so every time the phone rang, we were like ‘You get it, you get it’. No-one wanted to speak to her, because… well, she’s a legend, isn’t she? What do you say to Kate Bush? I don’t know.


Uncut: Did you think about recording a cover for this record?
No. Some people might think “Hounds Of Love” was something we did later on, to beef the album up or score some daytime radio play. But we’ve been doing Hounds Of Love for four and a half years, before we ever had a record deal. We treat it like one of our own, and for it not be on the first album would be to deny what that album was about. I think cover versions can be excellent for bands – it’s way better than writing a mediocre song.


Uncut: Do you feel any kinship with ‘80s bands like Scritti Polliti, or the New Pop movement – bands from a DIY background, who aren’t afraid to make pop music?
Yeah. Pop isn’t a dirty word. Only when it’s industry-controlled pop music. I think we do consider ourselves to be a pop band, but just from a weird angle – we’re not all just post-punk boys who swear by Sniffing Glue, and shit. We love pop.


Uncut: How do you plot your vocal harmonies?
For this album, a lot of them were done around a piano. Pianos are really helpful because you’ve got the full range of notes in front of you, it’s a much more visual thing than playing the guitar. But there aren’t as many harmonies on this album. We started doing mad harmonies because we were show-offs, but we’re learning how to pull back a bit – this album is all about us making a song out of five ideas, not 55. Because that can make a bigger sound, more spacious, and it helps what is on the record to get more recognition.


Uncut: One of the biggest departures on the record is “Burnt”…
It’s dark. That song, for me, is the song on the album that typifies how different this record is. If you play that next to, say, “Knows” – this insane, mathy punk song – you wouldn’t recognise the two bands. It’s basically about relationships again – how we constantly prove that we have no control over love or passion, and we never, ever learn from our mistakes. We’ll gladly plummet straight back into a relationship, or make promises to people we can’t keep. It’s constant, and constantly repeated – the thrill of the chase, the possibility that this person might be the one. I wouldn’t say it was cynical. It’s probably representative of my relationships in general!


Uncut: Then there’s “Return Of The Berserker”, which is only a couple of notches off Big Black…
Damn right, Big Black, yeah. That song was totally spontaneous. We played it once, didn’t structure it, and overdubbed a couple of guitars afterwards just to make it sound insane. When the album was coming together, we realised there was more space to breathe, to listen – so we wanted to prove to ourselves that we could still kick the shit out of it if we wanted to. We recorded it in the cattleshed, and at the end of the take, we could hear Ben [Hillier, producer] on the intercom, just laughing his head off. And when we listened back, to be honest, I’ve never had a thrill like that from music at all.