REM's frontman backstage in Basle on their European tour, 2004 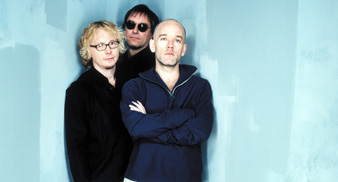 Have you played with the DVD-As yet?
“No, I don’t have all the speakers. Do you have to have a bunch of speakers? I’m pretty simple in terms of how I listen to stuff; i-Pod and my computer, basically.”

Has it given you an opportunity to look back on 16 years of music?
“Yeah, in a way it’s an extension of the greatest hits package. There’s all this extra content, all these little films that maybe people haven’t seen. I think if people like that stuff, there’s a lot there.”

Do you play the old records much?
“No, I don’t really. Sometimes before we make a record I go back and listen to a few. It’s equally humbling and uplifting. But just today there were a couple of songs that we wanted to try out live and we had to go listen to the CDs, songs we haven’t played in some cases for the better part of two decades: “Seven Chinese Brothers” we’ve played twice in the past six days, and we haven’t played that song in 18 years. And today we were trying to dust off “Turn You Inside Out”, just to see what it sounded like.”

‘Green’ sounds like the record where the two distinct sides of the band were most separated; the acoustic side and the heavier, anthemic side.
“Yeah, also on “Turn You Inside Out” we brought in a fellow who did beats and it seems to me a moment where we might have gone more in the direction of Blur, in terms of how they utilise technology. But instead we went the other way.
“We’ve utilised technology like that since our first album, but we’ve always had it as an underpinning, not as a featured instrument. It felt to me like a period of time where everything could have radically changed, and didn’t.”

You were describing it as a very uplifting and anthemic record at the time. . .
“Oh, I always say that. You can’t quote me on just about anything that I say about our records.”

You say every LP is the best one you’ve ever made.
“Well, you know what, that’s always honest. That’s not a line. If I didn’t feel that, believe me, the record would never be released. We have to feel so strongly about the thing, because once it’s pressed, it’s there. There’s no going back.”

It’s ironic that the songs on ‘Green’ people thought were uncommercial – like “The Wrong Child” – proved to be a template for the most successful material.
“We toured that record for a year, which turned out to be the culmination of ten years of being constantly on the road. We were sick to death of touring. Peter was sick of being a pop star, the guitar god, and so he decided to teach himself other instruments. Among the instruments that he picked up was the mandolin, which gave us “Losing My Religion”. It was really a reaction to what we had done for the better part of a decade that led to ‘Out Of Time’ and ‘Automatic For The People’.”

Lyrically, you seem to be waging a constant battle between privacy and stardom, like on “Losing My Religion”.
“That’s not about me. I rarely ever write about myself and when I do, I’m really honest about it. Not only with the band, if anyone else is involved with the song I tell them about it. None of the people have ever had to guess, ‘Is that horribly tragic figure me?’ They would know before the record came out.
“I’m just not that fascinating a person to have had all those lives that I’ve written about.”

But people have only believed that you sing in character since ‘Monster’. You had to portray yourself as a bastard for people to understand that.
“That might have been closer to me than any of the prior songs [laughs].”

You were pretty reclusive in the early ‘90s, compared with how you’re so press-friendly these days.
“I went through a period where I was really tired of seeing and reading about myself. If I’m tired of me, I’m sure the public is as well. For years I would do press for one record, then not do press for the next record. I hopscotched like that for four or five records. I just felt like I’d run out of things to say – in a way I feel like that right now. We’ve been doing promo for the better part of five years and I’m not sure that I have anything really new to say.”

But when you backed off, you reached a commercial highpoint.
“Well, I think the success of that song [“Losing My Religion”] and everything that came from that was way beyond anything that we could calculate. It was going to happen and that was that. I’m really glad it did. That was a really awesome fun time.”

Do you think, looking back, that you’ve had a logical career?
“That would not be the operative term.”

With the possible exception of ‘Around The Sun’, your haven’t done the most expected thing very often.
“Was ‘Around The Sun’ expected? I got the exact opposite impression from some of the stuff that I read. Because I had said that it was a political and angry record, people expected it to be ‘London Calling’. And they got this instead, which is somewhat introspective and much more of a whisper in terms of protest.”

Sure, but tonally it resembles ‘Automatic For The People’, in its gravitas – in a way that ‘Monster’, say, didn’t.
“OK. I sure like the writing on that record. I have to say, I’m still very proud of it.”

It’s interesting that the set’s bookends – ‘Green’ and ‘Around The Sun’ – are both political records.
“Well ‘Green’ was made to be political, because it was released on Election Day – that was the day Warners decided to release it. That was not a calculation on our part.
“In terms of logic, I would say absolutely not. There’s consistency, that some might find tedious. But I think the one thing that I can say about us is that we’re very consistent about certain things and part of that is our desire to do the very best work that we can and not rest on our laurels, or not allow formula to come into what we do. That’s something that’s always pulled us: sometimes in good directions, sometimes not.”

But no matter how much you change instrumentation, you’ve an instantly recognisable way of constructing a song.
“Right. Our limitations are a curse and a blessing.”

How’s the tour going?
”Awesome. This is our sixth show in seven days – I can’t believe we decided to kick off with a week like this. It feels really good to be on the road again. Obviously there’s a different set because it’s a different tour. We’ve got a giant screen, we’re playing with that a lot and having fun with that. We’re trying to change the set around but, again – a curse and a blessing – there are so many songs that everyone loves to hear every night. We’re down to six or seven slots where we can have a revolving door setlist.”

Are you reconciled to the prospect of being on the road for so long?
”Yeah, we made the schedule, we mapped it out, and we signed it off.”

There’s no reticence in the wake of those epic tours which damaged the band?
“The publicity that came out of the ‘Monster’ tour was that it was just a disaster for us. And in fact, only one bad thing happened, and that is that Bill almost died. Outside of that it was just a really successful tour.”

But you had a hernia as well.
“Yeah, but that was minor surgery. My mistake was to agree that I could sing three weeks after on Percodan. I couldn’t walk up a flight of stairs, but I’m up there singing 24 songs a night. That was a little bit stupid.”