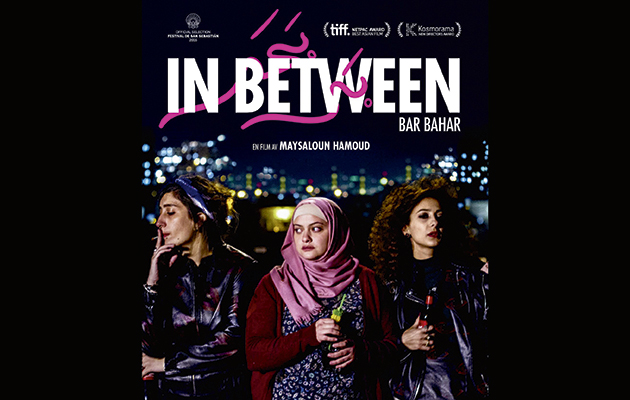 When In Between was released in Israel at the start of the year, the Palestinian writer-director Maysaloun Hamoud received attention from some unexpected quarters. First, the authorities in Umm al-Fahm, one of the country’s largest Arab cities, tried to ban the film; shortly after, Hamoud received the first Palestinian Fatwa issued since 1948. In Between – Bar Bahar in Arabic – focuses on three women living in the centre of Tel Aviv, away from their families and the weight of tradition.

There is Laila (Mouna Hawa), a lawyer, and Salma (Sana Jammelieh), a DJ, who are both immersed in the city’s underground scene – we meet them first at a club, taking cocaine in a backroom with a group of friends. A new flatmate arrives – Nour (Shaden Kanboura) – a hijabi from a small village. While her outlook seems initially opposed to Laila and Salma’s progressive lifestyle, Hamoud is more concerned with finding an equitable balance among this irregular sisterhood. They are all caught between their conservative Palestinian culture and a more liberal Israeli state that does not regard them as equals.

On a more personal level, they are all experiencing relationship problems. Despite his supposed independent credentials, Laila’s boyfriend turns out to be yet another conservative male. Salma, a lesbian, takes her latest girlfriend to meet her unwitting parents – at a meal designed to introduce Salma to a potential husband. Meanwhile, Nour’s ghastly fiancé, Wissam (Henry Andrawes) – an ostensibly pious traditionalist who disproves of her studies and views Laila and Salma as corrupting influences – finally reveals his true colours. The three leads are uniformly excellent. Although Hawa and Jammelieh have the more colourful roles, nevertheless Kanboura is given more opportunities to convey wider emotional range. Her quiet, studious Nour is the emotional centre of Hamoud’s brilliant film.