How Prince made his psychedelic classic, Around The World In A Day

"You never knew what to expect, you were never forewarned" 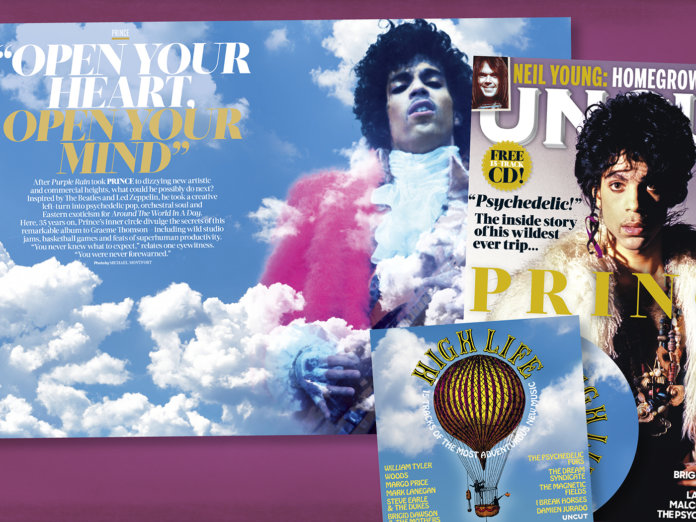 The new issue of Uncut – in shops now and available to order online by clicking here – features an in-depth exploration of the making of Prince’s 1985 album, Around The World In Day. Released just two weeks after the conclusion of his Purple Rain tour, it found Prince taking a creative left-turn into psychedelic pop, orchestral soul and Eastern exoticism. 35 years on, Prince’s inner circle divulge the secrets of this remarkable album to Graeme Thomson. Here’s an extract from that feature…

In May 1984, Prince installed the Revolution in a warehouse at 9025 Flying Cloud Drive in the Minneapolis suburb of Eden Prairie. A low wood-panelled building with a tin roof, he moved his operations there as a designated studio/rehearsal space and convened the band almost every day for several months. It was at Eden Prairie that much of Around The World… came together. Ostensibly they were rehearsing for the Purple Rain tour, but everything was on the table.

“We must have rehearsed for that tour for months, six days a week, from early afternoon until six or sometimes nine or ten in the evening,” says tour manager Alan Leeds. “Some days he would come in and rehearse the show at least once, sometimes two or three times. He wanted it embedded so nobody had to think about what to play next. Some days he might spend the whole afternoon on one song. Or he might come in with a new song. You never knew what to expect, you were never forewarned. All the rehearsals were recorded start to finish, he had hours and hours of tapes, and he would sit up all night listening and thinking about them. You would have no idea what to expect when he walked in the next day. It’s not like he had a script.”

“A lot of it was introducing new material and just jamming,” says Revolution bassist Mark Brown. “He would always be recording and he would get back to his studio and he knew how to take that energy and then build on it. That was the whole purpose of having a group. He wanted that live, real powerful energy that you cannot get as a solo musician in the studio. It’s hard to capture the energy when you play all the instruments yourself. You can’t duplicate that.”

The recording practices at Eden Prairie were rudimentary. “I had a console and a tape machine right there on the warehouse floor, with no separation between me and the band like you would normally have in the studio – it was just open air!” says Prince’s engineer Susan Rogers. “He liked working there. It was seat-of-the-pants, home-school mentality, in a warehouse with a tin ceiling over our heads.”

The variation in sound quality is obvious on Around The World…. Recorded at the warehouse with the band, “Paisley Park” is relatively rough and ready compared to the superior studio taping of “Pop Life”. For Prince, such niceties were secondary to the magic of a particular performance. “He wasn’t a stickler for audio fidelity,” says Rogers. “That was an important lesson I learned from him. He recognised that no-one is going into the record store to look for sounds; they are going there to look for music. What he needed from his audio equipment and the people who operated it was to just keep the signal flowing – don’t let anything break down or make him stop. The answer always had to be ‘Yes’, then you had to figure out how to get it done!”

You can read much more about Prince and Around The World In A Day in the new issue of Uncut, out now – click here for more details about the rest of the magazine.