History Of Rock 1979 + End Of The Road reviewed

Joanna Newsom, Cat Power, Goat and all the other festival highlights in one place 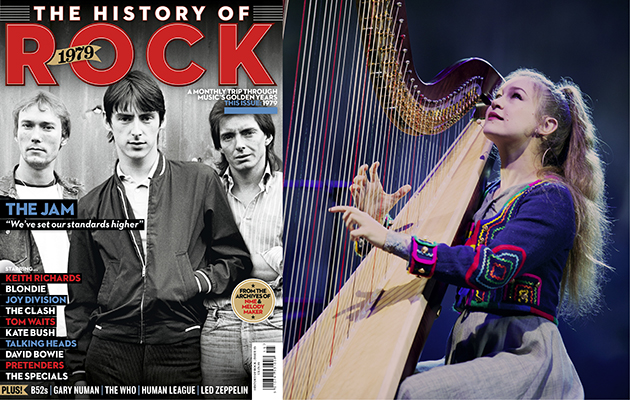 If, like me, you’ve made it back from the End Of The Road festival in the past day or two, the real world might still be something of a challenge to deal with, the comforts of actual beds and shelter from storms notwithstanding. Even in Saturday’s downpour, the Uncut team had a fine, busy time at this very special festival, and I’d like to thank Charlotte Treadaway, Laura Snapes and Mark Bentley for representing us so strongly down in Larmer Tree Gardens.

To get a taste of what was going on at the festival, or to remind yourself of some of the myriad delights you saw at the End Of The Road, I’ve put together a few links to the reviews everyone filed over the weekend for uncut.co.uk (my personal highlight, for what it’s worth, was the great Imarhan on Sunday lunchtime).

Back in London, we’re putting the finishing touches to the next issue of Uncut; the last feature, an interview with the man behind one of the autumn’s key albums, arrived from America yesterday morning in the nick of time. In the meantime, we also have a new edition of The History Of Rock hitting the shops this week. We’ve reached 1979, The Jam are on the cover, and there are interviews with Blondie, Keith Richards, Joy Division, Tom Waits, The Clash, Talking Heads, Bowie, Pretenders, The Specials, The B52s, The Human League, The Undertones, The Pop Group and Tubeway Army, among others. Have a look in our History Of Rock shop, where you’ll also find our first volume, History Of Rock 1965, has been restocked (that one’s back in UK stores, too). And here’s John Robinson to introduce 1979…

“Welcome to 1979. There are those who think that the death of Sid Vicious in New York of a heroin overdose at the start of the year also signals the death of punk. Perhaps it was a passing fad, as rock’n’roll itself was once thought to be…

“In many ways, however, punk continues to proliferate. There are tawdry elements to this – the faintly sleazy exploitation industry around Sid and the Pistols; the McLaren/Lydon litigation, to name two – but there is also evidence of more positive activity.

“New, self-determined music is being made by bands like Joy Division and the Human League – both emboldened by new liberties and new technologies. Elsewhere, the likes of Blondie, the Undertones, the Pretenders and The Jam turn their revolution into pop. A tour by two bands, The Specials and Madness, meanwhile, effortlessly brings a charmed cultural harmony to the mix.

“This is the world of The History Of Rock, a monthly magazine which follows each turn of the rock revolution. Whether in sleazy dive or huge arena, passionate and increasingly stylish contemporary reporters were there to chronicle events. This publication reaps the benefits of their understanding for the reader decades later, one year at a time.  Missed one? You can find out how to rectify that by visiting our History Of Rock shop.

“In the pages of this 14th edition, dedicated to 1979, you will find verbatim articles from frontline staffers, filed from the thick of the action, wherever it may be. Watching Lou Reed and David Bowie slug it out in a restaurant. Looking on astonished as Jerry Dammers attempt to placate a livid feminist, by inviting her to a party. Witnessing the domestic upheavals of Keith Richards and Anita Pallenberg.

“’Sid thinks he done it just because he woke up with the knife in his hand…’ says Keith of punk’s lead story.

“It’s the kind of hard-won wisdom that might keep a man alive for a while yet.”