Reading about the South By Southwest festival tends to produce, in me at least, a mix of empathetic fatigue and terrible envy, and last week’s bombardment of tweets, blogs, news stories was no different. 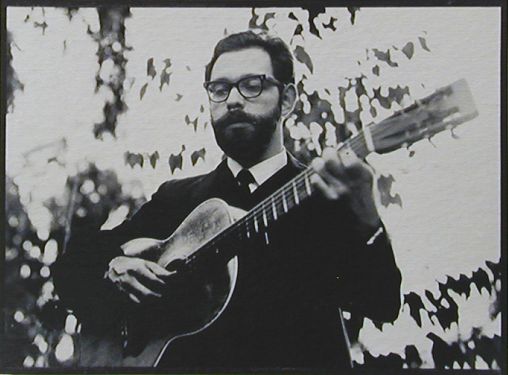 Reading about the South By Southwest festival tends to produce, in me at least, a mix of empathetic fatigue and terrible envy, and last week’s bombardment of tweets, blogs, news stories was no different.

Amidst all the reports I read of Prince secret shows, buzz gigs by a selection of Britain’s next purportedly biggish things (on my visits to Austin, it always seemed sensible to avoid bands I could see most months in London, but whatever) and so on, one show stood out: the Tompkins Square label showcase at St David’s Episcopal Church.

I remember once seeing a great gig there, organised by the Table Of The Elements label and featuring Tony Conrad and Jonathan Kane, and taking a pew in the cool old church provided a necessary meditative respite from the chaos that predominates at South By Southwest. This year’s Tompkins Square evening sounds like it worked in a similar way, according to a report in the Washington Post which discussed the performances there by Daniel Bachman and Hiss Golden Messenger. “I didn’t even want to come to this,” Hiss’ MC Taylor is quoted as saying. “I don’t feel like my music is really conducive to a situation like South by Southwest. . . . It’s hard to get people to listen to a songwriter with an acoustic guitar. But it’s hard anywhere.”

Evidently, the Washington Post writer was elsewhere when one of the weirder and more noteworthy events of the evening took place: the first ever show by one of the surviving guitarists of the Takoma generation, Harry Taussig. Taussig is 71, and somehow avoided playing live in the mid ‘60s, when his first (and until recently, only) album was recorded. NPR have a great story about Taussig, including this prediction from him: “My great fear is that I’ll be eating tomato salads for the next three weeks from what people throw at me. So I’ll bring my own basil and mozzarella to make a nice insalata caprese.” Unlikely, I imagine, but please let me know if you saw the show; I’m intrigued.

As alluded to here many times, Taylor has a very fine new Hiss Golden Messenger album, “Haw”, due out on Paradise Of Bachelors pretty soon; it’s an indication of how strong his writing is right now that Taylor managed to leave off the standout new song from his recent sets, “Brother Do You Know The Road”, and save it up for what one assumes will be another record.

In the slipstream of “Haw”, though, there’s yet another Taylor-related release pending: the debut album by Golden Gunn, his collaboration with the equally recommended guitarist – and, increasingly, singer – Steve Gunn. Gunn is busy at the moment, too: following a couple of Sandy Bull/Billy Higgins-style duo albums with the drummer John Truscinski, the pair have roped in a bassist and made a tremendous full band album, “Time Off”, due soon, in which Gunn shows that he’s as affecting a singer/songwriter as he is a dextrous American Primitive. Here’s an early version of my favourite track, the desert blues-inflected “Old Strange”, recorded with The Black Twig Pickers…

ANYHOW, Golden Gunn. “Golden Gunn” is ostensibly a bunch of cosmic porch jams, touching on Takoma folk, outlaw country and plenty of JJ Cale vibes (there’s an artist I need properly schooling in…). Easygoing virtuosity is a given, but the songs are pleasingly substantial (cf “The Sun Comes Up A Purple Diamond”, which loosely resembles a campfire Lou Reed), and there are touches of dub and funk hark back to earlier Hiss Golden Messenger outings, and to territory Taylor has neglected a little on recent sets: the standout “From A Lincoln Continental”’s slick gris-gris was first essayed on a live record released in 2010, “Root Work”.

“A Couple Of Blackbirds”, meanwhile, reminds me of Shuggie Otis and, serendipitously, of next week’s new issue of Uncut, which features a lengthy review of the newly expanded “Inspiration Information” and an interview with the generally elusive guitarist. I shall be professionally coy about most of the other contents for a day or two, but I did recently take a trip to Richmond, Virginia to interview another SXSW player, Matthew E White, and you’ll be able to read about that in there. More of all this from Allan next week, if you can bear the suspense…