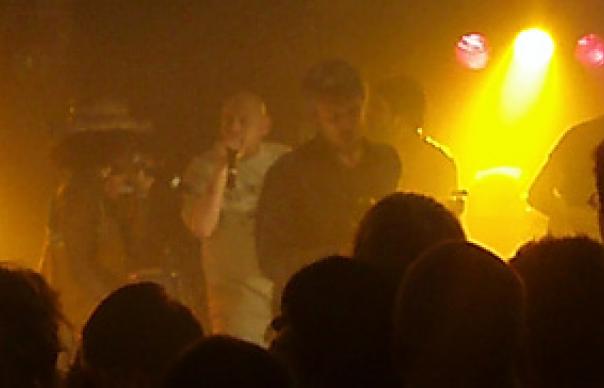 The south coast town’s attempt at staging a ‘music export’ convention – showcasing the best new music around – will see 150 bands playing across 20 venues, plus impromptu acoustic sessions sprouting up all over the place by new artists and special guests. All we need is an all-inclusive neon pink wristband and we’re in.

The opening night’s buzz is that the Happy Mondays will be playing a party at the end of the pier, showcasing new material and hopefully dancing through the hits. The other big buzz is a Club NME show by The Gallows, the most controversial new rock band straight out of Watford. The only problem is they’re not on ’till 1am and we’ve been advised to get there by 11 if we want to get into the venue – better get a move on – there’s a lot of ground to cover before we can get there.

First up, we check out the Uncut venue – Uncut is hosting three nights at the Red Roaster Cafe, marking our debut year with a presence at the festival. Tonight will see singer-songwriters Kate Walsh, Jersey Budd, Findlay Brown and Aussie brother and sister duo Angus & Julia Stone perform in the laid-back coffee shop surroundings.

We leave the venue as the queue builds for opener Jersey Budd, to check out the early bands down at Audio, where the Barfly promoters have got The 1990s playing. However the queue is already a ‘one in one out’ system and we haven’t got time to hang about.

Head to the Ocean Rooms, a fantastically confusing venue with a massive Blondie pop art painting above the front door with the slogan “Get Up” – we catch Hertfordshire band Look See Proof play jangly plain indie – their closing song and single “Start Again” is OK if only just that. Upstairs is far better, where Danish five-piece Oh No Ono are concocting a funky psychedelic storm. They have huge hair and huger grins, and track “Practical Money Skills” causes much whirling funky dancing from the incredibly sweaty room that have gathered. They end on a brave but perfectly executed version of “a song from Great Britain” – a pitch-perfect cover of The Beatles’ “Tomorrow Never Knows.” A great set closer, but now desperate to get some fresh air, and maybe a beer. This running up and down the streets of Brighton is thirsty work.

Its still daylight, amazing. Walking back down past the big giant upside down purple cow stage, aptly named the Udderbelly stage, we kick ourselves – we’ve just missed a T-Mobile surprise ‘street gig’. The Gossip have just ended a set and hordes of grinning sweaty indie guys and gals are spilling out into the streets clutching goodie bags and looking at their Great Escape maps looking for the next music fix. We hear a rumour that the Scissor Sisters will be the next surprise band on – hoping that’s true – they’d be perfect on a balmy evening like this.

Pop back to the Red Roaster, and catch the opening songs by Angus & Julia Stone. Compared to the madness outside, the hush and quiet of the cafe is startling. Fragile, beautiful songs with the bare minimum of strings and drum beats. Heartbreaking songs, but my heart is still racing so need to get out and attempt to break in to the Happy Mondays showcase on the pier.

9.57pm and the Mondays are due on in three minutes – Uncut is hoping that Shaun Ryder doesn’t break the habit of a lifetime and is a few minutes late – but no joy! The Mondays appear to have been cloned and replaced by a band that are definitely not a shambles at all! We make it in time for the opening sirens – they are here to showcase material from their new album “Uncle Dysfunktional” – their first in 14 years. And the songs are amazing – tuneful, dancey, silly lyrics but you don’t care. “Jelly Bean” is especially brilliant – with the crowd singing along, waving their baggy-era hats in the hair.

Ryder proclaimed before the show that if “anyone didn’t like the new stuff, he’d chuck them in the sea”. I can’t see that being a problem tonight; swimming seems a good idea, considering how hot it is in the tiny disco-ball dressed bar on the pier.

I leave the Baggy boys to it before the end to make a mad dash back to the Red Roaster – Uncut hears that the diminutive singer Kate Walsh is going down a storm as the night’s closing performer. We squeeze into the cafe to find the crowd sitting crosslegged on the floor right up to the performance space at the front. Everyone looks completely mesmerised, floating on Kate’s pure and stunning vocals. Set closer “Your Song” is simply brilliant. Apparently Kate has a very sore throat, she had to cancel a gig earlier in the evening due to illness – but if what Uncut witnesses is the sound of illness, we can only imagine what she sounds like when she’s healthy.

Uncut is knackered now, and we hear that Gallows over at the Komedia is already oversubscribed, so we take our leave to sit on the beach eating proper seaside chips, watching festival-goers who’ve had a long evening out attempt to go skinny-dipping in the icy waters.

We’ll be back tomorrow for what will be another top night of musical adventure on the streets of Brigho – as the locals might call it. Uncut is hosting an XL Recordings night with Elvis Perkins, Kid Harpoon and Jamie T-esque Jack Penate all doing their thing in the Red Roaster.

Elsewhere we’ll try and catch up with Canadian’s The Heights, who are meant to be fantastic, and Air Traffic. The Gallows are also playing again, at the more Uncut-friendly time of 9.30, so hopefully we’ll catch them this time, and Friendly Fires might be worth a shot too – we have a craving for some glo-stick fun.