His solo years celebrated in the new issue of Uncut 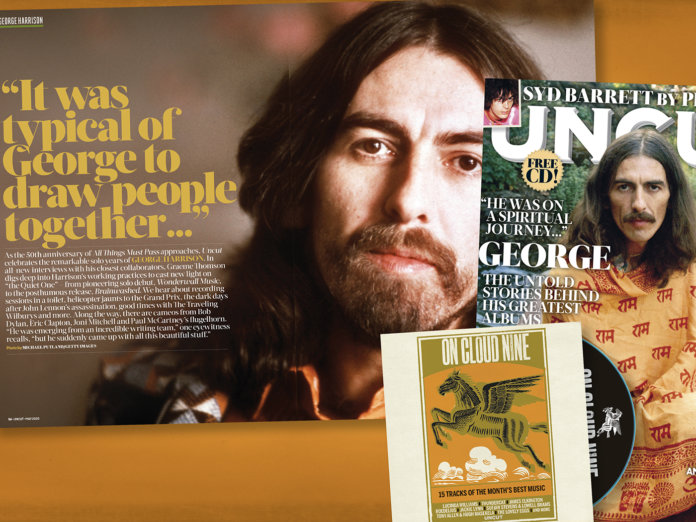 The new issue of Uncut – available to order online by clicking here, with free home delivery for the UK – celebrates the remarkable solo years of George Harrison with an extensive 11-page feature. In all-new interviews with his closest collaborators, Graeme Thomson digs deep into Harrison’s working practices to cast new light on “the Quiet One” – from pioneering solo debut, Wonderwall Music, to the posthumous release, Brainwashed.

In this extract, collaborators recall the making of 1968’s Wonderwall Music – Harrison’s soundtrack to Joe Massot’s film about a mad professor and a Biba girl called Penny Lane, released three weeks before the ‘White Album’. With cameos from Eric Clapton and Peter Tork, it’s the first Fab solo record, the first album on Apple and a world music crossover before its time.

JOHN BARHAM [MUSICIAN/ARRANGER]: Wonderwall… was primarily an extension of his love of Indian music. George became a pupil of Ravi Shankar and he impressed me as being a very respectful and disciplined student. He seemed at ease with the sitar. There were already obvious influences on Beatles songs like “Within You Without You” and “Blue Jay Way”.

DAVE MASON: George was an early adopter! He had done those wonderful Indian tracks on Revolver and Sgt Pepper, and was learning with Ravi Shankar. He gave me the sitar he’d first learned on. I used it on “Paper Sun”, Traffic’s first single.

BARHAM: Joe Massot offered him complete freedom in creating a music score for the film, and he took advantage. But it was obvious that George was still intensely involved in his creative work with The Beatles. When we were doing Wonderwall, The Beatles were using the same studio; they had it block-booked. There were times when George’s sessions finished and the other three Beatles would come in for an evening session. When this happened, George would become re-energised and go into a world apart with the other three that nobody else seemingly could enter. At one session I found a flugelhorn lying around the studio. It turned out to be Paul McCartney’s.

ROY DYKE [DRUMS, THE REMO FOUR]: We recorded backing tracks at Abbey Road to accompany certain points in the film. George had timed it all with a stopwatch: “We need one minute and 35 seconds with a country & western feel.” Or, “We need a rock thing for exactly two minutes.” Nothing was really written. We’d talk over ideas he wanted, play something, and he’d say, “That’s good, keep that. I like the piano there.” It was very experimental. There were different tracks with different atmospheres, and a few different sessions. The Indian musicians were recorded in Bombay. At another session he used Eric Clapton, who did a great riff on “Skiing”. I heard he borrowed a five-string banjo from Paul McCartney for Peter Tork to use!

BARHAM: Big Jim Sullivan, who was recording with Tom Jones at Abbey Road, happened to drop in and played bass on “On The Bed”. [It was] a free atmosphere, the sessions were very creative and very enjoyable. I was very impressed how well George had mastered [Indian classical] techniques. He had dropped in on one of Ravi Shankar’s recording sessions for the BBC/Jonathan Miller production of Alice In Wonderland at the Shepherd’s Bush BBC Centre, which I worked on. At the session we were recording a scene where Ravi soloed and I played an Indian jhala texture on piano. George was fascinated by the combination of sitar and piano, and subsequently at his house in Esher he asked me to play one of my own compositions based on jhala texture. He looked and listened very closely. Later at one of the Wonderwall sessions he very abruptly sat down at the piano and with great intensity started playing his own jhala over a chord sequence. We had many discussions about Indian philosophy and spirituality. I’m convinced that George was one of the very few people I’ve ever met who was on a spiritual journey.

You can read much more about George Harrison in the new issue of Uncut, on sale now.