For anyone with even a passing familiarity with the work of Belle and Sebastian songwriter Stuart Murdoch, God Help The Girl – his debut as a writer and director – will hold few real surprises. 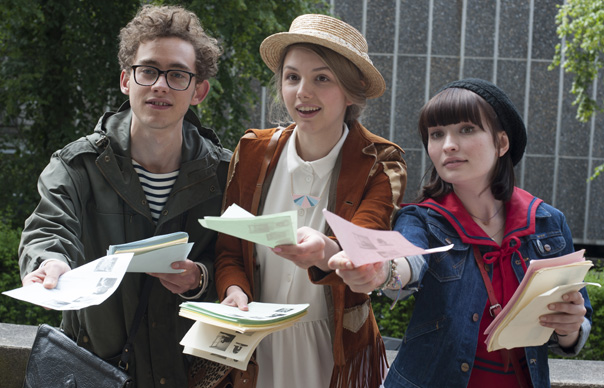 For anyone with even a passing familiarity with the work of Belle and Sebastian songwriter Stuart Murdoch, God Help The Girl – his debut as a writer and director – will hold few real surprises.

The action takes place in a rarefied version of Glasgow, peopled by remorseful outcasts and socially awkward geniuses. The focus is on a pretty but troubled girl and a hopelessly love struck boy. Spectacles, berets, charity shops, bicycles and mix tapes all figure highly, while characters possess a kind of unaffected sweetness as they dream, read, walk, discuss music and sing – sing – SING!

As you may have gathered, God Help The Girl is essentially Murdoch’s highly singular vision translated from song to screen: a whimsically nostalgic musical fantasy inhabited by pale, serious boys and girls in bobs and polo necks. In fact, God Help The Girl has had been an ongoing side-project for Murdoch for several yearns now, generating several singles and, in 2009, an album before shooting began in 2012 on this Kickstarter-funded feature. The film itself strives for the light-hearted mood of Bill Forsyth but, as Murdoch’s protagonists wander dreamily round Glasgow like kids on a perpetual school holiday, it more closely resembles – tonally, at least – an updated take on something like The Swish Of The Curtain, where a group of plucky children enjoy a spot of amateur dramatics. Indeed, Murdoch’s film features a canoe trip along the Forth and Clyde canal that calls to mind another piece of post-WW1 children’s fiction, Swallows And Amazons.

The film centres on Eve (Emily Browning), a resident in a mental health unit who is undergoing treatment for anorexia. She is prone to escaping, however, and one night at the Barrowlands she meets James (Olly Alexander), singer with a band, King James The Sixth Of Scotland, who is instantly, inexorably smitten. Pencil-thin and bespectacled, with a self confessed “constitution of an abandoned rabbit”, James improbably works as a lifeguard at the university swimming baths. The two click and, along with Cassie (Skins’ Hannah Murray), a rich girl James is giving music lessons to, the three decide to form a band. In the bed-sits and bohemian cafés of Glasgow, Murdoch’s twee trio argue about band names (they settle on God Help The Girl) or whether they need a drummer, print flyers, and go about their business preparing for The Big Gig.

There’s something faintly strange about a film set in Glasgow where everyone speaks in polished middle-class English accents (Cassie is English; James is Scottish born but has lived in England all his life; Eve is an Australian); the only time we hear dialectical Glaswegian spoken is when the three are briefly pestered by some lads who take a shine to Cassie. Snobbishly, James describes Murdoch’s adopted hometown as “a Victorian theme park run by neds”. Is this Murdoch’s own opinion? One hopes not, of course, but it’s telling that the action in God Help The Girl takes place in a hermetic environment that could easily be transposed to any city where pensive, arty types can take shelter in cafés and bookshops away from the great unwashed masses. In many respects, God Help The Girl is the least Scottish film I can think of: Forsyth aside, Murdoch’s reference points appear to be Jacques Demy or Truffaut, Pennies From Heaven and Sixties’ British pop musicals as well as the giddy thrills of Nesbit, Blyton et al.

Whether or not you like God Help The Girl inevitably depends on whether you’re prepared to commit to Murdoch’s vision. The songs themselves are predictably lovely – it’s difficult not to be swept along by them – but his three leads are, by turns, endearing and infuriating. As an iteration of the Manic Pixie Dream Girl trope, Eve alternates between neurotic, capricious and winsome. Needless to say, Murdoch’s camera adores her, framing her wide eyes and bob like an infatuated teenager. It’s a questionable decision, I think, to give one character a serious eating disorder and then suggest that singing some pretty songs can alleviate it. Murdoch also struggles to fill the run time – close to two hours, when 90 minutes would have been punchier – which is partly down to the fact the film lacks much in the way of dramatic incident. There is no crisis to avert: no rival bands intent on derailing the band’s musical vision, no hostile landlord to evict them, no trust fund about to be cut off. No struggle, no grit.

But I suspect Murdoch isn’t particularly concerned with the real world: he is warm and sincere where his characters are concerned and you could reasonably assume that it is the specific detail of their lives he is more interested in than any bigger picture stuff. You can see it in the way the camera closes in on Eve’s handwriting on the label of a home-made cassette, or the lettering on a band flyer and the books his characters are reading. These are what count in Murdoch’s universe: not the more mundane business of who’s paying the rent. “No one ever cried at a Bowie song,” James says at one point, and you suspect Murdoch’s characters would rather live or die by a point like that than anything else.