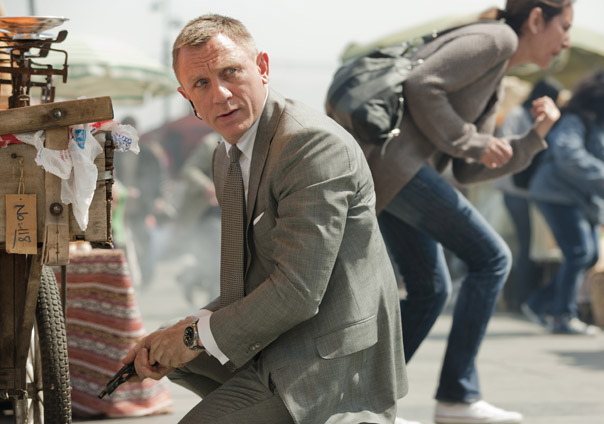 Much as the Rolling Stones have marked their half-century with a new single, “Doom And Gloom”, celebrating all that’s best about the band’s musical heritage, so the producers of Skyfall have set out to commemorate James Bond’s 50th anniversary on screen by stacking up reminders of the franchise’s most successful tropes. So we get a pre-credits chase sequence round an exotic foreign location, a ballsy theme song, the return of several familiar characters from the franchise and, in Javier Bardem, a deliciously larger-than-life villain of the kind not seen since Roger Moore’s heyday on the series.

But for all that is familiar about Skyfall, the idea of change is also floated quite freely here. One of the recurring themes in this, the 23rd official film in the series, is that the world is moving forward. There is much talk about “the inevitability of time” and, as Bardem’s Raoul Silva leers at Bond, “England, the Empire, MI6. You’re living in a ruin.” Indeed, this is a world where the conventional methods of espionage are, we’re told, redundant. The plot of Skyfall hinges – Wikileaks style – on a stolen hard drive containing a list of Nato operatives embedded in terrorist cells that Silva proceeds to leak online in batches, a week at a time. Judi Dench’s M is hauled in front of a parliamentary committee. Ralph Fiennes’ government bod suggests she step down. Can Bond adapt to the modern world? Is he an analogue agent in a point-and-click digital age? You can almost see the winds of change ruffling through Daniel Craig’s bristly buzzcut. As Q (Ben Wishaw, playing the part like a hipster version of Moss from The IT Crowd) tells 007, “We don’t make exploding fountain pens anymore.”

As well-paced as it as, this first hour – shot washed out blues and steely greys, like Christopher Nolan‘s Gotham – feels like a little like an episode of Spooks. On the other hand, Craig is a splendid, sinewy Bond, scowling and authoritative, like a bulldog in a tuxedo. Bardem is a great match for him: sporting a ridiculous nicotine-yellow dye-job, his Silva is grotesque, playful, an MI6 agent gone rogue who’s surfaced with the intention of bringing down M, his former boss in pre-handover Hong Kong. Bardem has a strange, watchable face – thick lips, equine teeth, a round jaw, buggy eyes. One of the pleasures of Skyfall is watching a number of very good actors – chief among them, Bardem, Dench and Fiennes – in some meaty scenes. If there’s one thing Skyfall does well, it’s actually allow its actors space in between chases, explosions and gunfights to talk and breathe.

A lot of this, I suspect, is down to Sam Mendes. Unusually, the producers have chosen a ‘name’ director for the franchise – perhaps it’s a present for their birthday boy – but as you’d hope Mendes has chops. A recurring criticism I have of Mendes is that I don’t think he’s a particularly good director of actors. I reminded of the scene in Road To Perdition, where Paul Newman is gunned down, at night, in the rain, in slow-motion, and what should have been a moment of shocking violence – a turning point in the film – became instead all about fetishizing Conrad Hall’s cinematography. Similarly, in Revolutionary Road, the final image of Kate Winslet standing in her living room, looking out of the window, a small patch of blood blossoming on the back of her nightdress was so much more about Mendes’ painterly eye for composition, robbing the shot of its emotional heft.

Here, Mendes and Coens’ regular Director of Photography Roger Deakins conspicuously deliver high-end, memorable visuals. A night sequence in Shanghai, with Bond and his opponent fighting in a glass-fronted skyscraper, lit by a wash of neon light from the giant advertising signs outside is stunning, like a clean Blade Runner. A detour to a casino in Macau is shot in luxurious golds and yellows. The oranges and reds he washes over the final act give a striking sepia glow, but again you feel that the drama unfolding on screen is given second place to how its being presented.

Mendes, though, satisfactorily pulls his plot threads together. It comes as a surprise when you realize that the “Bond girl” in Skyfall isn’t really Naomi Harris’ shonky MI6 operative or Bérenice Marlohe’s femme fatale – but M herself, and the interplay between her and Bond is very much at the centre of the film. Indeed, for this anniversary film, the producers have dug a little into Bond’s personal history. The final third, set in the Scottish glens, where Bond’s back story is touched on, suggests at one point that Skyfall is going to go down the road of recent Doctor Who stories and get bogged down in overblown notions of its own inner-history. Fortunately, Mendes pulls its back before it navel gazes too deeply. M’s line – “Orphans make the best agents” – plainly delivered by Dench says enough, really, about why Bond is Bond.

I guess Skyfall feels quite personal. It’s not just the gentle prods into Bond’s own history, or the unspoken headmistress/pupil relationship between him and M, but the relatively parochial settings (mostly London and Scotland) and the make-do Straw Dogs finale that combined create a unusually intimate film, one that pays tribute to the series’ heritage but also confidently shows us the way forward. The message is: sometimes you have to go back to go forward.