There’s a scene in Cormac McCarthy's novel No Country For Old Men, where sheriff Ed Tom Bell and his deputy arrive at the site of a particularly grisly murder. “It’s a mess, ain’t it sheriff?” asks the deputy. Surveying the corpses and the wreck of a burned out SUV, Bell replies, “If it ain’t, it’ll do till a mess gets here.” 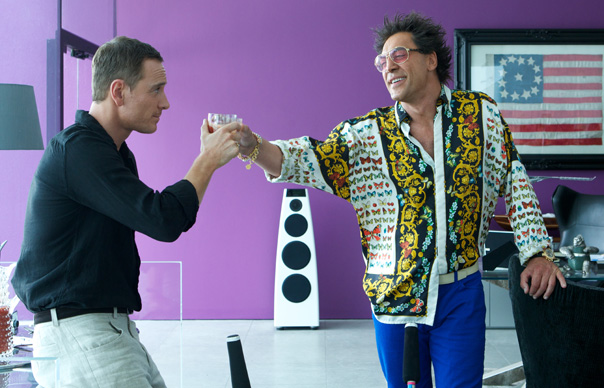 There’s a scene in Cormac McCarthy’s novel No Country For Old Men, where sheriff Ed Tom Bell and his deputy arrive at the site of a particularly grisly murder. “It’s a mess, ain’t it sheriff?” asks the deputy. Surveying the corpses and the wreck of a burned out SUV, Bell replies, “If it ain’t, it’ll do till a mess gets here.”

There’s a maxim writers tend to trot out when trying to put some distance between themselves and a particularly whiffy adaptation of one of their novels: ‘my book, their film’. In the event Cormac McCarthy tries something similar to disassociate himself from the shitstorm currently enveloping The Counsellor, it seems unlikely it would hold much credibility. Unfortunately for McCarthy, there has been much pre-release hoo-hahing about the fact The Counsellor is his first original screenplay: what McCarthy should take away from the experience is that what works well enough on page doesn’t necessarily translate successfully to screen. But McCarthy isn’t entirely culpable: as the film’s director, Ridley Scott clearly has some understanding on what works and what doesn’t.

Is The Counsellor really ‘the worst movie ever made’, as one review claimed? No, of course not; and I say that confidently as someone who’s watched Pirates Of The Caribbean: On Stranger Tides. The Counsellor is just extraordinarily odd. You could perhaps claim that The Counsellor is a bold and provocative artistic statement – although Ridley Scott is not exactly known for making challenging, unorthodox movies – or simply what happens when an acclaimed novelist makes an ill-conceived sidestep into movies in cahoots with a starry-eyed filmmaker who has fatally misjudged the author’s ability to deliver screen-worthy dialogue.

Let’s say, first of all, that I very much wanted to like The Counsellor: I like a number of Scott’s films, I thought Michael Fassbender (who plays the titular counselor) was the best thing in Scott’s last film, Prometheus – and more pertinently, I was broadly positive about the published screenplay. But the problem persists from page to screen, that the dialogue is elliptical and baroque. For much of the film’s two-hour running time, (mostly) men deliver long speeches to one another about greed, sex and death. Fine on the page, less so when delivered by other people.

The film concerns Fassbender’s Counsellor, who specializes in representing shady individuals along the Tex-Mex border. He succumbs to the lure of the once in a lifetime deal, involving 625 kilos of cocaine being transported from Mexico to Chicago in a septic tank. As you can imagine, everything goes tits up in a ditch. Along the way, we meet a tantalizing array of nightclub owners, femme fatales, drug cartel jefes, shady businessmen and killers. A typical McCarthy pre-occupation – the self-destructive choices a man makes – provides the film’s motor. This is ostensibly a world familiar from countless other movies – but unfortunately, it isn’t one that’s particularly suited to sustaining the dialogue McCarthy has written here, where long portentous speeches sit awkwardly in what is essentially a neo-noir thriller.

There is some fun to be had, particularly the scenes involving Brad Pitt and Javier Bardem. Pitt – whose audio book readings for McCarthy’s Border Trilogy are terrific, incidentally – plays Westray, a sharp-suited intermediary, while Bardem’s entrepreneur Rainer is a wearer of brightly coloured trousers and a spinner of tall tales. His hair is as hilarious as it was in No Country For Old Men. Fassbender, meanwhile, is curiously passive: the irony is that much of the film revolves around the counsel he receives from the other characters. I’m less convinced by Penelope Cruz as Laura – the Counsellor’s lover – and Cameron Diaz’ Malkina.

They show up McCarthy’s weaknesses as a writer: he doesn’t do love stories and he doesn’t write women well. Cruz has little to do about from look imperiled, while Cameron Diaz has a lot more to chew on with Malkina, but I’m not entirely convinced she’s successful in her endeavours. Malkina is an amplified femme fatale: we can tell that, because she keeps pet cheetahs, with whom she empathises far than her fellow human beings. In the film’s most extraordinary scene, she has sex with Rainer’s yellow Ferrari. What complexity McCarthy may have written into the character is airbrushed out in favour of some narrowing of the eyelids and pantomime pouts. Ooh, look: she’s got a tattoo up her back, she must be trouble.

Where I think the film works best is in the look Scott gives it: a sleek, designer quality that acts as a corrective to the trailer parks, motel rooms or grimy bars familiar from this kind of border yarn. Everyone wears crisp shirts, the furnishings look expensive, giant Macs twinkle discretely in the corner of airy apartment dwellings, the surface of swimming pools remain unrippled. Ultimately, though, it’s just a very confused film, tonally flat and slightly dull yet capable of moments of jaw-dropping strangeness. I keep thinking – maybe this is all deliberate, maybe this is Scott completely upending our received notions of what a mainstream movie should be. Maybe it’s head-spinning genius.

But yet. Would a conscientious script editor, a director less in thrall to the writer or simply significant cast changes have made it better? It’s foolhardy to speculate, of course, and I wish I could be more positive about it. You could argue that the reason why so few of McCarthy’s books have made it onto the screen – Scott himself spent years trying to film Blood Meridian – is that his writing is far too disconnected from conventional filmmaking orthodoxies to work. Which isn’t entirely the case – both No Country For Old Men and The Road worked very well, but the Coens did good, if subtle work to streamline the former while the latter was light on dialogue in the first place. There’s an adaptation of an early McCarthy novel to come – Child Of God – and advance reports at least seem favourable. Which perhaps makes the failures of The Counsellor all the more galling.

THE COUNSELLOR OPENS IN THE UK ON NOVEMBER 15