Speaking to Uncut around the release of The Proposition, Nick Cave conceded, “The whole thing was a struggle. So much effort was put into it. It’s the most agonising, frustrating business to be in. Years go by trying to get something off the ground – one idea! It’s unbelievable, the vision you have at the beginning is constantly chipped away at, and you haven’t even filmed anything.” 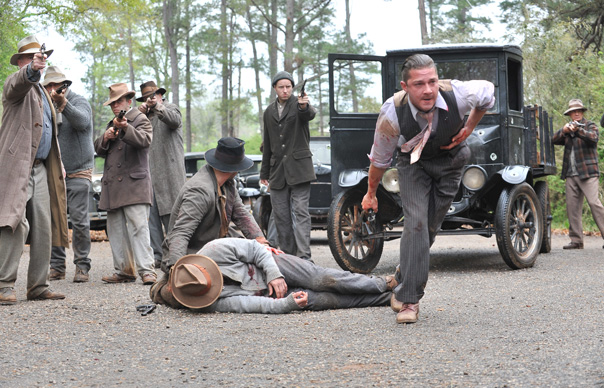 Speaking to Uncut around the release of The Proposition, Nick Cave conceded, “The whole thing was a struggle. So much effort was put into it. It’s the most agonising, frustrating business to be in. Years go by trying to get something off the ground – one idea! It’s unbelievable, the vision you have at the beginning is constantly chipped away at, and you haven’t even filmed anything.”

By the time The Proposition screenplay finally went before the cameras in the summer of 2004, it had been through almost a decade of rewrites, endured wearisome financial wrangles and scheduling conflicts. With this in mind, you could be forgiven for wondering why Cave persists with his film projects. For someone with such a clearly defined creative agenda as Cave, who presumably enjoys final say over his music with the Bad Seeds or Grinderman, it must be especially infuriating to adopt a defensive position when shepherding through extra-curricular projects like screenplays.

But The Proposition is one of the lucky ones that got made. The most famous of Cave’s lost scripts is his screenplay for a mooted sequel to Gladiator. At the invitation of the film’s star Russell Crowe, Cave worked up a script that envisaged Crowe’s character Maximus, who died at the end of the original film, resurrected by ancient gods and sent back to Earth. “For some ridiculous, fucked-up Hollywood reason, he can’t die and goes and fights all the wars in history,” Cave explained (you can see Cave discussing the project in the clip below).

There were plans to collaborate again with The Proposition director John Hillcoat, this time on a yarn about the exploits of a lecherous travelling salesman set in Cave’s adopted hometown of Brighton, provisionally titled Death Of A Ladies Man. The writer and director even had a star attached to the project – Ray Winstone. But the project stalled and Cave eventually converted his screenplay into the novel, The Death Of Bunny Monro.

Since then, Cave’s name has been linked – accurately or not – to several other film projects, among them a stop-motion adaptation of Brecht’s The Threepenny Opera and rewrite duties on a remake of The Crow. Neither of these sound like half as much fun as his sterling voiceover work on an animated short called The Cat Piano (see below).

Meanwhile, Cave and Hillcoat have finally managed to get another film off the ground: an adaptation of Matt Bondurant’s 2008 novel, The Wettest County In The World. As with The Proposition, the focus of Lawless is on three brothers – the Bondurants, who’re running their moonshine business from the hills of Franklin County, Virginia during Prohibition. The relationship between criminals and the law is a recurring theme in all of Cave’s (produced) screenplays. You might think of the guards and inmates locked down in Central Industrial prison in Hillcoat and Cave’s first collaboration, 1988’s Ghosts… Of The Civil Dead, or the Burns gang and their dealings with the colonial police in The Proposition. Indeed, it’s easy to see the appeal of Bondurant’s book to Cave. The prose is lyrical – the nods to Cormac McCarthy are there – the violence almost constant, from the opening scene of a pig being slaughtered onwards, and the patterns Bondurant divines in the story seem to reach for something more profound than a simple hillbilly gangster tale. In Forrest Bondurant, the seemingly indestructible eldest brother, Bondurant has created a character as mythic as The Proposition’s Arthur Burns.

It’s been retitled Lawless, which feels as generic as it comes. The soundtrack is a strange fish. The incidental score – a moody, minimal thing from Cave and Warren Ellis – feels like a welcome continuation of their work on The Proposition and Hillcoat’s Cormac McCarthy adaptation, The Road. But there is also a second soundtrack, performed by The Bootleggers (Cave, Ellis, Martyn Casey, George Vjestica and David Sardy) with guests including Mark Lanegan, Emmylou Harris and bluegrass musician Ralph Stanley. They perform a mix of covers – the Velvet Underground, Townes Van Zandt, Link Wray – alongside original compositions. It doesn’t entirely work. The covers are too disruptive (“White Light/White Heat” over a montage of scenes from the 1930s), and you might wish for more contemporaneous folk ballads from the Smithsonian Folkways vaults.

The acting, though, is tremendous. Is there a more watchable actor at the moment than Tom Hardy? As Forrest Bondurant, he speaks in a slow, deep voice that sounds like a creaking door hinge. His bulk is immense. Guy Pearce, as the Special Deputy sent to bring the Bondurants to justice, is a perfumed, preening sadist, who brings to mind Eden Fletcher, the English landowner in The Proposition, with his declaration to “civilise this land.” Certainly, Pearce’s Charley Rakes would have fitted in well amongst The Proposition’s cast of grotesques.

There is a good extended cameo from Gary Oldman as a mob boss who gets to do something unpleasant with a shovel, while Shia LaBeouf tries hard as the youngest Bondurant, Jack, a nervous figure, trying manfully to live up to his elder brother’s expectations.

It is mostly good stuff. But I wish it had a cleaner, leaner sense of purpose, like The Proposition, and more surprises, too. If Cave and Hillcoat’s previous film was as hard and inhospitable as the Australian Outback, then this feels a mite too loose, as if writer and director have been sipping away on the grog coming out of those hills and let their focus drift.

Lawless opens in the UK on September 7.